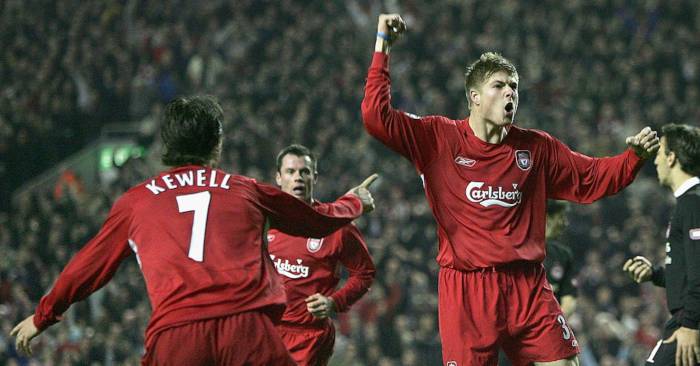 David Fairclough (European Cup quarter-final, March 1977)
“Supersub strikes again!” shouted Gerald Sinstadt as David Fairclough’s held off two defenders to slip the ball under the Saint-Etienne keeper and send Liverpool through to the European Cup semi-finals, but the truth is that the 20-year-old had not done a whole lot of super-subbing that season because of the form of Kevin Keegan and John Toshack. When he replaced the latter with 17 minutes to go – and the French side leading on away goals – nobody expected Fairclough to produce the strike that rescued a campaign that would end in glory.

Gary Gillespie (First Division, May 1986)
A centre-half? Scoring a hat-trick? It can only be Gary Gillespie against Birmingham City as Liverpool were chasing the double. Ian Rush had opened the scoring but then Gillespie took over – scoring a header before a very un-centre-half-like goal after a one-two with Rush following a charge up field. Then when Liverpool won their second penalty of the game, the crowd gave Jan Molby no choice but to hand the ball to Gillespie. A few weeks later he didn’t even make the squad for the FA Cup final.

Bruno Cheyrou (Premier League, January 2004)
It had been a ridiculous 14 years since Liverpool had won at Chelsea when Gerard Houllier took his charges to Stamford Bridge to play a Blues side chasing the title. Their line-up? Dudek, Henchoz, Hyypia, Traore, Biscan, Diouf, Murphy, Hamann, Cheyrou, Heskey, Kewell. So of course it was Bruno ‘new Zidane’ Cheyrou who scored his very first (and penultimate) league goal for Liverpool. Well done, Bruno, son.

Neil Mellor (Premier League and Champions League, November/December 2004)
First there was the stoppage-time 30-yard screamer to beat Arsenal but then there was that game against Olympiakos. You know the one. When Mellor entered the fray with 12 minutes to go – replacing Milan Baros – Liverpool were heading out of the Champions League. First he scored to make it 2-1, and then he set up Steven Gerrard with a cushioned header for what was one of the most famous Anfield European nights. Double knee surgery meant that he could only watch as Liverpool triumphed in Istanbul…but he had more than played his part in getting them there…

Vladimir Smicer (Champions League final, May 2005)
It does still seem absolutely mental that Liverpool won the Champions League with Milan Baros playing up front, though it was another Czech who emerged as one of the heroes of Istanbul. Smicer had not even started any European games on the road to the final (and had started only two Premier League games that season) but when Harry Kewell got injured after 23 minutes, it was Smicer who stepped off the bench. And it was Smicer who scored Liverpool’s second goal of their glorious comeback. Oh and added a penalty in the shoot-out for good measure.

Alvaro Arbeloa (Champions League last 16, February 2007)
Not a goalscorer this time, but a defender making his very first start for Liverpool – out of position at left-back, in the Nou Camp, up against Lionel Messi. He basically smashed it and the Reds triumphed 2-1 thanks to goals from Craig Bellamy and John Arne Riise. Two years later he was heading back to Real Madrid, who would have been as impressed as the Spaniard was on Tuesday night…

Congrats to @LFC!
What a night!!! UNBELIEVABLE! 🙌🏼🙌🏼
Hope to see you in Madrid winning the @ChampionsLeague! Go, Reds!!!_#YNWA

Andrea Dossena (Champions League and Premier League, March 2009)
The Italian was a pretty disastrous choice at left-back but he proved something of a cult hero as an auxiliary winger, enjoying one week in the sun in which he scored the final goal in an unlikely 5-0 thrashing of Real Madrid and then the final sumptuous lobbed strike in a 4-1 win over Manchester United at Old Trafford. Delicious.

Then there's how @LFC's Andrea Dossena did it… 😳#MUNLIV pic.twitter.com/GcxBkXDYjo