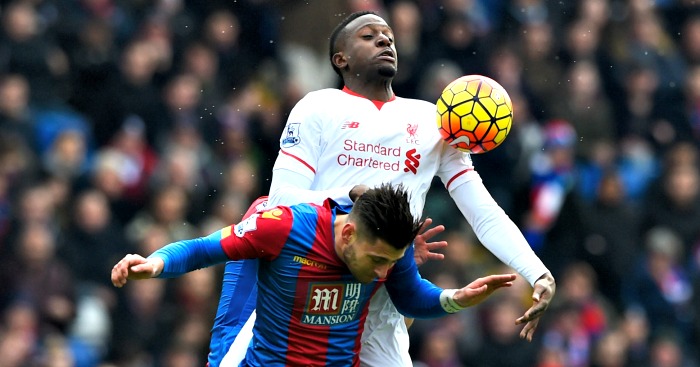 “That is my target for the rest of the season, to maximise my game time. And of course to score goals and do well against Manchester United.”

For a crash course in how to quickly earn the respect of Liverpool fans, one would be well-advised to look towards Divock Origi. Speaking earlier this week, the Belgian revealed his three objectives for the remainder of his first season at Anfield: Play more. Score more. Beat Manchester United. The first step towards becoming a cult hero is complete.

For Liverpool, it was almost once again one step forward and five steps back. Jurgen Klopp acknowledged that consistency has not been the “hobby” of his players this season; that is an understatement. As impressive as the Reds were against Manchester City four days prior, they were insipid and uninspired against Crystal Palace. Yet Palace conspired to hand their opponents all three points with two costly mistakes. Klopp will be delighted that his players fought until the end, but it was not pretty.

The German has much to do at Anfield, but finding a remedy for the club’s inconsistency on the pitch must rank high on his bucket list. ‘As impressive as beating Manchester City is, Klopp must now ensure Liverpool back it up,’ was the challenge set in Big Weekend. ‘Making a statement is pointless when you whisper after being asked to repeat it.’ It was not exactly a resounding reply in terms of the performance, but the result is what matters. Faint Champions League hopes remain intact.

Among the biggest culprits on Sunday afternoon was James Milner. The 30-year-old was naive in receiving a yellow card for a first-half foul on Yohan Cabaye; he was simply mindless in committing a second bookable offence 20 minutes later. With his club 1-0 down, their most experienced player, the midfielder with over 400 career Premier League appearances, Mr Dependable himself, almost cost his side gravely. He remains the vice-captain with no place at Liverpool.

But where Milner once more failed to offer a positive impact despite his much-vaunted experience, the unpolished Origi continued his campaign to become a valued and established member of the Liverpool squad.

Origi will know such a journey is arduous. The striker has already experienced half a career despite having not yet even turned 21. A target for a number of Europe’s biggest clubs in his formative years. A goalscorer for Belgium in the 2014 World Cup. A veteran of three full seasons in Ligue Un. A £10million footballer.

The forward has been under immense pressure since Liverpool paid Lille that sum for his services in 2014. Origi was signed by Brendan Rodgers in that fabled summer in which the Reds spent over £100million, hoping to replace Luis Suarez with Rickie Lambert, Mario Balotelli and Lazar Markovic. The Belgian was immediately loaned back to the French side, and was subsequently voted in the Ligue Un worst team of the season for 2014/15. The 20-year-old had been summarily written off at his new club without even kicking a ball.

Against Palace, Origi showcased why he can be a success under Klopp. Tasked with playing the role of lone striker against a central defensive pairing boasting 28 combined years of experience in the English Football League, the Belgian did not wilt. Both Scott Dann and Damien Delaney have dealt with every type of striker during their respective journeys from League Two to Premier League, yet Origi was a constant nuisance for both. His unflagging desire to test a resolute defence, despite being offered little in the way of support – see the average position of Liverpool’s attacking players below – will not have gone unnoticed by Klopp.

Origi is undoubtedly not the finished product – he is not even approaching that yet – but he has the ingredients to become a Premier League striker. The Belgian has pace and energy – only three players on the pitch made more sprints (61). He boasts strength and endurance – only Wilfried Zaha and Dejan Lovren competed in more duels (15), and only Zaha was fouled more often (four times); he provides the mobile focal point of an attack. Klopp demands each attribute in any forward. Origi’s efforts may have gone unrewarded, as he failed to score with any of his four shots, but his tireless stretching of the defence precipitated Liverpool’s comeback victory.

The £10million price tag, the unwanted accolades from his time in France, the expectation from his country, all could have weighed down Origi when he finally arrived at Liverpool this summer. Uncertainty surrounding the managerial situation merely compounded his task. But the 20-year-old has dealt with each adversity admirably, and deserves his place in the squad. Daniel Sturridge is the starting striker when – God forbid – each player is fit, but Origi is battling valiantly with countryman Christian Benteke for the place behind him in the queue. That in itself is a victory.