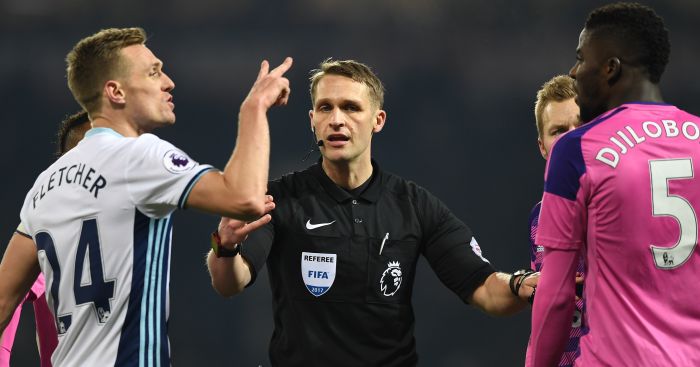 Djilobodji was charged on video evidence after match referee Craig Pawson did not spot an incident in which he struck out at West Brom skipper Darren Fletcher during last Saturday’s 2-0 Premier League defeat at the Hawthorns.

An FA statement said: “Papy Djilobodji will serve a four-match suspension with immediate effect after his violent conduct charge was found proven.

“It was alleged the Sunderland defender was involved in a 86th-minute incident with West Bromwich Albion’s Darren Fletcher on Saturday which was not seen by the match officials, but was caught on video.

“He denied the charge. However, it was found proven following an Independent Regulatory Commission hearing. The suspension includes the additional standard game as it was the player’s second dismissal this season.”

Djilobodji will miss the Premier League clashes with Tottenham, Crystal Palace, Southampton and Everton as a result and will not be available to play again until Manchester City arrive at the Stadium of Light on March 5.

The 28-year-old Senegal international, an £8million summer signing from Chelsea, was sent off for two bookable offences in a 3-0 home win over Hull on November 19.

He has endured a chequered start to his career on Wearside, although his enforced absence will come as a fresh blow to manager David Moyes as he attempts to drag the club from the foot of the league table.

Moyes has already been told he will have little or no money to spend this month and has had Lamine Kone, Didier Ndong and Wahbi Khazri away on African Nations Cup duty amid a crippling injury crisis, although Kone and Ndong as due back soon with both Ivory Coast and Gabon out of the competition.

In addition, left-back Patrick van Aanholt is close to sealing a move to Crystal Palace for a fee which it is understood could eventually rise to £14million.

Free agent Joleon Lescott, 34, has been handed a short-term contract until the end of the season, while club officials are in talks over a loan move for Bordeaux full-back Diego Contento.