Home Mailbox Do Arsenal need to ‘do a Liverpool’ and bin Emery? 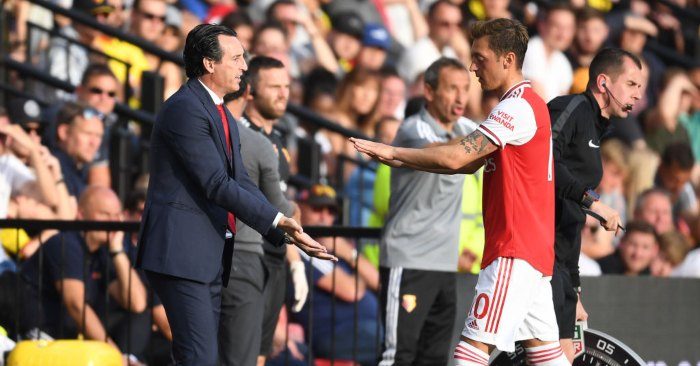 We have mails. Lots of mails. Keep them coming to theeditor@football365.com

Follow Liverpool example and bin off Emery
Liverpool sacked Brendan Rodgers in October to bring in a brilliant manager, even if it meant writing off that current season. It was obvious things weren’t going to get better under Brendan, and look at them now. Two successive Champions League final appearances and their highest ever Premier League points total, all within four years of appointing Klopp.

Time for Edu, Raul and Josh at Arsenal to do the same. Bin Emery and work their magic on bringing Allegri to Arsenal before Man Utd get to him.

…It’s the second half at Vicarage Road, Reiss Nelson has lost the ball again, Watford get the ball and for the umpteenth time get to have a go at the Arsenal defense unchallenged. There is an obvious gap between the Arsenal forwards and the Arsenal defense, something I rarely see when Man City or Liverpool play. Sokratis and Luiz did not cover themselves in glory but the amount of time they had to firefight was too much. For a coach that invested so heavily in the summer, his inability to coach even an ounce of defensive sensibility into his team is very worrying. For Watford to have 31 shots on target it’s not a problem with the defense, it’s a problem with the team. For the coach to fail to instruct Reiss to hold onto the ball rather than run at Watford is in itself dereliction of duty.

Unai lost a one-horse race championship back in France and I have seen him for over a year and he has completely failed to coax any semblance of defensive stability in the team. No one is tracking back, no one is going with their runners, his players seem eager to attack than defend and that smacks of Wenger’s final seasons in charge. Unai is being kept afloat by the good attacking players at his disposal, but his failure to organise a team into a defensive shape should make him go. I would rather have Tony Pulis and his defensive stability than loosing to a two goal lead to the bottom club.
Okembo, Kenya

Time is running out for Emery
Arsenal have conceded 96 shots on goal this season so far. More than any other team in the Premier League, Serie A, Bundesliga and Ligue 1.

We let Watford, a team bottom of the league, have 31 shots on goal. That’s crazy. Thank God for Aubamayeng and Leno because I don’t know where we’d be without them.

Not sure about most Arsenal fans, but my patience with Emery is wearing thin. We don’t seem to be any better under him than we were under Wenger. That’s not to say Wenger shouldn’t have left. However, at least under his tenure we had a semblance of identity. Now we don’t seem to know what to do.

We have a very, very strong squad. One that is not performing up to the standards it should be. I don’t know how long a manager needs to ‘refine’ his players however, it looks like time is running out for Emery.
Malcolm, AFC

…Watford deserve credit for their dominant display against Arsenal. However, Arsenal repeatedly hold a gun to their heads!

Opposing teams have been coached to negatise Arsenal and utilise their mistakes. Arsenal players should be coached to read opposing teams’ approaches to their own game and capitalise back (i.e. utilising our impressive, speedy forwards rather than build up at snails place!). Watford played us at our supposed own game today. The thing is, they know how to do it, we don’t!

Emery needs to swallow his pride and utilise his talented squad to the best of their abilities !

Dare I say, I would be more confident with Wenger in charge?
Chris, Croydon

…First time writing in so I will keep this short. Deeney was spot on; this team has no f*cking cojones to achieve sh*t. The arrogance and smugness of the prima-donnas, strolling around like Watford owed them 3 points.

Calamity Luiz seems to have bets on stretching his stupid decisions each week. Xhaka being absolutely useless as usual.

I hope that Pepe finds his stride but on the evidence this far, I am overwhelmingly underwhelmed.

Also, what is this obsession from Emery on playing from the back when you have a back four that can’t be trusted to keep their heads?

What a shit show that was. These players owe Aubameyang their week’s salaries.
Martin, USA

…What has Emery improved at Arsenal? They don’t control the game as they should, they can’t defend, can’t press, can’t close down crosses. Attacking intent is predictable. The only unpredictable thing he does is the formation and which players to start.. it’s increasingly frustrating.
Jay

…I’m one of the more patient Arsenal fans. In fact I was mostly Wenger in until part way in to his final season.

However, Wenger was castigated for repeating the same mistakes and not learning from them. Emery has done that in every game I’ve seen so far with the defensive system. At least a Wenger side gave you some faith they might outscore the opponent. In the second half they seemed clueless and it felt as though there was zero chance, even with Aubameyang on the pitch.

Why take Ozil off? I was sitting in a pub next to a Gooner who was going on and on about how rubbish he was. However, he showed some great touches and you always felt he could find a way through. The problem is, I love Ozil, in spite of his price tag. There, I said it.

Guendouzi had an off day, which is unsurprising from a 19 year old. Sadly, I think his confidence was badly affected and that was mainly to do with the inexplicable attempt to continually pass out from the back. Bringing me back to the point I originally alluded to. It. Does. Not. Work.

Emery, we don’t have the defenders or defensive midfield for the game you’re trying to play. Just please, for the love of the man upstairs, just slow your pony and wait for the next transfer window (or two), buy a ball playing centre back and/or Doucoure.

Phew, got that off my chest.
JazGooner

…Calum Chambers not starting for Arsenal at this point is a travesty.

Sokratis and Luiz together are not good enough. Too slow, too dense and too error prone.

They paid for Luiz!
As a long-time Chelsea fan and as someone who has followed and loved Luiz since his first move to Chelsea, it was a great disappointment to me that Luiz was sold to one of our top 4 rival.

However, I am starting to feel it was a master stroke to sell Luiz to our rival , allowing him to continue helping us from outside.
B CfC (We got paid too !)

There is still Arsenal hope!
I know a lot of people will be continuing the narrative of Arsenal’s defence being terrible (it is) and that Arsenal won’t be playing Champions League football again until we improve our defence (we won’t).

However what people choose to ignore because it does not fit ‘the narrative’ is that three of Arsenal’s first choice back four are injured. Hector Bellerin, Rob Holding and Kieron Tierney will significantly improve this defence.

Do not write off the chasers yet…
Just one reaction to Matt Stead’s gloomy piece about the chasing pack: let’s see where things are after 10 games. I know it’s fun and journos need their clicks but it’s a fools game making broad, predictive pronouncements less than 10 games in. Previous years have had an upstart chasing pack team in the top six places around this time, who then inevitably fall away. That we don’t right now might be a good omens that come May the top six will not be the usual suspects after all.
Miguel LFC – (Come on Norwich – let’s be having you!)

Firmino is Liverpool’s ‘point forward’
Aman is onto something, though ‘defensive striker’ conjures images of Emile Heskey scuffing chances, or ‘defensive winger’ Dirk Kujt chugging up and down the right, then blasting his shot into Row Z. In reality, Bobby plays a number 10 role, but at the top of our formation, the ‘point’ of attack, higher up the pitch than is traditional.

As a lifelong basketball fan, the obvious comparison for me was Michael Jordan’s sidekick on those all-conquering 90’s Chicago Bulls teams, Scottie Pippen. Jordan (and Nike and the ’92 Olympics) elevated basketball from a American-only sport to the second-most popular sport on the planet, but his legend wouldn’t have made the same impact without those six Championships, and those six Championships wouldn’t have been possible without the contributions of Scottie Pippen.

#33, more so than even Jordan-himself, changed the game, the first ‘Point Forward’. At 6′ 7″ (2m), with long arms and quick feet, he was the first Forward to bring the ball up and start the offense instead of the Point Guard. He was the original model of today’s prototypical “modern” basketball player. Phil Jackson’s “Triangle” offensive system assigned its PG the primary role of accurately shooting 3 pointers to create space for Pippen and Jordan to attack the defense facing the basket.

Limited by a 24 second shot-clock, the Bulls offense saved precious seconds by having its best facilitator cross half court with the balland draw the attention of the defense. Jordan would set himself up onone side of the court and the rest of the team would clear out into deepshooting positions so it was often Jordan and Pippen alone on one side of the court, as soon as Pippen made his move toward the 3-point line, the defense was instantly under pressure. He could get it to Jordan for a quick one-on-one, take it to the hole himself, or drive-and-kick to a wide open shooter whenthe defense tried to ‘cheat’ by sending an extra defender. Essentially, the defense had the choice of being shot, stabbed or poisoned (most chose all three).

On defense, Pippen took either the opponent’s best offensive player or their best ballhandler. Typically, in half court defense, Pippen led the press as the focal point of the defense, high up in the center of the opponent’s backcourt, wreaking havoc with those long arms and quickfeet. Any turnover resulted in an instant-transition and the Bulls won countless “easy buckets” due to Pippens positioning, intelligence, confidence with the ball and incredible (and under-rated) passing ability.

In many ways, Firmino is playing a similar “Pippen role” for this Liverpool side. His movement alone arguably creates as many chances as he does with the ball at his feet. He leads the press from the front and facilitates the side in transition. In tight spaces, his close control, creative and adept passing and finishing ability create space and opportunity for his strike partners. He’s as complete a footballer as Pippen was a basketball player.