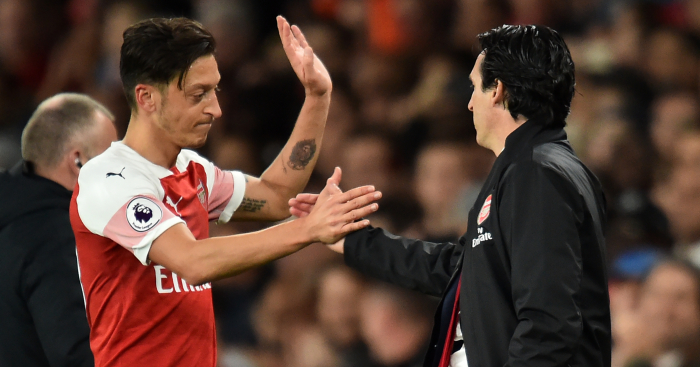 Diamond cutter
‘Cristiano Ronaldo plans to put on a sparkling display tonight on his return to Old Trafford, arriving in Manchester loaded with diamonds,’ reads the first paragraph to Mike Keegan and Harry Slavin’s back-page (yes, back-page) story for the Daily Mail.

‘The show of wealth from the Juventus forward comes weeks after rape allegations were made against him.’

And your point is…?

The perfect 1Ö
Mesut Ozil was really good on Monday. Really good. He was even worthy of an 8/10 rating from The Sun after scoring one goal, assisting another and playing a key role in a third against Leicester. Their ratings are supplied by WhoScored, so of course they have rounded his mark down from 8.94. Because that’s normal.

They dub him the ‘WIZARD OF OZ’ in their match report, which happily ignores the pronunciation of his actual name. Thankfully, Neil ‘Never Knowingly Undersold’ Ashton is the author of said match report, and had plenty to say.

‘They have the perfect 10,’ he begins. ‘Mesut Ozil, wearing the captain’s armband on one of those dreamy Arsenal nights, scored one and made the next two with a spellbinding display.’

Ashton goes on to praise a ‘mesmerising’ game from the ‘irresistible’ German, describing it as ‘one of the best individual performances in recent memory’.

‘It is not often you get to witness something like this,’ he adds. ‘When the mood takes him he is untouchable, one of the best players in world football.’

Some lovely praise, and completely warranted after that game. Good stuff.

But two months ago Ozil was a ‘sniffling playmaker’, a ‘sore loser’, an ‘overseas fancy-dan’ and a ‘ballerina’ who ‘has been on easy street’ since he signed his new contract.

Oh, and Arsenal offering that new contract was a ‘catastrophic decision’, particularly considering Ozil’s career was ‘at another crossroads’.

Back then, he was a ‘mercurial and moody No  10’. A few games later, he is ‘the perfect No 10’. Even by Ashton’s standards, the U-turn is spectacular.

One question: is he still ‘nicking a living’?

Outrage against the machine
In December 2013, Martin Samuel wrote that John Terry calling Anton Ferdinand a “f***ing black c***” was ‘ultimately meaningless’. It was, he said, ‘abuse, pure and simple. Horrid, racist abuse.’ But it ‘was for private consumption’, ‘in the context of a game, and was not intended to be heard beyond that game’.

‘The words may be offensive but they do not go anywhere,’ he would add.

And so to Tuesday, where he is busy rightfully admonishing football for ignoring abuse for too long, leading to England international Karen Carney being subjected to some vile threats last week.

‘In 2013, West Ham visited Tottenham and repeatedly sang a song calling Jermain Defoe a c***,’ he writes in the Daily Mail.

‘Had they placed ‘black’ in front of it there would have been outrage. But c***’s OK.’

Except when someone did place ‘black’ in front of that word, there was no ‘outrage’ from certain people, was there Martin? It was ‘ultimately meaningless’, remember?

‘It isn’t just those two [Klopp and Mourinho] guilty of excuse-making, because you can guarantee Sam Allardyce would have said the same as Klopp had the foul been on a Liverpool striker by an Everton defender.

‘Burnley’s Sean Dyche is the only manager who’ll say, ‘Yep, we were awful today’, or ‘Actually, we were great’ – and how refreshing that is.

‘The rest of them deflect from their own inadequacies and it’s like being in the playground rather than listening to a professional interview with a Premier League manager.’

‘I want the old Sean Dyche back, the one who comes in after games and says, ‘You know what, we played against a top-quality side, they were better than us and that scoreline is going to be replicated against other champions League teams at times this season. One or two things went against us but that’s that’.

‘Managers don’t need to go into specifics, as Dyche did on Saturday following Burnley’s 5-0 gubbing by Manchester City, otherwise it looks like they’re moaning. And he never used to.’

Just because you never noticed it, doesn’t mean it never happened, fella.

Group task
In his main column for the Daily Mirror, Stan Collymore discusses the struggles Premier League sides are facing in the Champions League this season. ‘There are three reasons our sides haven’t romped away with their Champions League groups in the manner I predicted they would,’ he writes.

‘1) Complacency.
‘2) Quality of scouting across Europe.
‘3) And the competitiveness of the Premier League.’

May Mediawatch offer a fourth option: that you massively overestimated English sides and underestimated their European counterparts if you expected them to ‘romp away’ with a group after two games?

Liverpool beat the top seeds in their group before losing away at one of the most daunting stadiums in the world. Manchester City lost to Lyon and scraped past Hoffenheim, but we are not sure ‘the competitiveness of the Premier League’ had anything to do with it. Manchester United have won and drawn their opening two games, and Tottenham were beaten by Barcelona and away at a side who have won their last seven games.

Perhaps each of them could have done better – and definitely so in the case of some. But suggesting they have not taken the Champions League ‘seriously from the start’ is a bit much.

Serg of adrenaline
Collymore also suggests he ‘would be very pleased’ if Manchester City won the Champions League. Which, for those who remember his almost constant bashing of Pep Guardiola, is more than a little humorous.

The main reason Collymore wants City to become European champions is for Vincent Kompany and Sergio Aguero: ‘two fantastic servants’ who ‘have helped change the face of their club’.

‘As an ex-striker, I love to watch Aguero,’ he writes. ‘I know he has had the sort of players around him for years now that any forward would love, but the fact he has had only one wobble in eight years, when Pep Guardiola arrived, is very impressive indeed.

‘Aguero will be remembered as one of the great Premier League strikers long after he calls it a day.’

Not bad to say you couldn’t ‘put the Argentinian in the same bracket as those all-time greats’ ten months ago.

King of the Castles

Pep Guardiola has been given the most expensive squad in the history of football in order to win the Champions League, yet he’s still citing Manchester City supporters as a reason why his team may not be ready to do so. #MCFChttps://t.co/0l3rK9OvRq pic.twitter.com/HhCfcKfT7v

A headline we didn’t expect to see in October 2018
‘Ederson shows Pep was right about Hart’.

Quite how it took the Daily Mail one Premier League title and 37 wins from 45 games to finally come to that conclusion is beyond Mediawatch.

Unexpected job recommendation of the day
‘I don’t know what Mark Hughes brings to football clubs as a manager – I can’t pigeonhole him and there doesn’t seem to be a unifying thread between all his clubs. But what I do know is that, as a very bright guy who understands the game as a player and a manager, he’d make a very good director of football.’

FAO everyone: Never put Stan Collymore in charge of recruitment.

Recommended reading of the day
David Squires on Jose Mourinho, back at Chelsea.

Adam Crafton on one night in Turin.