Home F365 Features Do Chelsea fans still have reasons to be cheerful? 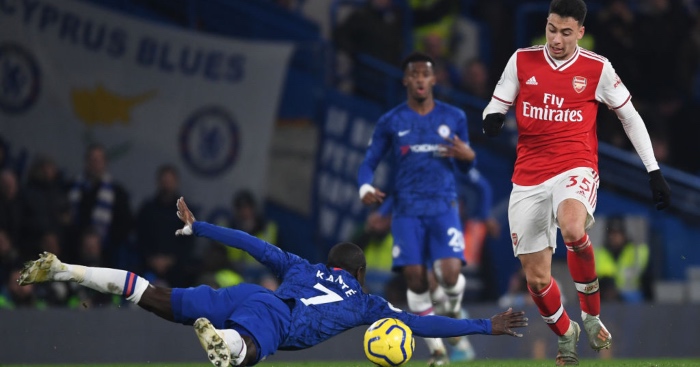 As Chelsea somehow solidified their position in the top four despite a dire season-typifying 2-2 draw at home to Arsenal on Tuesday night, we look back at our six early-season reasons for Chelsea fans to be cheerful, and question whether they can still be so optimistic…

1) Lampard tinkering hinders porous defence
Chelsea have kept just five Premier League clean sheets this season and no club in the top eight has conceded more than their 32 goals.

Kepa Arrizabalaga hasn’t been great – more on that later – and Chelsea have made no secret of their desire to strengthen at left-back, a hankering that can only have increased following Emerson’s paltry defensive attempts against Arsenal.

But Frank Lampard isn’t helping. Who knows Chelsea’s best centre-back partnership? Lampard sure as shit doesn’t. Kurt Zouma and Andreas Christensen started the season, Fikayo Tomori came in for Christensen, Tomori made room for the fit-again Antonio Rudiger and now it’s Christensen back to partner the experienced German. All of this interspersed with curious, seemingly unfounded rumours of a Stamford Bridge return for Nathan Ake.

Lampard has made a lot of positive changes this season, but a tenet of former Chelsea glory was consistency in the centre of defence. The Blues have four pretty good centre-backs; they just need their manager to decide which two are ahead of the rest and then stick with them.

Despite early-season optimism after four goals and two assists in the opening ten Premier League games, Mount has registered just one goal and one assist in the 14 games since. And crucially, just one assist – in the 2-1 win over Arsenal – and no goals in the Big Six games Mystic Meg Mourinho would class as a higher “dimension”.

Ironically, the Spurs boss saw at first hand just how good Mount can be as the 21-year-old put in one of his best performances of the season in the 2-0 win over Tottenham just before Christmas, a game in which Tammy Abraham also proved he has that “little bit more”.

Magic at the Bridge 🎩

They’re both still young and have had very good debut Premier League seasons for Chelsea, but Mourinho might well be feeling pretty smug as he watches Mount look a little lost as 2019 becomes 2020.

3) The defensive midfield conundrum prevents midfield fluidity
N’Golo Kante is a serviceable box-to-box midfielder, but he was – and probably still would be – the best defensive midfielder in the world. In Leicester and Chelsea’s title-winning seasons he was an eight or nine out of ten in every game he played – the consistency was remarkable. In his box-to-box role those top performances are outstanding in their infrequency.

But what on the surface seems a simple decision to drop Kante deeper is made far more difficult by the form of Jorginho. Chelsea looked totally lost before he came on at half-time in the away win over Arsenal just after Christmas and Lampard is understandably keen to keep Chelsea’s ‘driver’ in the team.

Against the top teams, playing both is a good option, with the indefatigable Kante providing the defensive legs while Jorginho keeps possession. But against the lesser teams, the Blues need more of a threat from midfield which should mean one or the other – but not both – in a deeper role. That leaves a space open for Ruben Loftus-Cheek – who seems to have been on the verge of a comeback since the start of the season – to provide more of a driving force and goal threat from central midfield.

But it’s in games like the smash-and-grab 1-0 defeat to Newcastle that Chelsea really miss the brilliance of Eden Hazard. The inability to break down two banks of four has been a real problem at Stamford Bridge in particular. Hazard would just run through the packed defence, score a goal and then smile as if to say ‘What were you worried about?’.

If you really squint it is possible to mistake Christian Pulisic’s low centre of gravity and fleet of foot with the wizardry of Hazard. But as is also the case with Willian and Callum Hudson-Odoi, more often than not a shot is hit straight at the keeper or a cross is delivered ‘into an area’ rather than with a specific target in mind.

The blame for the poor conversion of chances has inevitably been aimed almost entirely at Abraham, who has actually scored two more goals than Mo Salah, Sadio Mane and Raheem Sterling this season. The problem isn’t with the lone striker, but that he is far too alone. He needs help from the Hazard pretenders, or from the Chelsea fan terrorising Bundesliga defences for Borussia Dortmund.

The Spain international has the worst save percentage of any goalkeeper in the Premier League and ranks 127th out of 132 goalkeepers in Europe’s top five leagues. He’s not dropping any clangers – he’s made no ‘errors leading to goals’ in the Premier League this season – but also consistently concedes goals that beg the question: ‘Could he have done better?’

Shots burst through his hands with irregular regularity, he has the penalty-area presence of the pre-pubescent David De Gea and his irritating faux confidence with his feet will get him into trouble sooner rather than later.

But he can make great saves, and he is good with his feet – he’s not a terrible goalkeeper. Just as De Gea wasn’t terrible when he endured his own sticky start in the Premier League. But De Gea realised his weak points would be tested more in the Premier League and worked on them. Which is exactly what Kepa must do. Or he will be replaced.

6) Fans stand behind Super Frank, for now…
With a Champions League last-16 tie against Bayern Munich on the horizon and their team in the driving seat for a top-four finish, it’s little wonder Chelsea fans are still backing Lampard.

But there was a smattering of boos after the final whistle on Tuesday and the source of that frustration is understandable. Either Lampard isn’t learning from his mistakes or the players aren’t following his instructions.

Game management has been the issue throughout the season. In the Champions League they were punished against Valencia for their hell-bent approach to score goals they didn’t need and could easily have been knocked out by Lille after getting the willies at the end of 80 minutes of total control. And their tally of ten goals conceded in the last ten minutes of Premier League games – the most of any team – perfectly illustrates their inability to close games out.

Their inexperience, or naivety, or downright stupidity, was again their undoing against Arsenal. Tammy Abraham could barely stand up, and it was the hobbling striker who was not only unable to prevent Hector Bellerin’s shot himself, but blocked his team-mates from doing the same.

Arsenal’s captain for the night rescues a point for the visitors with a stunning effort!

What a moment for him! pic.twitter.com/tGc190cqp2

Maybe Lampard privately slammed his players for not kicking the ball out to allow Abraham to get treatment, but his post-game comments are continually about his frustration at Chelsea not converting the chances they create, rather than their astounding inability to manage a game properly – a far more worrying trend.