Home F365 Features Do Huddersfield even have a chance of avoiding the drop? 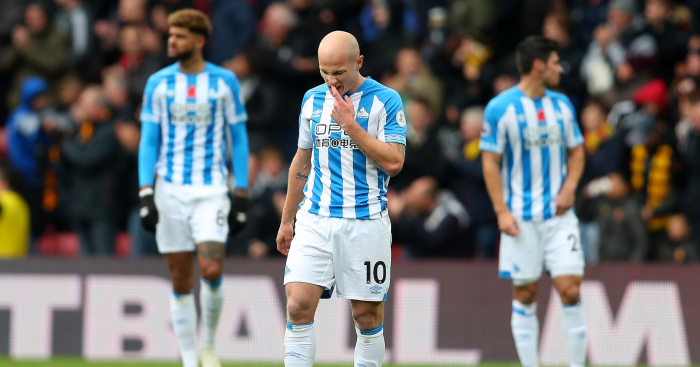 Right now things are looking pretty bleak for Huddersfield Town. Well, not exactly bleak, because they never expected to get to the Premier League in the first place, and already did themselves proud by surviving the first season. But you know what I mean. Only four goals in 10 matches, only one goal all season from open play – and even that was scored in the aftermath of a set-piece. Cardiff City and Fulham have worse defensive records, but that’s not much consolation. Relegation isn’t just beckoning, it’s dressing in a black cloak, holding a scythe and a flashing sign saying ‘YOU’RE NEXT’.

But there are still 28 matches left to play, so it’s not time for a post-mortem yet. Let’s look instead at where and how they’re struggling, what, if anything, has changed from last year, and whether they might not be as doomed as they look.

The first thing to note is that the Terriers were in clear relegation form starting with the seventh game of last season. During that period they notched only 28 points, which plots to 31.5 for a whole year. They stayed up because they put points in the bank early: nine in their first six games. So it’s not as if a hot streak can’t still make a big difference.

On the other hand, last year they never had a streak as bad as this. They never went a 10-game stretch with fewer than six points. So there’s plenty of ground to make up.

But a hot streak isn’t out of the question. So far their fixtures have been among the toughest in the league, including Chelsea, Manchester City, Tottenham, Liverpool, Everton, Leicester City and Watford. They’ve played only three sides in the lower part of the table: they got draws with Burnley and Cardiff City (down to ten men against the latter), and outplayed Crystal Palace but lost 0-1. The opposition is about to get easier, and well within their reach.

So if the Terriers start digging, points are there to be had. But if they’re going to win matches – and they’ll need wins, not draws – they’ll have to score some goals. Why is the attack failing, and can anything be done about it?

Last year Huddersfield’s system relied significantly on wing play to bolster the attack. Outside men would get the ball, run at defenders, and create what they could. Rajiv van la Parra, Elias Kachunga, and Collin Quaner may not be household names outside of West Yorkshire, but for a promoted side they posted some passable numbers. If you take their expected goals/90 and add their expected assists/90, you get 0.16, 0.16, and 0.28 respectively. In fact, Quaner’s four assists were Town’s best, ahead of Aaron Mooy‘s three.

Now go to this year’s stats, and you’ll see the wingers just aren’t producing. Van la Parra is at only 0.07, Kachunga 0.05, Adama Diakhaby 0.04, and Quaner hasn’t played at all. The best numbers belong to Isaac Mbenza, and even he’s only at 0.13, below last year’s top trio.

For whatever reason, David Wagner doesn’t fancy Quaner anymore. Despite his good stats, the club added Diakhaby, Mbenza and Ramadan Sobhi in the summer. Florent Hadergjonaj has even played farther forward at times. We don’t know how good Sobhi is, because he’s missed most of the season with a knee injury. Reports claim that he’s fit for this weekend. He showed some potential at Stoke City and might thrive in a winger-based system. Right now he and/or Mbenza look like the best options.

Then there’s the number 10 spot, where Alex Pritchard had his moments in the second half of last season. This year he started the first two matches (Chelsea and Man City), was dropped to the bench, regained his starting spot at the end of September, and has played almost every minute this past month. But he too isn’t producing like last year – not even close. Again adding xG/90 and xA/90, his open play numbers have absolutely plummeted from 0.23 to 0.07. But at the moment he’s the only option, with Mooy more comfortable slightly deeper.

As for Mooy, the wing problems have been so extreme that even he’s been tried in a wide role. It worked fairly well in a 4-2-3-1 against Burnley, then not at all in a 4-4-1-1 against Watford. Further experimentation is likely. Without boring you with the numbers this time, suffice to say Mooy’s not at the same level as last year either, although his drop has been moderate rather than severe.

With loss in production from both wings and the middle, you’d assume that the strikers, Laurent Depoitre and Steve Mounié, aren’t scoring because they aren’t getting chances. But if you combine their expected goals, you get almost the exact same level of performance as last season. The shots just aren’t going in at the same rate – in fact they’re not going in at all. Ten games in, neither man has scored yet. But since last year they combined for 13 goals, odds are the net will start bulging soon.

So that’s cause for optimism. And there’s a bit of good news on the set-piece front as well. Step forward Philip Billing, defensive midfielder. He’s had some good 90-minute performances, but where he really excels is in dead-ball situations. He has one goal himself, with a header off a corner. Not one but two other goals have been scored from – wait for it – Billing’s long throw-ins. Oh, and the Terriers’ one and only open-play goal came on a sequence following another long throw-in. You can’t have him, Tony!

Unfortunately, there’s more bad news to be had. While the meagre attack has received most of the attention, the defence has declined as well. They’ve conceded 21 goals in 10 matches, which works out to almost 80 goals for the season, compared to 58 last year. Expected goals suggests they’ve been a bit unlucky, but even allowing for xG they’d be on pace to allow around 10 more goals than last season.

Here, one stat stands out a mile: clearances. Last year, Huddersfield had 28.2 per match, sixth in the league. For a team that figures to defend a lot, that’s about right. Brighton, Newcastle and Bournemouth had similar numbers. But this year they have an astonishing 15.5, ranking 19th in the league. The teams with similar numbers are Manchester City, Liverpool, and Chelsea.

I said ‘astonishing’, and I’ll say it again. Astonishing. I’ve looked everywhere, and all the other connected stats are within range of last year’s. There’s nothing to explain this. It’s very simply a drastic drop in defensive efficiency. Christopher Schindler, the bulwark of the defence, sixth in the league in clearances/90 last year, now ranks 49th. Zanka has dropped from 16th to 75th. Yes, they’ve played in a three with Terence Kongolo sometimes, but that doesn’t come close to accounting for the drop. And again, the entire team is way, way down.

How to help? No clue. Kongolo is probably their most talented defender, either at left-back or centre-half, and played very well until he hurt his hamstring in late September. Word is he’ll be back to full fitness soon, but some of the team’s better performances have been without him in the line-up. There’s no clear pattern where he’s concerned.

If you’re wondering about Jonas Lössl at keeper, his shot-stopping isn’t terribly good, but it wasn’t that good last year either, and at least one rating system has him improving slightly. If you’re also wondering about the famed Terrier press, it’s posted numbers very similar to last season’s.

And so we find ourselves back at the beginning. Huddersfield are in last place. The fixtures will get easier for a while. The side have delivered decent performances against lower-level teams. The strikers should be due to find the net. Less margin for error than they’d have wished, but it’s doable.

We’ll close, then, with the most encouraging stat of all. As poorly as they’ve played, believe it or not, Huddersfield have the exact same number of points as from the equivalent fixtures last season. By that measure they’re not doing any worse at all. They’ve even picked up an extra point from their one new fixture, at home to Cardiff City. So they just need the same recipe as last year: some luck, some pluck. It all starts Monday evening home to Fulham.