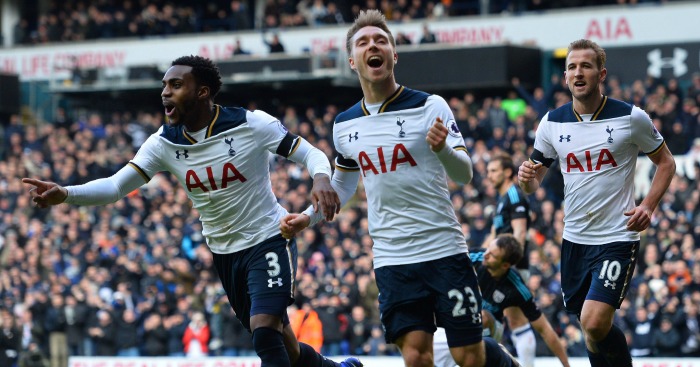 As usual, the words got muddled in a mist of hyperbole and loyalty, but the kernel of Harry Redknapp’s argument in the aftermath of Tottenham’s defeat to Chelsea in November contained an essence of truth, however laughable the headlines it inevitably created.

“I think when they have got a fully fit team, I would not be wanting to be swapping anyone in Chelsea’s best team for Tottenham’s,” said Redknapp and we all chortled at the idea that Eden Hazard, N’Golo Kante or Diego Costa would struggle to find a place in Tottenham’s starting XI. Too far, Harry, too far.

Closer to the truth were the words that followed: “In terms of squad, you would take Chelsea, but the actual starting eleven, I would not swap any of that Tottenham team personally.”

What we can all surely agree – as Tottenham celebrate a sixth consecutive Premier League win to move second in the table – is that there is compelling argument for saying that Spurs have a stronger starting XI than than the league leaders. This is not about Costa v Harry Kane or Hazard v Christian Eriksen, but Chelsea’s first-choice side v Tottenham’s, regardless of individual nuances.

Fully fit – as they are now, barring the increasingly mysterious absence of Erik Lamela – they are a more balanced, smooth and well-drilled side than any other in the Premier League. They simply work. It looks instinctive in a way that only really happens when there is no weak link. They do not have Liverpool’s soft centre, Manchester United’s questionable full-backs, Manchester City’s centre-halves, Chelsea’s Gary Cahill or any of Arsenal’s revolving weaknesses.

Both statistically and aesthetically, Tottenham have the finest defence, a balanced and combative midfield, enviable width from their full-backs, impudence and drive from Dele Alli, vision from Eriksen and the astonishing and instinctive finishing ability of Harry Kane. They were devastating and yet disciplined against West Brom on Saturday, just as they were in their previous five Premier League victories.

The only question marks, as ever, lie over the Tottenham bench, with not one player outside the starting XI making a case to usurp anybody on the pitch. ‘The team picks itself,’ is a double-edged sword. If the team picks itself, what happens when you have injuries and suspensions? Unfortunately, Vincent Janssen happens; Moussa Sissoko happens; Kevin Wimmer happens.

The inevitable consequence of having footballers whose class is beyond the natural status of the club is that it is almost impossible to buy anything other than substitutes. Prospective striker signings knew they would be playing back-up to Kane, potential midfielders looked at Mousa Dembele and wondered how they could budge him. And Tottenham do not offer the kind of wages that makes sitting on the bench an attractive prospect. They had Champions League status but had to buy Europa League players.

10 – The last 10 Premier League goals scored by Tottenham players have been netted by Harry Kane or Dele Alli (5 each). Core.

There is a lot of nonsense written about over-reliance on certain players, as if clubs and managers should not get credit for creating a successful team with outstanding individuals, but it’s difficult to see Tottenham winning this particular Premier League title – where the margin for error is so tiny – when the gap in quality between starting XI and bench is so cavernous.

But on the day when they moved into second place with their sixth consecutive victory, the focus should be on a startlingly good Tottenham team – finally over the despair of last season – who are busy proving Harry Redknapp at least half right.