Home Mediawatch Do The Sun treat Emiliano Sala with respect? Do they f*** 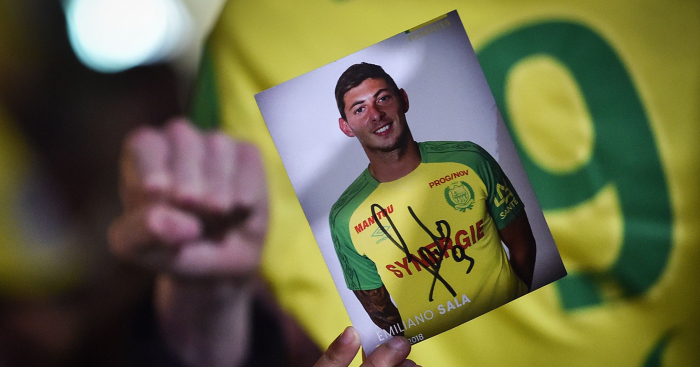 ‘As football fans come to terms with the possible death of Cardiff City striker Emiliano Sala, we look at other air disasters that have affected the sport.’

It is at that stage that Sky News should have taken a deep breath and a step back and wondered quite why they felt compelled to do such a thing. ‘Manchester United to Chapecoense: Football’s air disasters’ is a headline that should never be committed to print.

Both the article and the accompanying tweet have since been deleted, but let it serve as a reminder that not everything has to be diluted to list format. If you have nothing of use to add to such a devastating story, just don’t.

Questionable headline of the day
‘It was hoped he would be the striker to shoot Cardiff to safety. Then he boarded the plane’ – Daily Mail.

They have mercifully since changed it on the MailOnline website, and with good reason.

#DontBuyTheSunUnlessYouAreWritingMediawatch
At least that was simply an innocuous lapse of judgement, and in no way malicious. The Sun can have no such excuse. Here is their headline:

Because fueling speculation by quoting the spurious claims of someone who will have been affected deeply by such a terrible event is helpful.

But still, you got the word ‘model’ in the headline, along with six pictures of Berenice Schkair (there are three of Sala) – five of which are of her alone (in her underwear, because The Sun) and are taken directly from her Instagram.

He forecasts yet more doom for Burton in a 4-0 defeat to Manchester City, before turning his attention to Tottenham’s game with Chelsea. He says:

‘Tactically with Chelsea, I don’t think there’s a plan. Maurizio Sarri plays the same way every week, and over the last few weeks they’ve struggled to break teams down. They’re not making 10-15 chances a game, and it’s going to be difficult. It’ll be a hard game.’

So hard that they are predicted to win 2-0. Great stuff.

Much of that is due to Tottenham’s injury crisis, of course. Merson states that ‘it’s a good time to play’ them.

‘If you could say before the game that you can pull out three players from that team, then it would be Harry Kane, Dele Alli and Heung-Min Son, along with Christian Eriksen.’

You’re looking for a little more consistency
Merson is also one of the usual coterie of Sky Sports pundits asked to predict the Premier League’s top four come May. And the Chelsea fan rather surprisingly reckons Chelsea will make it.

After ruling out Manchester United on the basis that they ‘will get found out’ as ‘they can’t keep on being that lucky’, Merson explains why his former club will fail to make up a three-point gap on a team they have just beaten with 15 games remaining.

‘It would’ve done Arsenal a favour to get beat the other day, I think, and then they could have put all their eggs into the Europa League,’ says the Magic Man. Again, Arsenal are literally one win behind fourth place with 39.4% of their games left to play.

‘Now they’ve got to go for the league too but I just don’t think they’re good enough. They’re hot and cold, you’ve got to be consistent. One minute they’re getting well-beaten by West Ham, but then they’re well-beating Chelsea. The manager’s got to be scratching his head.’

They did seem pretty ‘consistent’ when winning seven straight Premier League games from August to October – only Liverpool (nine) have been on a longer run this season. And it would be difficult not to be ‘consistent’ during a 22-game unbeaten run.

Oh, and they have been ‘consistent’ enough to lose fewer Premier League games than Tottenham this season. But carry on.

‘This is Arsenal, they need to be playing Champions League football, not Thursday night.’

Which is probably why they didn’t pack in their season with over a third of the games remaining, considering they are three points off ‘playing Champions League football’ pace.

‘Kevin-Prince Boateng made his shock arrival at Barcelona yesterday – but hardly anyone turned up for his welcome.

‘The ex-Tottenham forward is at the Nou Camp on an initial loan deal from Italians Sassuolo.

‘It was a far cry from when Thierry Henry went to Barca from Arsenal in 2007.’

This just in: The Sun thinks loaning a back-up striker for four months is the same as signing a former Ballon d’Or runner-up and world champion for £16.1m.

Load of (paint)balls
‘Mesut Ozil cannot get in Unai Emery’s Arsenal team – even at PAINTBALL’ – The Sun.

‘Mesut Ozil has been out of favour with the Arsenal head coach Unai Emery but the two were rubbing shoulders yesterday during a paintballing trip’ – The Times.

Two opening paragraphs, both prompted by the same picture. And in their haste to not sensationalise everything, The Times have rather naively forgotten that this was a PAINTBALLING trip. Embarrassed for them.

Lesson the impact
The Daily Mirror website learned five things – only five – from that picture of the Arsenal squad and staff at a team-building exercise. Of course they did.

First is that some players ‘decided to show off their colours’ by holding their nation’s flag. We remain confused as to what the lesson is here.

Second is that Mesut Ozil wore a hat that might have been related to Turkey, according to ‘some fans on social media’. Again, what is it that we have learned?

Third is that Laurent Koscielny is ‘feeling a little confident’ because he struck a pose, while the fourth lesson is that Shkodran Mustafi looked ‘menacing’.

The final thing we learned from this photo? That Aaron Ramsey ‘wasn’t taking any chances and in a bid to ensure the Arsenal stars didn’t turn on him made sure his helmet was secure’.

Recommended reading of the day
Stuart James on Emiliano Sala.