Home Mediawatch Does Eden Hazard still ‘sum up what is wrong at Chelsea’? 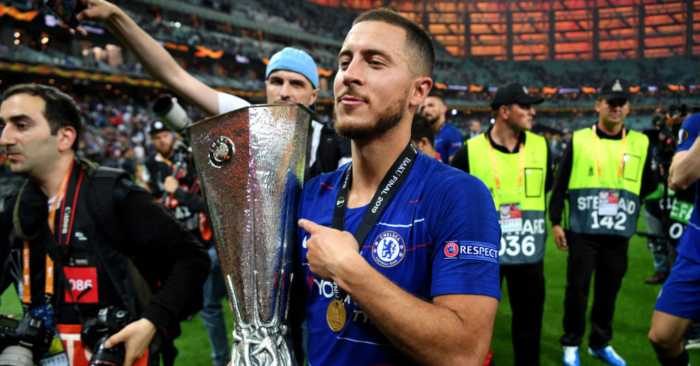 Is it too late now to say Sarri?
Question: How many paragraphs does it take West Ham fan Andrew Dillon to mention Maurizio Sarri – peculiarly not described as a ‘former merchant banker’ on this occasion – in his Europa League final report for The Sun?

Question: Who is named in said report before the winning manager?

Question: How annoyed are The Sun that this ‘wild, floundering’ fella (Neil Ashton), ‘obsessed with chalkboards and Marlboro Lights’ (Dave Kidd), has just won a major European trophy in his first season at a new club in a new country with a single permanent new outfield signing, all while being hounded by the media and sections of the support?

Let’s get serious
You can almost taste the bitterness in Neil Ashton’s report, for example:

‘Despite all those boardroom battles, dressing room fall-outs and fans screaming for Sarri-ball to be booted into touch, this lot still know how to win silverware.’

So it’s all down to ‘this lot’, the players?

‘Chelsea’s manager, lifting the first serious medal of his chaotic career, is a winner at last.’

Let’s ignore the various promotions and individual honours. And those in the back shouting about how this was only his fifth season of top-flight management, the first of which came with newly-promoted Empoli, with the other three spent trying to break one of Europe’s biggest monopolies at Napoli, can be quiet. This chancer, ‘a winner at last’, has finally won a ‘serious medal’.

Indeed. All that’s left is for the tiny details, such as Chelsea and Real Madrid agreeing an actual transfer fee, to be decided.

As Hazard himself said: “I think it’s a goodbye, but in football you never know…Now it depends on the club, both clubs.”

He really has “as good as left”.

Olivier!
Mokbel’s Mail colleague Martin Samuel agrees that Hazard is ‘almost certainly’ bound for Madrid. ‘He was Chelsea’s best player’ in the final, according to the chief sports writer.

Which is weird, because he was given an 8/10 to Olivier Giroud’s 9/10 in the player ratings on the adjacent page.

‘Olivier Giroud couldn’t get a game for Arsenal towards the end of his time there,’ he tells the Daily Mail with more than a hint of consternation.

He had a hamstring injury, to be fair.

Tone it down
Tony Cascarino was in charge of compiling ratings for The Times, and duly offered up two sublime pieces of punditry.

First, his thoughts on Hazard:

‘Surely his farewell. For me, the club’s best ever. Lovely pass for Pedro’s strike, impish penalty, great goal.’

Chelsea’s ‘best ever’ player is a huge shout, but purely subjective. So that’s fair enough. And it was a great pass for Pedro’s goal to go with his own fine finish.

But that ‘impish penalty’ line has set an alarm off in the deep recesses of Mediawatch’s mind.

Perhaps it is this column from a certain someone on February 26:

‘There is a complete lack of leadership at Chelsea, from the top down. There are no leaders in the boardroom, no leaders in the dugout and certainly no leaders on the pitch. Nobody seems to have a clue what is going on and Kepa Arrizabalaga’s refusal to be substituted at Wembley typified that.

‘Eden Hazard is by no means captain material but he should be one of the senior players leading by example. Instead he was taking the mickey with his Panenka penalty in the shoot-out against Manchester City. It was bordering on ridiculous. There should have been someone in the dressing room after that saying, “What the f*** are you doing?”

‘Would he do that in a World Cup final? No chance. He was not taking it seriously and it was completely unprofessional. It summed up what is wrong at Chelsea. Players such as Hazard and Arrizabalaga are pushing boundaries because they know they can get away with it – and Maurizio Sarri’s uncertain future as head coach adds to their complacency.’

From ‘by no means captain material’, ‘taking the mickey’, ‘bordering on ridiculous’, ‘completely unprofessional’ and a sign of ‘what is wrong at Chelsea’ to their ‘best ever’ player in the space of 93 days and two converted penalties. Funny, that.

Part of Cascarino’s problem in that ridiculous piece three months ago was the cheek of Hazard to be a foreign man. ‘It really helps for your captain to be born in the same country and have a strong connection to the club,’ the pundit wrote, which must make it awfully confusing that four of the last eight Premier League titles have been won by a Belgian skipper.

It also goes some way to explaining how Cascarino rated Ainsley Maitland-Niles – the only English starter for either side – as a 7/10.

Arsenal’s joint-best player, who only Hazard (9) and Giroud (8) were better than on the night, was at fault for three of Chelsea’s four goals. But he was born in the same country and has a strong connection to the club, so it matters not that he ‘faded badly’.

For clarity, Maitland-Niles was rated as Arsenal’s joint-worst player by the Daily Mail and The Sun. Perhaps they didn’t check his birthplace first.

Robbie Savage: “Couldn’t Giroud throw his head at that?”

No Robbie, probs not. pic.twitter.com/MX7mzvCq4n

Cech, mate
‘It is no wonder Petr Cech has decided to call time on his career… why would he put himself in front of such a torrid Arsenal defence for another season?’ – MailOnline.

No wonder they conceded four times if their keeper was in front of the bloody defence.

Recommended reading of the day
Jonathan Wilson on Maurizio Sarri.