Home Home Page Front Page Does Messi need the World Cup to be great? Does he balls. 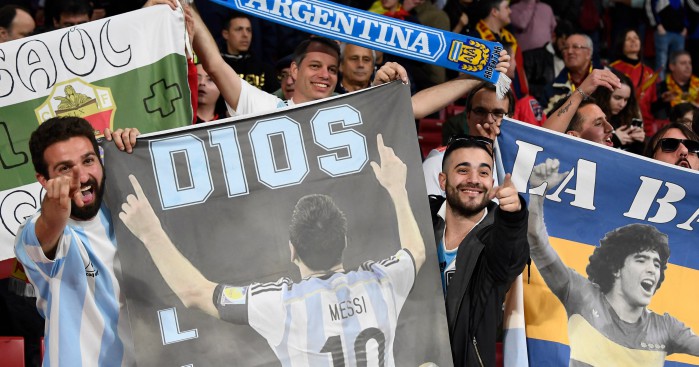 In the build-up to Spain’s friendly with Argentina on Tuesday night, all the talk in the Spanish press was about one Lionel Messi.

The Barcelona forward missed Friday’s match against Italy at the Etihad to avoid aggravating a hamstring strain, lest it preclude him from playing for his homeland against his country of residence at the Wanda Metropolitano.

In the end, despite all the hype, he wasn’t fit enough to play anyway. Spain will be disappointed not to have the chance to challenge themselves against Messi, as they deliberately chose their opponents to provide as stern a test as possible ahead of the World Cup. As it turned out, a Messi-less Argentina offered almost no resistance and were ruthlessly demolished 6-1 by an Isco-inspired Spain.

The shambolic manner of defeat aside, Messi’s absence was surely a disappointment for the sizeable Argentinian support in Madrid, who were excited to see their hero in action. For obvious reasons, he is extremely popular in his home country, but for many he is still yet to emerge from the extremely long shadow cast by a very small man.

Diego Maradona is revered as a deity in Argentina. Messi matches up to the great man in terms of ability, and far surpasses him in terms of goalscoring statistics and honours at club level, but there are two key areas where he falls short.

One is charisma. Maradona is held is such high regard in Argentina as much for his personality as for his footballing achievements. Messi is quieter by nature, and as such isn’t as naturally endearing to the fans in his homeland. According to the great former Albiceleste striker Gabriel Batistuta, Messi can’t be considered as great as Maradona because the latter “represents an Argentinian in many things, not just in football. He has a charisma. He has rare talent and fantasy”.

But even when comparing their respective footballing achievements, many feel Messi cannot join Maradona in the footballing pantheon until he has won the World Cup. It is as if winning the World Cup is the only benchmark by which true greatness can be measured, and is probably the reason why Maradona and Pele, who both won international football’s biggest prize, are generally considered greater than the likes of Johan Cruyff and George Best, who never did.

This is, clearly, absurd. By this logic, does this mean that Stéphane Guivarc’h, Kléberson and Shkodran Mustafi are more worthy of legendary status because they got their mitts on the World Cup?

It could be argued that the fact that Messi has consistently performed at such a phenomenally high level for such a long time in an era of 24/7 coverage makes his achievements even greater than those of Maradona and Pele. Without wishing to cast shade on the obvious genius of those two men, a certain amount of their beatification owes to the fact that their exploits were rarely televised, and as such they could only be seen by the masses during the World Cup or major domestic or continental fixtures.

The fact that Messi maintains a mystique of his own in spite of constant exposure and over-familiarity is testament to his brilliance.

The pressure from the press and the Argentinian public on Messi will be extremely intense as the World Cup approaches. In this international break, both Messi and his international manager Jorge Sampaoli have been quizzed about it, with Messi acknowledging that this summer may be his last chance to add international glory to his extensive club-level success. Based on Argentina’s recent form, it doesn’t look likely to happen. They only just qualified for this summer’s tournament, courtesy of a Messi hat-trick against Ecuador in the final qualifier. They may have to rely on more performances like that from their main man to have any hope of victory in Russia.

No pressure, Leo. Sampaoli inadvertently added to Messi’s burden in his press conference on Tuesday, saying: “He has a gun to his head. The pressure is on him as he knows that if he doesn’t win it, he will receive a lot of critics.” Messi may not thank his boss for adding yet another bullet to that gun.

It’s not the first time Sampaoli has spoken of Messi’s lack of World Cup success, saying after that game against Ecuador that “football owes Messi a World Cup”. It is understandable to want Messi to win the World Cup to crown his magnificent career, much in the same way that many want Gianluigi Buffon to add the missing Champions League title to their collection. But should he never win it, it doesn’t follow that he should forever have an asterisk after his name when the greatest ever players are discussed.

Once he has retired, will we look back on Messi’s glittering career, discuss all his achievements and his majestic talent, but still finish by saying ‘but he never won the World Cup’? If we do, we’d all be guilty of focusing on the tiniest brushmark in an otherwise magnificent tableau.