Home All The News Donnarumma speaks out ‘psychological violence’ banner 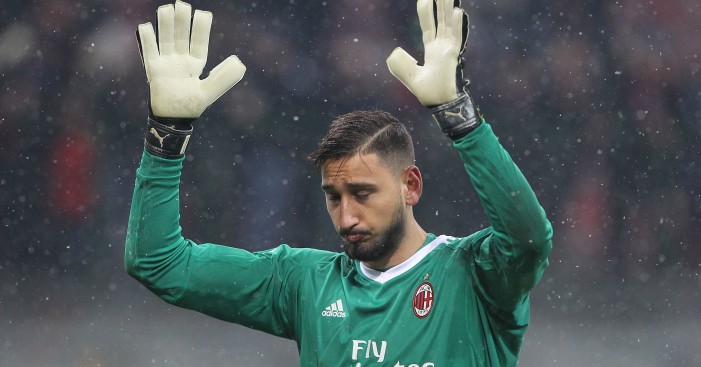 Gianluigi Donnarumma has taken to Instagram to respond to criticism from AC Milan fans who this week unfurled a huge banner at the San Siro teklling him: “It’s time to leave.”

The teenage goalkeeper, who has been identified as Gianluigi Buffon’s successor in the Italy national team, has come under fire after more doubts were raised over his future and reports claimed he felt ‘psychologically pressured’ into signing a new contract with the club in the summer, according to Corriere dello Sport.

Donnarumma penned a new deal a year before his previous terms expired, with the 18-year-old said to have become the third-highest-earning keeper in the world. At the same time, Milan also signed Donnarumma’s brother, Antonio, a 27-year-old former Milan youth keeper who left the San Siro for Genoa in 2012 before making just one Serie A appearance in four years. He was brought in from  He spent one season with Asteras in Greece.

"Psychological violence by giving you €6 million a season & signing your parasite brother? It's time to leave…our patience with you is over!"

Milan fans showing their anger towards Donnarumma after all the reports that he's trying to leave them… pic.twitter.com/gNEql2iqk5

With their No.1 keeper and his agent, Mino Raiola, supposedly now trying to wriggle out of the terms they committed to, Milan fans vented their fury during the midweek Coppa Italia victory over Verona by unfurling a huge banner which read: “Psychological violence by giving you €6million-a-season & signing your parasite brother? It’s time to leave… our patience with you is over!”

A distraught Donnarumma was seen in tears on the pitch and in the dressing room, where he was consoled by Leonardo Bonucci. On Thursday, he responded on Instagram.

“It was a bad evening, one I did not expect.

“I have never said or written that I suffered moral violence when I signed the contract.

“Despite everything, I look forward with my head focused on the next game. Forza Milan!”

Like many of his Milan team-mates, Donnarumma has had a poor standard by the standards he has already set. Milan sit in seventh place in Serie A despite a summer spending spree that led to expectations of a title challenge.

Donnarumma has appeared distracted by off-the-field events, despite supposedly settling his immediate future during the summer. He signed a new contract after initially suggesting he would not do so, upon which he was showered with fake bank notes during Italy’s European Under-21 Championship clash with Czech Republic in Poland.

His unhappiness, and that of super agent Raiola, apparently stems in part from Milan’s reported failure to file a release clause with his new contract, which is said to be worth £61.4million if the Rossoneri are in the Champions League and £35.1million if they are not.