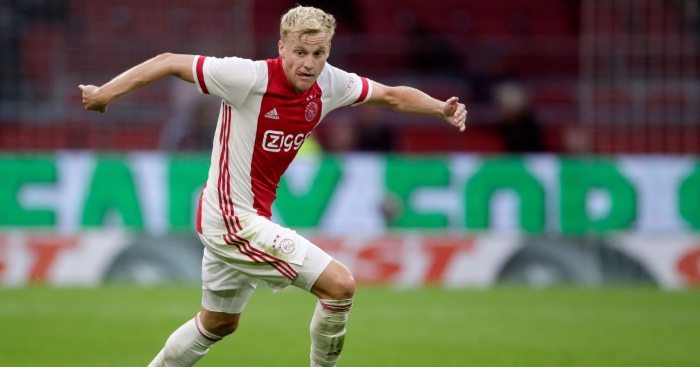 The Dutchman has been strongly linked with a move to Old Trafford this summer as Ole Gunnar Solskjaer tries to improve his squad.

It was reported on Saturday that the player was holding out for a move to Barcelona and had told his agent to prioritise a dream move to the Nou Camp.

FEATURE: Ponder replays: The end of an outmoded relic?

But according to Spanish source Diario Sport (via Mirror), van de Beek has now told his teammates at Ajax that a move to United is imminent.

They claim that the player is preparing to move to Manchester and will join the club in the coming weeks.

He was even left out of Ajax’s most recent squad over developments surrounding his future.

A potential deal is expected to cost United around £40 million, although this could rise to £50 million with add-ons.

Van de Beek’s arrival may signal the end of Fred’s career at the club. The Brazilian has been linked with a move to Turkey and will surely see his playing time reduced if the club signs another midfielder.

Van de Beek’s creativity may see him form a strong partnership with existing midfielders Paul Pogba, Scott McTominay and Bruno Fernandes. The signing would give Solskjaer increased depth in that position and a better chance at pushing for the title.

The signing looks set to become the club’s first of the summer. They’ve been linked with a long list of players, but have yet to bring anyone to Old Trafford.

Jadon Sancho has been one of the biggest stories of the transfer window but it now looks like he will remain at Dortmund for the 2020/21 campaign.

If they fail in their pursuit of Sancho then they may prioritise Jack Grealish from Aston Villa. The Englishman has been valued at around £80 million.