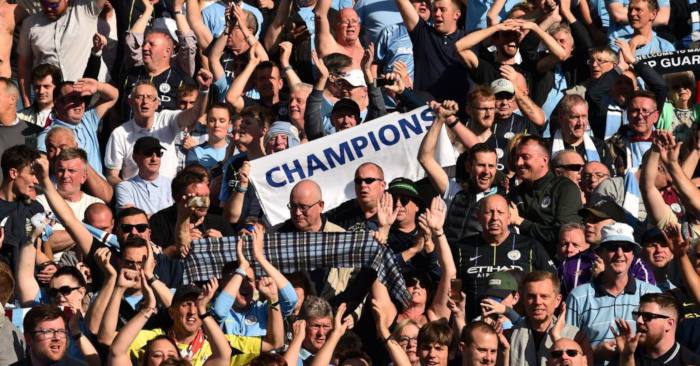 It’s exhausting being a Manchester City fan in 2019. It’s a cocktail of one part great football, one part title-race stress, and one part being wilfully complicit in human rights abuses, financial irregularities and immoral behaviour. There’s barely any time for anything else in the day when you’ve factored in going to work, eating meals and sleeping.

Before we go on, since I know several readers have already scrolled past the rest of this piece and clicked into the comment box to explain how disrespectful or how misjudged this column is (and also probably how much of a **** I am), then let’s get a couple of things straight. Nothing in this column seeks to exonerate Manchester City of any wrong-doing should any allegations of any wrong-doing prove to be true beyond reasonable doubt. Nor does it intend to promote the sort of whataboutery that comes with being a football fan in a world of social media and hot takes. It’s not a competition.

All this intends to do is make you – and me – look at the moral ambiguity surrounding following a football team. I’m writing this outside my place of work, on my phone, in my car and it’s starting life as a stream of consciousness that I’m honestly not sure where it’s going to end up by the time you get to my name and link to my social profiles.

It starts, I think, with two pretty reasonable requests. The first is for Manchester City fans to stop feeling like they have to defend the club at all opportunities: They are big enough to defend themselves when they see fit and it is not on you to make excuses for them.

The second is for rival fans to stop asking Manchester City fans to defend their club, in light of allegations of human rights abuses in Abu Dhabi and financial misconduct in the eyes of UEFA. Financial misconduct here means receiving investment from an owner, a type of misconduct that is not misconduct in any other line of business outside of the hastily-introduced guidelines from UEFA.

Of course, rules are rules – and if you begrudgingly choose to accept those rules, you cannot just ignore them if you feel they are too harsh or even if you feel they are targeted at you. You’ve accepted them, so you live with them. But it’s still worth pointing out that there’s very little that is solely immoral about having a rich owner – and let’s not forget that, last week, UEFA were everything that was wrong with the game when a leaked document showed Champions League reforms that sought to protect the financial interests of the elite.

Some would argue that enjoying the result of Sheikh Mansour’s investment into City is to support Sheikh Mansour and the Abu Dhabi regime itself – but, of course, that’s a very black-and-white view of what is a very grey area. On the most basic level: City fans were City fans before his ownership and the idea that a deep-rooted emotional attachment can just be switched off at the tap because of something that is out of their control is naive at best and intentionally antagonistic at worst. Only a tiny minority at any club that would turn their back based on who has just bought it.

Here, many may throw in the example of the Glazers at Manchester United – but it doesn’t quite line up. “Green and gold until we’re sold,” has died a death, with crowds at Old Trafford only more recently showing discontent since there’s been a downturn in on-the-pitch fortunes. There was a minor defection to FC United of Manchester, but has anybody in actually Stretford noticed?

It was also basically a defection over the amount of debt that the Glazers intended to pile onto the club following their takeover. Find me a United fan who truly cares about how the owners later financed some of Donald Trump’s presidential campaign. Or a Chelsea fan who cares about Roman Abramovich’s past. Or a Liverpool fan who cares about a main sponsor hiding billions in deals with Iran when Iran was under sanctions.

The key, though, is that none of them should have to care. Trump may be an elected head of state, but he was elected on a campaign built on racist rhetoric – not that that should at all reflect on United’s fans, because it doesn’t. And Chelsea and Liverpool fans should not feel the glare of Abramovich’s investments or Standard Chartered’s sponsorship either.

This isn’t to say that City should be ignored because others are ignored – as I said earlier, it’s no place for whataboutery. It’s simply an illustration that, on a base level, fans are all the same: Irrationally in love with their team and believing they – and only they – are the best, often with very little foundation.

🎙️CHAMPIONS PODCAST:
Season 10, Episode 44
"The Best Man and the Binoculars"

Supporters shouldn’t have to pretend that there is more to following a team than that irrationally good or bad feeling they get when they win or lose, and neither should they be asked to defend it as more than that. If that sounds morally murky, then welcome to modern football: it’s in the game from the top to the bottom.

Dig hard enough and everything you like will be morally questionable. Your Amazon order or your Starbucks coffee are the easy starting points.

Equally, I would never criticise a City fan for turning their back on the club because of Sheikh Mansour’s ownership because it’s a big decision to make. Anyone who doesn’t or wouldn’t – or, to put it another way, the incredibly vast majority of all football fans – is not defined by that decision 24/7 for the rest of their lives and they have no case to answer.

But the critics have to be consistent, too. It’s notable how many opposition fans only seem to care about alleged human rights abuses when City have been good on the pitch or have lifted a trophy. It was remarkably quiet when Manuel Pellegrini was limping to a fourth-place finish in 2016, while it’s remarkably noisy now that Pep Guardiola has had back-to-back record-breaking seasons. If your only motivation in caring about human rights is to cast aspersions on others in their support of a football team, then it puts you just as much in the spotlight.

If you want to attack a football club for their ownership, finances, or anything that is beyond fans’ control, then go for it and ask them the questions. Don’t expect the fans to have to come up with the answers. It’s not on them to shill for billionaires, it’s on the billionaires to shill for themselves. And it’s on supporters to behave themselves as they watch the team and enjoy/endure the success/pain that comes with it all.

Because God there’s little to enjoy in life as it is.

David Mooney is the creator and host of the Blue Moon Podcast, an hour of Manchester City radio released every Friday.