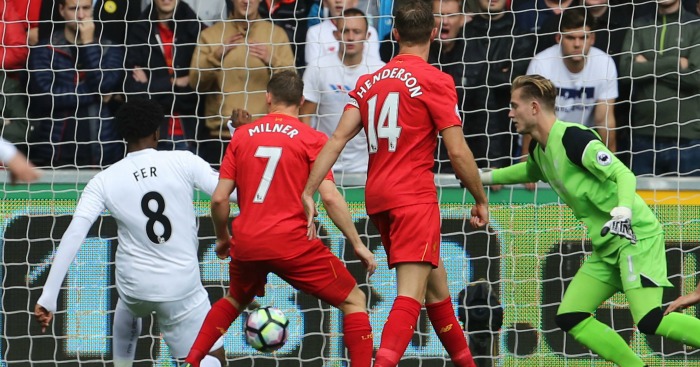 It was after an error-filled, goal-fuelled 4-3 win over Swansea in February 2014 that I wrote that this Liverpool side had showed exactly why a) people wanted them to win the title and b) they absolutely would not. After a 2-1 win against the same opposition, it’s tempting to write the same again. There were fewer goals but there was the same defensive vulnerability coupled with the same irresistible attacking verve. It was 2-1 but could have been 4-3. It was 45 minutes of ineptitude followed by 45 minutes of fortitude.

Pick your statistic. Take 1) Since Jurgen Klopp’s arrival, only Swansea have conceded more set-piece goals or 2) Since Jurgen Klopp’s arrival, no club has won more Premier League games from a losing position. Vulnerable and yet resilient. Flawed and yet irrepressible. Not the traditional components of a title challenge but definitely the key components for entertainment.

After their 1-1 draw with Tottenham earlier this season, our 16 Conclusions angered Liverpool fans because they contained lines like ‘they press high, they play with pace, they can be thrilling, they almost always look really bloody vulnerable at the back’, whilst arguing that this was not a side that could realistically compete for the title. At 1-1 against Swansea, when it looked very much like the Welsh side had survived the swarm of the second half’s opening 20 minutes, those words came back again. And they would have been equally relevant had Mike van der Hoorn not missed a sitter in the dying seconds.

Should we ignore that missed chance in the midst of the ‘great teams win games when they’re playing badly’ rhetoric? Should we ignore the set-piece wobbling when 2-1 away wins from being a goal down are the ‘stuff of champions’? Should we ignore a woeful first half with no shots on target when victory takes Liverpool second for at least a day?

More impressive result than Hull last week that, playing poorly 1 down at ht so a great turnaround & performance 2nd half. #SWALIV

The answer is that we shouldn’t because Jurgen Klopp absolutely won’t. James Milner said the German was “angry” at half-time and after the joy of victory dissipates, he will look again and again at the video, get angry again and demand a very different Reds performance in 16 days’ time. This was not the domination but ultimate frustration of losing at Burnley, but easily the worst half of football we have seen from them this season. If it weren’t for the woeful heading ability of Swansea’s £15.5m striker, Liverpool would have been destroyed by half-time.

“I was very angry at half-time. I am 49, I’ve lost a lot of games. But today made no sense. We could have been so much better,” said Klopp, who could have flipped his “football from hell” comment – made in the wake of a phenomenal performance at Stamford Bridge – on its head. This was hellish football and not in a good way. They were sluggish, insipid and wasteful while Swansea were energetic and effervescent. Francesco Guidolin may harshly lose his job, but other teams have gained a blueprint of how to hurt this Liverpool side.

Credit of course is due for the recovery. Compare and contrast with Manchester United, who came out after a dismal first half against Zorya and played equally as badly after Jose Mourinho’s team talk. Liverpool had clearly had a rocket up their bottoms and in the first 20 minutes of the second half, they had seven attempts to Swansea’s none. Here, at last, was the Liverpool side that didn’t give Curtis Davies a chance to breathe. In the end, victory was just about deserved.

Liverpool have scored more away Premier League goals than any other side in 2016; they have not kept a clean sheet away from home since February. How far Klopp’s side can go this season depends almost entirely on which of those statistics changes and in which direction. We could have just watched the champions; but we might equally have just watched the side who will finish sixth.