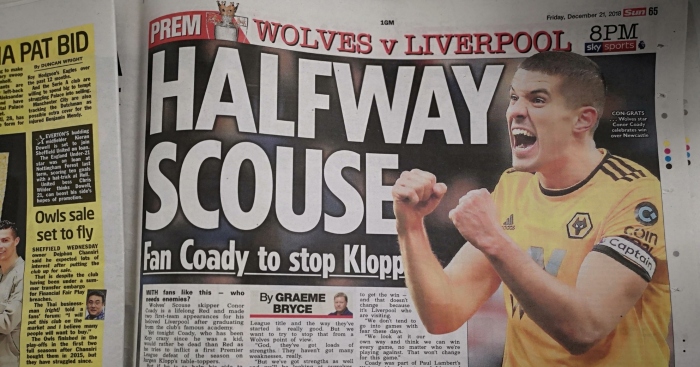 You are shitting us.

And how the hell did you get that out of him? Chinese burns?

Pesky fact: It is literally the smallest pitch in the Premier League.

Do the math
And here’s Paul Merson on Manchester United: ‘They played in their biggest game of the season last weekend and were steamrollered. It was embarrassing. Liverpool won’t have 36 shots against Huddersfield and Cardiff at home combined. It’s player power, simple as that.’

Well, Liverpool have already had 19 shots at home to Cardiff this season so they probably will.

Not only did he quote the wrong win percentage for Mauricio Pochettino in an effort to make Jose Mourinho’s Manchester United career appear a success, he also entirely neglected to offer any context; using his logic, David Moyes was a better United manager than Sir Matt Busby. Which we actually would not be surprised to find among his core beliefs.

Undeterred, Custis was back again…re-tweeting this gem which tried to illustrate that Jurgen Klopp has actually been something of a failure in comparison with Mourinho. Yes, the same Jurgen Klopp that is top of the Premier League…

Okay now this is mad;

Now that is indeed mad. Because Klopp’s actual win percentage at Liverpool is 54.7%. Another ‘carter record’ mistake, we presume.

Granted, that is still less than Mourinho’s 58% at United, but we cannot help but think that the Premier League numbers might be the better illustrator here. And Mourinho’s win percentage in the top flight is 53.7% while Klopp’s is 56.9%.

Also, there’s the small matter of Klopp taking over a team in tenth and being unable to initially spend any money on that side, which explains that first eighth-placed finish.

And then there’s the cheek of counting the Community Shield among Mourinho’s trophies.

Oh and then there’s the fact that Liverpool have recouped around £290m in transfer fees under Klopp in comparison to Mourinho selling players for around £85m.

And now we’re boring the sh*t out of ourselves so we will just wait for Monday and the latest ‘mad’ fact that actually Pep Guardiola has been really shit at Manchester City in comparison with the really quite brilliant Mourinho.

In the line of duty
Mauricio Pochettino held a Tottenham press conference on Thursday. It was both shortly after the club had beaten Arsenal in a League Cup quarter-final, and shortly before they travel to Everton hoping to keep the pace towards the top of the Premier League table.

So what was Pochettino asked about? Manchester United. Like he was in his pre-match press conference on Tuesday. And his post-match interview on Wednesday. And just as he probably will every week until United appoint a permanent manager. It is tiresome, not only for Pochettino and Tottenham, but for everyone else. There is only so much he can say on the subject, particularly considering he had discussed it twice already this week.

But Sky Sports did not let that stop them. “It can’t have escaped your attention that there is a lot of talk about yourself and Manchester United,” said reporter Dharmesh Sheth, oblivious to the fact that most of that talk has been media-led.

Sheth was (un)fortunately unable to actually ask his question due to the intervention of Tottenham’s press officer, who quite rightly points out that “48 hours ago, we had the same conversations” that “the manager’s answered” and “I’m not prepared to have another press conference dominated by it”.

Then came the protestations. After being blocked from asking the question, Sheth says that “with respect, everybody is talking about this, everybody’s talking about it”. Which everybody is – largely because the media keep shoving the idea of Pochettino to United down our collective throats.

After being asked to move on, Sheth complains that “it works both ways”, before attempting to plough on once more with his question. He is stopped again (obviously), but does not back down.

“What I’m saying is this is going to carry on for months. We’ve been talking about plenty else. I don’t understand – there’s a question that needs to be…”

Before Sheth can finish, he is interrupted as the press officer, frustrated at trying to converse with a brick wall, asks the cameras to be turned off. But Sheth’s claim that any question “needs to be” answered is astounding, particularly as a) it already has been, b) it will be again countless times before the end of the season, and c) that is a delightful level of self-importance.

To ram that third point home, what headline did Sky Sports use for this story?

What was that thing about how journalists should never become the story again?

Been caught out
Anybody want to play a game of Spot the Difference? Mediawatch admits it is struggling to spot too many differences between an article on the Training Ground Guru website and this from John Cross on the Daily Mirror, which was labelled an exclusive.

Certainly Simon Austin, the writer of the original piece, could not spot too many differences. Which is why he called the Mirror offices and publicly called them out on Twitter…

Why is this marked as your exclusive when it’s a straight lift of my piece from 24 hours ago @johncrossmirror ?? https://t.co/zv1xgPnnYr https://t.co/5RNzaefCVy

Their response? They deleted the tweet, removed the word ‘exclusive’ from the piece and gave his website a link way down in the eighth paragraph of a story that remains pretty much a carbon copy of his original.

Obviously an actual public apology would have been absolutely ludicrous.

Red mist
What’s worse? Stealing somebody’s piece of content, or claiming to have interviewed a man who has categorically refused to be interviewed by your newspaper?

Many of these quotes in the @TheSun are ripped from the interview I did with Conor Coady this week, with no credit given. https://t.co/wfMFgqZtlf

#DontBuyTheSunUnlessYouAreWritingMediawatch
Woah there. Have The Sun really used the line that Coady ‘would rather be dead than Red’?

Yes. Yes, they have. And that really is The Truth.

A Xmas tale
Over on The Sun website, Andew Dillon is writing poetically about Ruben Loftus-Cheek. ‘This stylish young Englishman is the size of a heavyweight boxer, but carries himself across the pitch like an ice-dancer,’ apparently.

Now Mediawatch could linger on Dillon citing Loftus-Cheek’s record of creating 1.8 chances per match (well, per 90, actually, but we know tabloid folk struggle with stats) as a reason to give him an extended run in the side before writing that ‘the obvious place would be on the right side of his forward three, using his skill and strength complement Eden Hazard’s dribbling skills on the opposite flank. But then what do you do about Willian with his speed and endurance and free kick skills?’

And indeed, what do you do about the fact that Willian actually creates 3.5 chances per game, which is rather a lot more than 1.8?

Or we could simply point out that Chelsea are doing rather well without Loftus-Cheek. For example, they beat Manchester City 2-0 just two weeks ago. And the last Premier League game Loftus-Cheek started was a 2-1 defeat to Wolves.

‘The one place he could play which hasn’t been mentioned is up front although Loftus-Cheek himself admits he has never seen himself as a striker.

‘But with Giroud struggling and Morata more so it may be the only place where Sarri could find room for his wonderkid – a common problem at Christmas.’

We think he is comparing Ruben Loftus-Cheek to Jesus Christ.

And we think he is calling Jesus Christ a wonderkid.

We have hit peak tabloid.

Cynical headline of the year
You may remember – though it has been oddly forgotten by the media – that Cristiano Ronaldo has been accused of rape. Which in no way influences this headline from the Daily Mirror website, of course…

The Mirror absolutely know what they are doing.

And you know what else they know? That Ronaldo’s sentence for tax evasion will never be served. But don’t let that get in the way of a click-tastic headline, fellas…

Insight of the day
‘Bournemouth have not been playing badly but they have lost seven out of their past eight games’ – Mark Lawrenson, BBC.

Let’s hope they don’t hit a run of bad form.