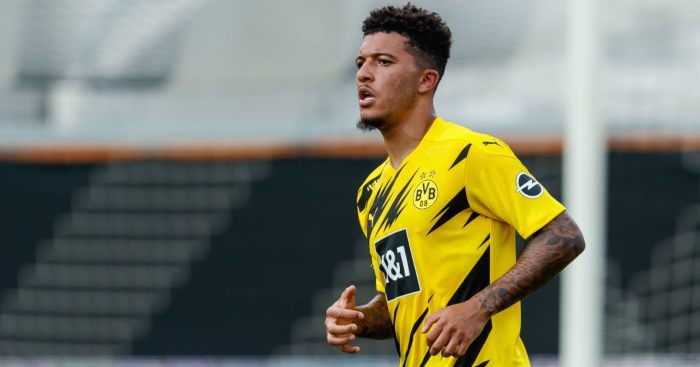 Dortmund chief executive Hans-Joachim Watzke believes Jadon Sancho may have been ‘subconsciously’ affected by rumours of a Man Utd transfer.

The winger was heavily linked with a move to Old Trafford in the summer following a glittering season in Germany.

Those rumours continue, despite Dortmund being adamant to keep him the England international.

READ: Souness slams one Chelsea player for ‘wandering’ in defeat

Sancho has endured a less productive start to the 2020/21 campaign. He’s scored just one goal in 12 Bundesliga appearances, during the recent victory over VfL Wolfsburg.

Watzke has now provided his stance on Sancho’s form and the Man Utd saga.

Speaking to German outlet Kicker (via ESPN), he said: “It was signalled that the fee offer would be paid in instalments over several years. It was all a theoretic discussion from then on.

“Maybe Jadon had subconsciously prepared for a move a bit. I believe he at least thought about it that much that he lost a bit of his ease, but for weeks now I found him trying very hard.

“I think he needs two, three goals and this could boost his form straight away. He is still one of the greatest talents there is.”

Sancho commented on his dip in form back in November, admitting that he was going through a ‘hard’ spell.

As mentioned by Watzke, the 20-year-old remains one of the brightest players in Germany.

His £100 million price tag is testament to his stunning form since making the switch from Man City.

Man Utd are also lining up a transfer for his teammate Erling Haaland.

Reports emerged recently showing that the Red Devils were now prioritising the striker to lead their lineup.