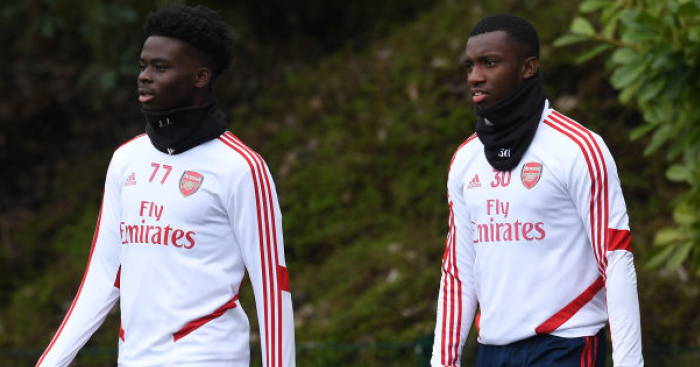 A 16-year-old linked with Man Utd and an Arsenal sensation could both call the Bundesliga home next season if Borussia Dortmund get their way.

The Bundesliga side have become well known for their ability to nurture the careers of talented youngsters.

England winger Jadon Sancho has blossomed into becoming one of the world’s most feared attacking threats, although Gary Neville curiously doesn’t believe he’s anywhere near a former Red Devils flop.

Erling Braut Haaland was the latest teenager to call the Westfalenstadion his home, though unlike Sancho, the Norwegian hitman may not still be in the country by the time he turns 20.

With Dortmund potentially set to lose some of their star attacking players in the summer, attentions have turned to who they could replace their outgoings with.

One such option is Arsenal starlet Bukayo Saka.

The 18-year-old has burst onto the scene this season, notching three goals and nine assists as he quickly established himself as a crucial component in Mikel Arteta’s starting eleven.

Operating primarily as a full-back but equally adept anywhere down the entire left flank, Saka has blossomed into becoming one of the country’s fastest rising stars.

His rise has not gone unnoticed by Dortmund, with the club previouslyreported to be keen in trying to tempt Saka to Germany.

UK newspaper the Mirror have taken it a step further, stating that Dortmund have ‘targeted the teenage Gunners’ defender’ as they seek to ‘plunder England’s domestic market again.’

Saka’s contract of £3,000 per week at the Emirates expires in the summer of 2021, and Arsenal are understandably keen to extend and improve it with all haste.

However, the teen star was noncommittal when asked about his contract situation in February.

Saka said (via the Metro): “I just leave all that stuff to my agent and my parents. I just enjoy my football and play my football. Do I want to stay? Like I said it’s for my agent.

“They’re sorting it out. ‘Of course I’m enjoying my football, enjoying playing under the new coach so we’ll see what happens.”

The 16-year-old Birmingham City youngster has already broken through into the Blues’ starting eleven despite his primitive age.

And according to the Mirror, his rapid progression has even seen Sir Alex Ferguson step in to attempt to convince him to sign on the dotted line.

However, Dortmund are described by the publication as ‘favourites’ to land Bellingham, though they will face a stern test in attempting to hold off the advances of Man Utd.