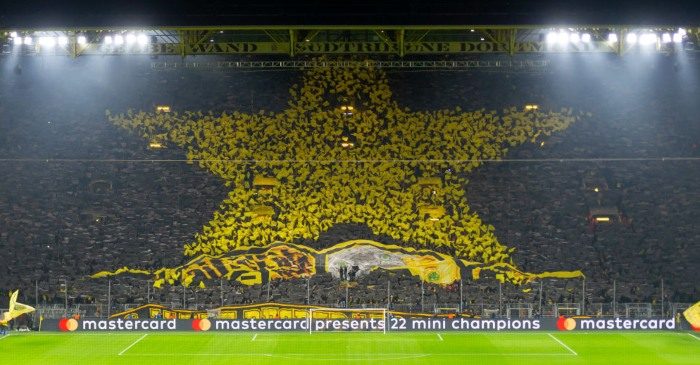 It is Tuesday lunchtime at a departure gate at Stansted Airport, and three Englishmen in Borussia Dortmund home shirts are waiting to board a flight to Germany. Sat near them is another small group of friends, less conspicuous without the yellow nylon until they begin talking excitedly about that evening’s match. An hour later on the plane, two more in front of me are clearly flying out for football.

At a hotel in the centre of the city, the two sets of guests directly in front of me in the queue have travelled for the same reason. One group flew in from Birmingham to Dusseldorf and have got the train into Dortmund; it is not the first time they have made that journey. At Dortmund Airport, a flight from Luton lands an hour before mine. Football tourism often focuses purely on those who fly into England to pay extortionate amounts for Premier League packages, but this is a two-way stream.

One report estimates that up to 1,000 English people attend Borussia Dortmund home games, higher than the average away attendance in League One. That figure sounds wildly fanciful until you hear familiar accents around the stadium more than two hours before kick-off ordering currywurst and ticking off items on their German football bingo card.

Germany is the renowned home of the best fan culture in Europe’s top five leagues. The stadiums have excellent facilities, the tickets are cheap, the atmosphere is wonderful and you can drink within sight of the pitch. It provides the perfect balance, romantic anachronisms of old-fashioned football meeting enough modern touches to keep the 2019 fan content.

Football tourism has long had a loyal culture in England, but it has gone mainstream over the last decade. Newspapers offer advice on the best long weekends, with package companies focusing purely on transporting Brits on footballing pilgramages. Those on the flight from Stansted have paid £55 for return journeys and £26 for their ticket to watch Dortmund play Inter. Even if you add in accommodation and transfers, that’s not much more than you might expect to spend on a Premier League away trip.

On these pilgramages, Dortmund is the mecca. The 24,000 single-tier Sudtribune is a regular header image on articles about German fan culture, and with good reason. It sets the tone for an extraordinary atmosphere, fans bouncing and constantly singing as if bound by an eternal contract. As Dortmund haul themselves back into the game and beat Inter 3-2, you become convinced by the power of the crowd as motivator and difference maker. Cliches are established because they contain truths; this really is football turned up to 11.

There is only one way to approach an experience like this for the first time: on foot, and from as far away as time and energy allow. You start alone, daydreaming about the images and videos you have seen of what awaits you. Part of you is worried that it won’t match up to your expectations; the rest knows it will probably surpass them. Slowly a trickle of supporters becomes a deluge, most talking in a language that you barely understand but with a cadence that makes it easy to translate. The same conversations take place in a thousand different languages. Going To The Match is a universal experience.

The Westfalenstadion is hardly the back-to-basics, ‘real’ football experience. It is a modern monolith, the yellow metal framework lifting the ground out of the earth in which the pitch sits. The stadium concourses are filled with shiny plastic stalls peddling overpriced merchandise, and contains the biggest pick ‘n’ mix selection I’ve seen since Woolworths. The ‘Borruseum’ club museum is a glass building placed near a newly constructed fan park and club superstore. Dortmund consider themselves to be a superclub.

But that misses the point. Those who travel to Dortmund, Milan, Barcelona, Warsaw and a hundred other places in between do so not in search of something inarguably wholesome, but something fun. Fun is an alien concept to many football supporters, wedded to their clubs and therefore wedded to its fortunes. When everything matters so much, you watch matches through a haze of masochism. Every minute setback makes you angry. Everything good only makes you happy until another setback comes along, and it won’t be long.

This is different, football as aesthetic and emotional spectacle, where the result doesn’t define your mood but the experience does. And because you focus purely on the experience, you enjoy it more. No nerves or unmanageable tension. No time spent frantically wishing for the game to end now or never depending on the scoreline.

Before we all became hopelessly infatuated by our clubs, we just went to watch the game. Going to the Westfalenstadion recreates early memories of football as pure escapism. The wide-eyed wonder when you first caught sight of the floodlights’ glare over a row of terraced houses. The smells of frying onions and cigarette smoke. The throaty roars of release from people who have been hardwired into hiding their emotions. The impossibly long walk through the stadium and up the steps, as if paying your dues for the magical view to come. The first sight of the vivid green pitch set against dark black sky. It is an impossible addiction to shake.

By Wednesday evening, most of the English supporters will have returned home. A couple I meet are going via Leverkusen to watch a second Champions League match in two days, but by Thursday they too will be safely back in their nest of normality. There are clubs to cheer and chide on Saturday afternoon, league tables to pore over and seasons to dissect. Football never stops.

But trips like these still live on, in the stories they share with friends and the tingles down the spine when they flick through pictures and videos and memories. Next year they will book a trip to a different destination and chase the dragon once more, plans forming in the mind before their plane has landed back in the UK.

Football tourism can be a dirty concept. It comes with the same inherent stigma as ‘armchair fan’, an insinuation that by travelling hundreds of miles rather than hundreds of metres to watch a team your experience is somehow less valid. But nobody should feel guilt for enjoying anything that harms nobody else. And nobody should feel anything but joy when reinforcing their love for live football.