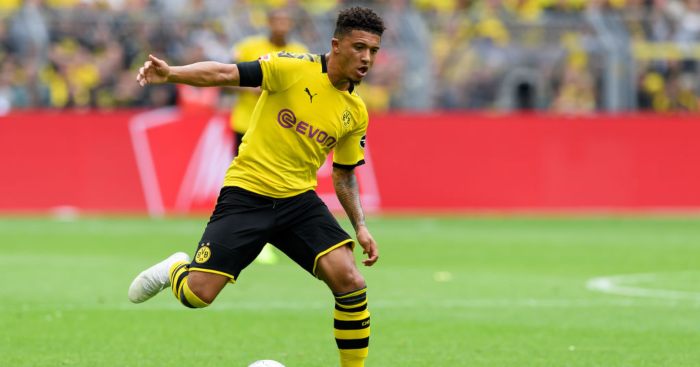 Borussia Dortmund have rewarded Jadon Sancho with a new deal at the club amid speculation over a move away from Signal Iduna Park, according to reports.

The England international reportedly turned down interest from Manchester United and Paris Saint-Germain in the summer transfer window and now Dortmund have moved to protect their own interests.

The Daily Mail claims that Sancho has been handed a new deal by the German giants worth just short of £10million a year.

His previous contract was worth around £75,000 a week and was set to run until the summer of 2022 – but now Dortmund have given him a ‘lucrative extension to his previous deal’.

The 19-year-old’s new salary is reportedly £190,000 a week with ‘his status as one of the hottest prospects in world football has now been acknowledged by Dortmund’.

Sancho has been heavily linked with moves to United and Manchester City in the past and the two clubs ‘will test Dortmund’s resolve’ in the future.

The new contract means any potential buyers will have to ‘break the bank on wages as well as a transfer fee to lure him away next summer’.

The 19-year-old England international joined the Bundesliga side from City for £7million in August 2017 and contributed 12 goals and 17 assists in his breakthrough season.

He was named in the Bundesliga Team of the Year and his form has drawn interest from a host of top clubs across Europe.