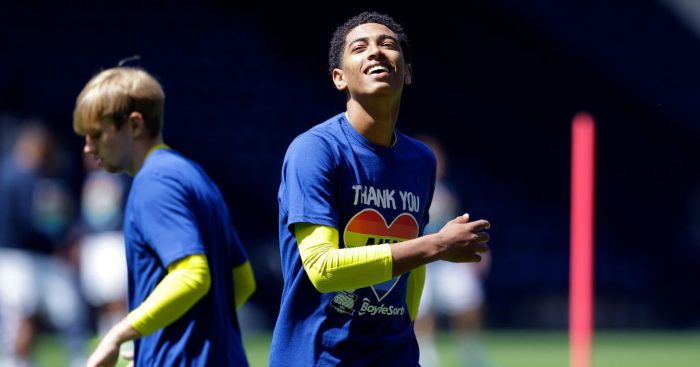 Man Utd have lost the race for Birmingham City youngster Jude Bellingham with Borussia Dortmund set to sign him, according to reports.

The 16-year-old has become one of European football’s most sought-after young talents after a stunning breakthrough season in the Championship.

Bellingham has chipped in with four goals and three assists this term and his performances have led to serious interest from Man Utd and Dortmund.

There had been reports that Man Utd were prepared to offer Bellingham a first-team role next season in an attempt to lure him to Old Trafford, while there were also claims that he had been shown around United’s Carrington training complex by Sir Alex Ferguson.

However, ESPN now claims that Dortmund are ‘expected to announce the Birmingham City midfielder’s arrival in the coming days for a fee believed to be around £20million’.

Bellingham had his ‘heart set on a transfer to the Bundesliga’ and Dortmund ‘are set to pay a training compensation in the £20m region’ as they tie up a deal for the Englishman.

Meanwhile, Rennes president Nicolas Holveck claims that another Man Utd target, Eduardo Camavinga, will remain at the French club for at least another season.

The 17-year-old has taken Ligue 1 by storm at such a young age, making 36 appearances for Rennes in all competitions in central midfield this season.

It was rumoured at the end of May that Man Utd had ‘the upper hand’ over Real Madrid ‘as they’re willing to loan the teenager back to the Ligue 1 club for a further 12 months’.

However, it now looks like Camavinga will definitely stay put at Roazhon Park for the time being.

“We are currently in a spectacular crisis,” Holveck said. “When we see the great clubs, I am not sure that there will be great movements. We have not yet set a price for Camavinga but we have decided that he will continue with us next season because we are an ambitious team.

“We have agreed with Eduardo that he will stay with us next season. He is a smart player and he knows where his sporting interest would be best served at the moment. Irrespective of that, we haven’t actually received any offers for him.”