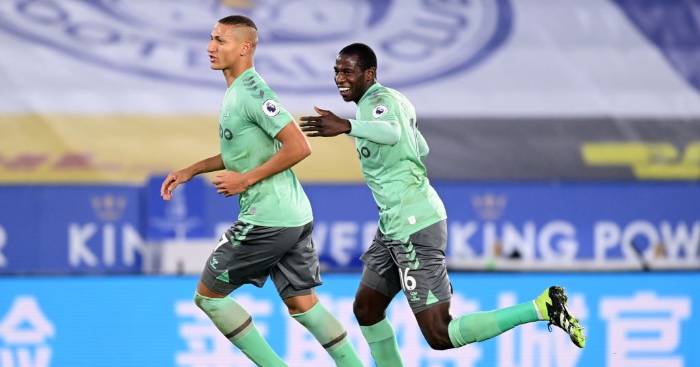 Abdoulaye Doucoure has outlined Everton’s Premier League ambitions and urged the Toffees to keep the pressure on at the top.

Richarlison and Mason Holgate struck to earn an impressive 2-0 win at top-four rivals Leicester on Wednesday.

The Toffees climbed to fifth in the Premier League, ahead of Saturday’s visit of Arsenal, and Doucoure wants them to maintain their form.

“We knew before the match we could close the gap on the teams at the top,” said the midfielder.

“It was the same (mindset) before the game (a 1-0 win) against Chelsea. To win these two games is very good for us and we need to keep going in this way.

“It was a great result. We fought for every ball. We know this league is very competitive and the teams are very close together in the table.”

Richarlison ended a three-month wait for a Premier League goal, while Holgate’s crucial strike was his first in the top flight.

Dominic Calvert-Lewin has scored 11 of the Blues’ 23 league goals this season and Doucoure knows the importance of different scorers.

“We are so happy for Mason and Richarlison,” he told the club’s official site. “Mason scored from a set-piece and it is important to be dangerous from them.

“Richarlison also scored, which for his confidence is very good.

“Dominic has been in great form, of course, he didn’t score against Leicester but it is good for the team to have other goalscorers, too.”