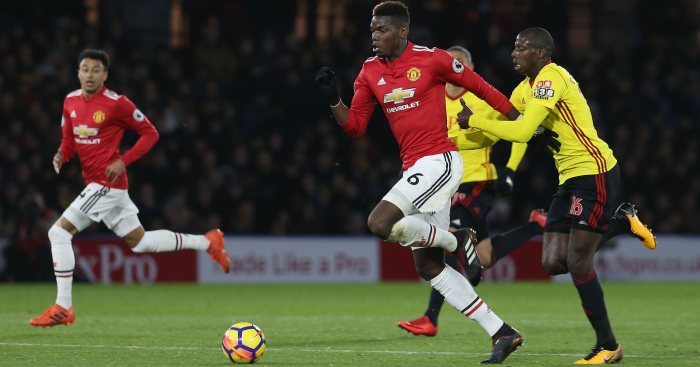 Doucoure has been an integral figure as the Hornets have won their first four Premier League games and played in the same France age group squads as Pogba.

Doucoure said: “He was the same (person). He liked to show off. He’s a very nice guy, always very natural.

“Today he’s in a different dimension. He’s a superstar now.

“I’ve known him for a long time. It’s always great to play against him.

“Of course I want to be better than him on the pitch and help my team as much as I can to try to win this battle in midfield.

“If Paul is a little bit less (influential) for his team, for sure it’s better for Watford.”

The pair are still in touch and Doucoure believes personality is important for football.

He added: “We speak together sometimes. I sent him a message during the World Cup and congratulated him.

“He has this personality. He got this because he’s good on the pitch.

“Paul and (Manchester City’s Benjamin) Mendy bring a lot of personality and show off. It’s good.”

United have lost two of their four games and their boss Jose Mourinho is embattled. Doucoure called for the Hornets to be ruthless.

“We have to respect Man United, for sure,” he added.

“(But) we’re in a good position, we play at home. We’ll give everything, like we did against Tottenham, to try to win.

“Of course if they’re in a little bit of trouble we have to take our chance to try to win this game.”

Watford’s fine start to the campaign has raised expectations, but Doucoure is staying grounded.

“It’s only four games. In the Premier League it’s nothing. The championship is very long.

Boss Javi Gracia knows Watford cannot look too far ahead, saying: “We know the competition will put us in our place.”