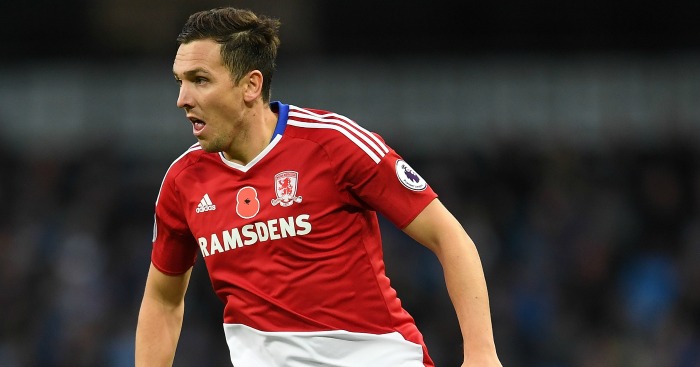 Stewart Downing is refusing to give up on his Middlesbrough career despite a training ground disagreement with Aitor Karanka.

The 32-year-old former England midfielder and Boro’s Spanish head coach are understood to have had a difference of opinion during the build-up to Saturday’s FA Cup sixth-round clash with Manchester City.

Downing did not make the matchday squad for that game and when asked about his and January signing Patrick Bamford’s exclusion after the game, Karanka spoke of his need for “18 fighters”.

Sources on Teesside have confirmed that Downing, who was disgruntled to have been left out the the squad for Premier League trip to Stoke on March 4, raised the issue with the Spaniard and received a blunt response.

Karanka is understood to have been less than impressed with Downing’s efforts on the training pitch in recent weeks, something to which he alluded after Saturday’s game.

He said: “Where the players show me that they are ready to play and they are fighting and they are going to fight for the club is on the training ground every day.

“I am with them every day and on Friday, I will always choose at least 18 fighters.”

However, Press Association Sport understands Downing, while growing increasingly frustrated with his lack of opportunities and concerned that he is shouldering a disproportionate share of the blame for Boro’s failings, has far from thrown in the towel and is determined to force his way back into contention.

Sources close to the player have insisted he has not downed tools and point to his confrontation with Karanka as evidence of his desire to help the club at which he made his name to drag itself out of relegation trouble.

The relationship between the two men has been fractious at times over the last year or so and Downing has started only 13 league games to date this season, the last of them at left wing-back against Crystal Palace following George Friend’s late withdrawal.

Indeed, he was made available for loan during the January transfer window and there was significant interest in him, although Boro would not allow him to join a direct rival and the player was unwilling to return to the Sky Bet Championship, so he remained where he was.

Nevertheless, Karanka is understood to be relaxed about the situation and prepared to consider Downing for selection once again provided he feels his work on the training ground merits it.

Boro fans were delighted when the academy graduate returned home in a £5.5million switch from West Ham in July 2015, and he played a key role in helping the club win promotion back to the top flight last season.

But it remains to be seen how big a part he plays as the campaign draws to a close with the Teessiders having slipped to 19th place in the table and three points from safety with 11 fixtures remaining ahead of Sunday’s showdown with Manchester United at the Riverside Stadium.

Karanka’s side are without a league win in 10 attempts dating back to December 17 and have scored just three goals in the process.