Home F365 Says Draw brings dissent, but Arsenal have what they deserve… 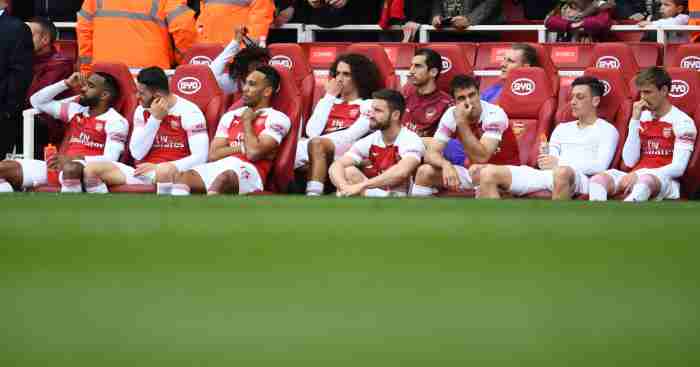 Many Arsenal fans greeted their team’s failure to beat Brighton with boos and a sharp exit prior to the post-match ceremony held to wave off three players and, by coincidence, their hopes of finishing in the top four. But despite the derision, the home supporters can’t say Unai Emery’s team have underacheived. In fifth place, the Gunners find themselves exactly where they currently belong.

It could be argued that none of Tottenham, Chelsea, Manchester United or Arsenal deserve the security of a top four place with a week of the season still to play when all of them have spent the last few weeks treading on rakes. But the Premier League table currently presents a fair reflection of each of the Big Six, with only Manchester City and Liverpool to squabble over who edges top spot, and Spurs and Chelsea left to argue over third.

When you weigh up their qualities with their array of faults, it is hard to build a convincing case for Arsenal deserving a place higher or lower than that they occupy. They are in better shape than United, but still have some work to do to match the London rivals ahead of them.

The 1-1 draw with Brighton showcased in greater detail their frustrating weaknesses rather than their admirable strengths. Emery’s side were open in defence, disjointed in midfield and frustrating in the attacking third.

It was a tale of two penalties. Pierre-Emerick Aubameyang’s early spot-kick which Arsenal failed to build on after a bright start, followed by Glenn Murray’s leveller, coming after Henrikh Mkhitaryan’s sloppy pass on the edge of Brighton’s box allowed Solly March to carry the ball all the way to the opposite goal-line, near which Granit Xhaka committed a foul with a half-arsed attempt at a challenge.

Xhaka was booed off by sections of the home support when Emery tried to rouse his players with a triple substitution with 13 minutes remaining, and though the Switzerland midfielder was off-colour against a buoyant Brighton side revelling in their new-found security, he was certainly not the only Arsenal player to struggle with finding their rhythm.

Arsenal players look delighted to be out for a lap of dishonour. pic.twitter.com/9yeC3sKY8i

Even their two brightest lights, Aubameyang and Alexandre Lacazette, failed to shine. When the golden opportunity Arsenal were looking for fell to Aubameyang seven yards out in the centre of the goal, the 20-goal striker sliced his scissored volley wide of the target.

It was one of the rare occasions that Shane Duffy and Lewis Dunk allowed a red and white shirt a sniff at goal. While the Seagulls attacked with the freedom that safety provides, Duffy and Dunk defended as if their lives still depended on it. One clearing header by Duffy late on was celebrated by Dunk as enthusiastically as any goal scored by Chris Hughton’s side.

Arsenal did not appreciate it but this was a defensive clinic laid on by Dunk and Duffy and Emery has to hope that his own rearguard was paying attention. Despite the manager claiming that his side were “defensively very strong”, Brighton were able to create as many good chances as Arsenal mustered in their attempt to find a winner and delay the inevitable. Murray’s strike brought up an ignominious half-century for the Gunners, with Emery’s men having conceded 50 or more goals in consecutive top-flight campaigns for the first time since 1982-83 and 1983-84.

That statistic serves as proof if it were still needed that Emery has to prioritise the reinforcement of his defence this summer, regardless of what budget he is presented with. His coffers could still be swelled by a Champions League place via a Europa League triumph which would add a considerable dollop of gloss to a confusing season. Whatever happens in Valencia and Baku, Arsenal cannot claim they deserve more than what they have reaped from Emery’s still-creditable first campaign in the Premier League. But the Europa League still offers the opportunity to make it a rousing success and put some smiles back on glum Gunners faces.