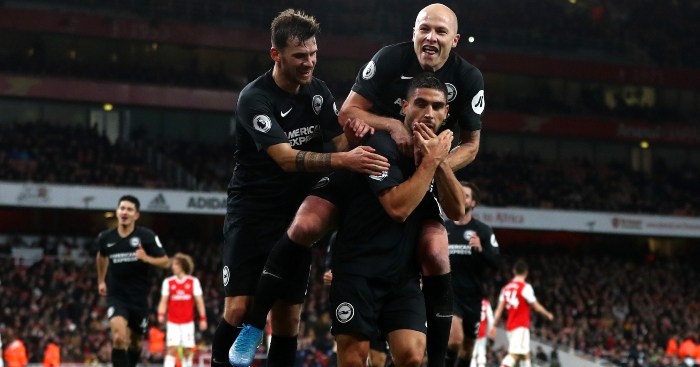 Lewis Dunk revealed turning Arsenal supporters against their team was part of the plan which saw Brighton pile further misery on the Gunners on Thursday night.

It also extended a winless run for the hosts to nine games, their worst since 1977, as the Seagulls celebrated a first-ever away win against Arsenal.

Adam Webster’s finish had given Graham Potters’ side a deserved half-time lead with Arsenal jeered off by their own fans as Ljungberg was given a harsh wake-up call as to the size of the task in front of him.

The 42-year-old Swede replaced Unai Emery after he was sacked on Friday but his side could only follow up a 2-2 draw at struggling Norwich with another insipid display.

Brighton had not won on the road since an opening weekend victory at Watford but captain Dunk insisted they aimed to use the unease around the Emirates as a way to see off their beleaguered opponents.

“I think if we put them under pressure, and got into them early like we did, I think it was going to be tough for them,” he said.

“They are going through a tough time, and if we got on top of them, the crowd would go against them and we managed that.

“Obviously you want to start a game well and get on top of any team but obviously they are going through a tough time so we knew it was going to be really important to do that here.

“So the crowd turned on them a bit, especially at half-time when they were booing them so it was a nice win.

“They are a top side, we were probably expecting more but it was credit to us the way we can play football.”

Dunk felt the performance from Brighton, especially in the first half, was vindicated by the response of Arsenal’s disgruntled fanbase – who jeered at both half-time and full-time – for what was a fine result for Graham Potter’s side.

“I think it has got to be a testament to us and the way we performed in the first half,” he replied when asked about the booing.

“We are a good side and hopefully we can keep working hard in training and keep improving. We are still learning under this manager and we have a long way to go.

“It is a massive win and we are all buzzing in the changing room. In the end, we won dirty if you look at it in the second half.”

Ljungberg conceded the reaction from the home fans did little to help his players.