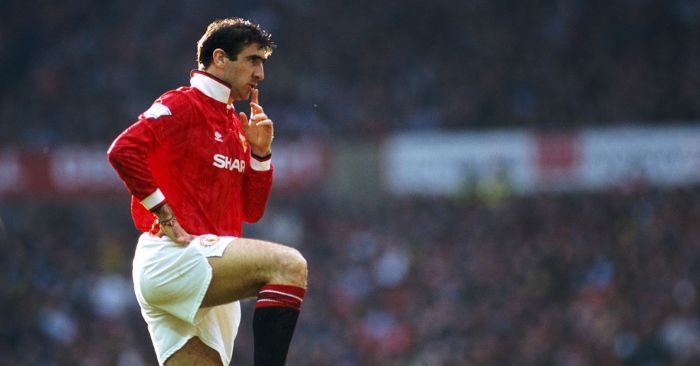 The signing in question must have joined a club that had not previously won the Premier League title before instantly transforming them into champions. Like Paulo Dybala will with Tottenham when he definitely eventually joins.

Eric Cantona
It is somehow possible to underestimate Eric Cantona’s impact at Manchester United. A quick glance at his résumé shows that he supplemented his First Division title with Leeds in 1991/92 by winning four of the first five Premier League crowns with Manchester United, transferring his dominance of England’s domestic game between the two bitter rivals in 1992. But Alex Ferguson’s side were further than ever from ending their 26-year wait to reign supreme when he first popped his collar at The Cliff that November.

United, runners-up the previous season, were eighth when he joined, 16 games deep and trailing leaders Norwich by nine points. They beat Arsenal two days later, with an ineligible Cantona watching from the stands, before winning 17 and losing just two of their subsequent 25 league games. The Frenchman scored nine goals – beaten only by Mark Hughes’ 15 – assisting a further 11.

Ferguson would later credit Cantona with having helped transform the “average” Gary Neville and David Beckham, while some random fella also wrote this:

‘Cantona’s story does not begin and end with Manchester United, but there is plenty enough material between his arrival and departure to write an entire series of novels. For if Cantona altered the future of the Premier League as a whole, he also sparked the advancement of its most successful club.’

Chris Sutton
When Alan Shearer’s 16 goals garnered a fourth-placed finish and a 13-point gap to champions Manchester United in 1993, Blackburn responded the only way they knew how. They outspent the entire division, bringing in Tim Flowers, David Batty, Ian Pearce and Paul Warhurst to rise two places and close to within four points of Ferguson’s side come 1994.

Little more could have been asked of Shearer, who turned in a remarkable 31 goals in 40 games – or almost half of Rovers’ overall 63 league strikes – to no avail. Instead of settling for such irresistible firepower and concentrating on improving his options in defence and midfield, Kenny Dalglish opted to double down. Chris Sutton joined for a British record £5m after finishing joint-third in the Golden Boot race with 25 goals in 41 matches for 12th-placed Norwich.

It proved to be a masterstroke. Sutton’s personal output ostensibly suffered, scoring just 15 goals in his first season at Ewood Park, and only two after November. But he proved to be the perfect foil for Shearer, who registered the most prolific campaign of his entire career to win Rovers their first top-flight title since before World War I.

Marc Overmars
Little did the footballing world realise, but the appointment of Arsene Wenger as manager ensured it was only a matter of time before Arsenal regained their English crown. The Gunners won the title in 1991 but yo-yoed from 4th to 10th, then 4th again, before dropping as low as 12th under George Graham and Stewart Houston and rising as high as 5th with Bruce Rioch at the helm.

While the August 1996 arrival of Patrick Vieira, the ascension of Wenger two months later and the February 1997 advent of Nicolas Anelka helped Arsenal on their way to third behind Manchester United and Newcastle, there was something lacking. Marc Overmars was identified as the missing ingredient.

“He’s a winger-type who can go in the space, is a good dribbler, and we needed this type of player,” Wenger said at the time. “We had a problem this season, especially at home. Don’t forget that we were maybe the best away team but we lost the championship at home. I think we needed more power and more speed at home, and more penetration. I think Marc has won everything until now. The four or five years he has in front of him are the best ones, and that’s why I went for him.”

It should come as no surprise that the £7m gamble paid off. Overmars scored 12 goals and assisted five in the Premier League, with 11 of those involvements coming at Highbury. The delightful Dutchman combined his decisive strike in the 1-0 win over eventual runners-up United in March with the opener in the FA Cup final victory against Newcastle in his first season.

Petr Cech
Carlo Cudicini can perhaps count himself unlucky. Chelsea’s Player of the Year in 2002, the Italian beat Antti Niemi and Brad Friedel to win the ITV ‘Golden Gloves’ award for Goalkeeper of the Year in 2003. By 2004 he was battling both injuries and competition, losing his place to European Championships star Petr Cech.

Cudicini was great; Cech was sodding brilliant. His first season at Stamford Bridge saw him set a new Premier League record of 1,025 minutes without conceding, which would eventually be beaten by veteran Edwin van der Sar four years later. The keeper also set the mark for clean sheets in a single season at 24, conceding a quite ridiculous 13 goals in 35 games.

Chelsea would surely have reached the Promised Land eventually, but Cech certainly hastened the process. They finished 11 points behind Arsenal in 2003/04, conceding four more goals. They strolled to the title by 12 points a season later, with the Gunners letting in 21 more goals.

Sergio Aguero
The last piece of the jigsaw was always a reliable, elite striker. Vincent Kompany would eventually morph into a phenomenal centre-half after joining in 2008, while David Silva and Yaya Toure added a touch of trophy-laden class by 2010. Robinho, Carlos Tevez, Emmanuel Adebayor, Craig Bellamy, Roque Santa Cruz, Mario Balotelli and Edin Dzeko all auditioned for Manchester City’s final role to varying degrees of success, but none came close to Sergio Aguero’s brilliance.

Khaldoon Al Mubarak’s first season of ownership ended with the club in 10th, five points above Wigan and 40 behind Manchester United. By 2009/10, they had risen to 5th with 19 points separating them from Chelsea. They came even closer a year later, settling for third.

Then Aguero happened. Not since Franny Lee in 1972 did City have a striker who scored 30 goals or more in a single top-flight season. They won their last English league championship four years prior. But their Argentine hero helped bridge both gaps in the most memorable way possible against QPR on the final day of 2011/12. Aguero has been their top scorer in all competitions in all but one of his eight of his campaigns on Eastlands, sharing the honour with Tevez in the other.

N’Golo Kante
As the only outfield player to win consecutive Premier League titles at two different clubs, N’Golo Kante could claim to have transformed the fortunes of both Leicester and Chelsea. But while the latter fully expected the midfielder to have such an effect, no-one could have predicted the events that unfolded at the former.

Kante joined the Foxes in 2015 for £5.6m, but history should not be rewritten: he was never intended as the replacement for the influential Esteban Cambiasso. That role was instead planned for Gokhan Inler, a much more experienced, defensive-minded and stylistically similar player. As if to emphasise the point, Kante made his Premier League debut as a substitute for Jamie Vardy, and started as a roaming left-winger in a League Cup tie against Bury a couple of weeks later before another league start in the same position.

But Claudio Ranieri soon realised that he was driving a Ferrari to the supermarket instead of letting it embrace the open road. Kante was moved central, Inler was not seen beyond December and did not make enough appearances to pick up a Premier League winner’s medal, and Kante established himself as one of football’s greatest – and just bloody loveliest – bargains.