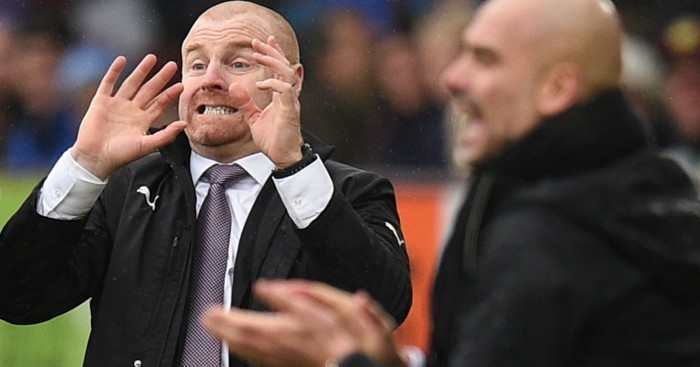 In his time at Turf Moor, Dyche’s team have taken points against all the top Premier League teams except Arsenal, with the Clarets losing 10 games in a row since a 1-1 draw in 2009.

They have come very close on several occasions. In three games in a row in 2016 and 2017, Arsenal scored stoppage-time winners, twice through contentious penalties.

Dyche said: “I am not going to start harping on about some of the decisions that have gone against us but that has certainly played its part.

“It didn’t last season but it did before that. I have always said you need to be on top of your performance against the top sides. They might be having a quiet day, you might get the rub of the green, you might need a decision.

“They might be a bit more measured now with VAR and you certainly wouldn’t have the decisions go against us. But, when it comes down to it, you have to perform.

“The top sides are there for a reason, they have good individuals and they are good as a unit, and if you don’t perform you very rarely get anything against anyone in the Premier League.”

Both teams began their seasons with victories, Burnley impressively beating Southampton 3-0 while Arsenal edged to a 1-0 win over Newcastle.

Gunners boss Unai Emery was busy in the transfer window, and Dyche said: “They are a good side who have spent a lot of money and there will be a different expectation maybe of the manager and what he is hoping to produce there.

“It looks like in early season and pre-season they have been slightly more defensive in their shape but I am not going to say they can’t attack because they definitely can.

“They do have a way of opening teams up, we have come across it many times before in the Premier League and they are one of the sides that are strong at doing that. Our job is not to allow that to happen and be effective in our own right and that is what we will look to do.”

Ashley Barnes was the star of the show last weekend with two goals, taking his Premier League tally for the calendar year to 11 – more than Mohamed Salah and Pierre-Emerick Aubameyang.

The combative striker is a fans’ favourite and is the subject of a newly released grime song by Burnley artist Bacchus.

“I played that to my kids and they seemed to think it was pretty good,” said Dyche. “I had a different view, it is not quite my style, but joking apart the lads have had a bit of banter with him about that.

“He had a pre-season when he played well but hadn’t scored and then he fired two in. I am pleased for him and pleased for the team because it was a good all-round performance.

“He is an awkward customer who has learned the game and has become more and more effective as the seasons have gone on. We want him to continue pushing himself and working hard for the team, which he always does.”

Dyche is likely to select the same team, with Danny Drinkwater earmarked for two reserve games next week.

The Chelsea loanee has not played any first-team football for a year, and Dyche said: “He came in fit generally but lacking in football fitness.

“He has been training hard with the group and doing extras, his general fitness is good but it is about getting that football fitness so that is the next step. We have a couple of games lined up next week and he will certainly get some football in them.”