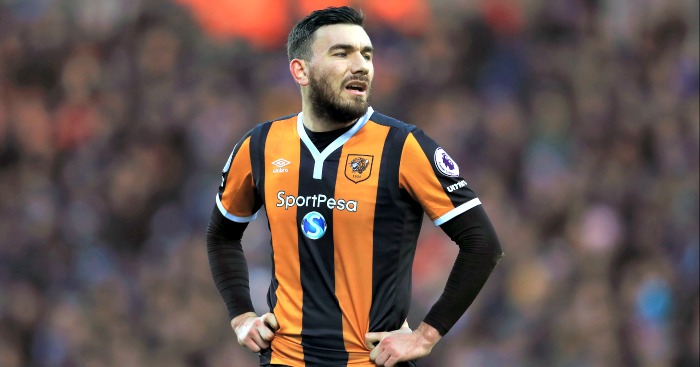 Sean Dyche insists Burnley could still be gazumped in the race to sign Hull’s Robert Snodgrass, while confirming fellow midfielder Dean Marney has been ruled out for the season.

The Clarets had an offer in the region of £10million accepted for Scotland international Snodgrass on Wednesday, yet they are not the only admirers of a man who has scored 12 times in 28 games for club and country this term.

West Ham are also keen on the 29-year-old while Middlesbrough manager Aitor Karanka has confirmed they have had an offer rejected from one of their relegation rivals.

Burnley, in a more healthy position sitting 10 points clear of the bottom three, are now allowed to open discussions with Snodgrass and his representatives over a switch to Lancashire but, for several reasons, Dyche is remaining cautious.

“There’s a considerable difference between any kind of fee being agreed and any player joining,” Dyche said.

“There’s no imminent moment that the player is here or going to sign. In theory they gave us a chance to speak to the player and take it from there. I get the feeling there’s a number of clubs who have been interested.

“The reality is I could be as confident as I want. If the player’s numbers don’t work or he didn’t want to come or another bid goes in even higher than our bid – which I’m told there’s a strong chance that that has happened – then that changes everything.”

The need for midfield reinforcements has been increased by the news 32-year-old central midfielder Marney, formerly of Hull himself, has torn his anterior cruciate ligament for the second time in two years.

Marney has made 21 appearances for the Clarets this term but sustained the serious injury when trying to stop Mesut Ozil instigating a counter attack in Sunday’s loss to Arsenal.

“He’s seeing a specialist (on Thursday) but unfortunately he has done his cruciate, his right ACL, which is the one he did before so it’s obviously a long period of rehab needed for that one,” Dyche added.

“It will be (season-ending), definitely. He’s come through that once before. In a good-bad way he knows the script, he knows what his rehab is, how long it is. It’s a blow for him and it’s a blow for us because he’d be playing and doing very well.

“He’s disappointed, obviously. It’s one of those things, it’s the unfortunate side of being a player. Sometimes these things happen.

“He’s a tough-minded man, he knows he’s got the full support of everything here. The only good thing is he has been through this before so he understands the rehab, and how long it takes and the different markers along the journey back.”