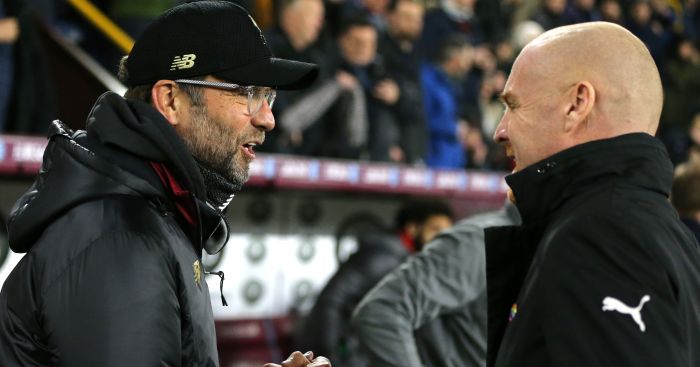 Burnley boss Sean Dyche has hit back at Jurgen Klopp after the Liverpool boss bemoaned the Clarets’ physical approach at Turf Moor on Wednesday night.

Liverpool eventually ran out 3-1 winners after bringing Roberto Firmino and Mo Salah off the bench in the second half.

The Reds though endured a scare after falling behind to a Jack Cork goal, before James Milner, Firmino and Xherdan Shaqiri – with a late breakaway goal – sealed the points for Klopp’s men at Turf Moor.

And afterwards Klopp said was unhappy with the approach from Dyche’s side, who are fighting for the lives at the foot of the table.

But speaking at his press conference ahead of Saturday’s clash with Brighton, Dyche said: “I was a bit confused.

“There were some excellent tackles. The only one that was questionable was Bardo’s (Phil Bardsley).

“Ben Mee’s was a fantastic tackle and I think Gomez realised that. We send him our best if there is any injury but it wasn’t from a bad tackle.

“Of course football managers can question whatever they like but I don’t think they can reinvent the rules. I don’t think there’s many fans in this country that want to see tackling go out of the game.”

Klopp was left animated at full-time on Wednesday night and afterwards he took a swipe at Burnley and the officials.

“I’m pretty sure I don’t make a lot of friends, but that’s not my job,” said Klopp.