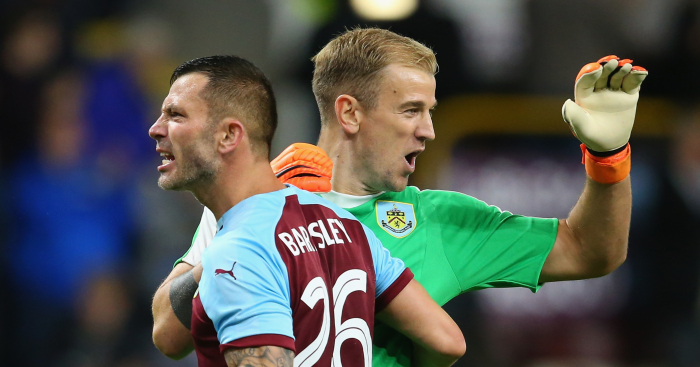 Sean Dyche is keen to avoid Joe Hart becoming the focal point of Burnley’s season after the summer signing turned in another impressive display on a successful night of Europa League action at Turf Moor.

After 12 years at Manchester City and 75 caps for England, Hart has brought an element of star quality and intrigue to the Clarets – something that will only increase once his fellow internationals Tom

Heaton and Nick Pope return to fitness and an inevitable three-way battle unfolds.

But his signing is already proving a shrewd one after three successive clean sheets to start his Burnley career.

Thursday’s 1-0 victory over Istanbul Basaksehir was the best yet, with a series of impressive saves from visiting winger Edin Visca keeping Dyche’s side in the game and paving the way for Jack Cork’s extra-time blockbuster.

Interest in the 31-year-old is sure to remain high as long as his performances stay at that level but Dyche appeared eager to share the spotlight.

“I’m surprised you’re not fed up, we’ve been talking about him for two weeks,” he said when quizzed about Hart’s contribution.

“I made a lot of the display of the team. There were a lot of really good performances – Ashley Barnes had an interrupted pre-season, Westy (Ashley Westwood) was excellent, the two centre-halves were absolutely top class. They deserve just as many mentions.

“Jeff (Hendrick) as well, and sometimes the fans can question him. But Joe definitely played his part, just so you’re happy.”

“Joe Hart made many clear saves,” said Avci. “He is an experienced and good goalkeeper. Yes, he made the difference between these sides, especially today.”

Dyche was open to a special mention for his match-winner, with Cork replicating his role in the defeat of Aberdeen a fortnight ago, when he also popped up to break the deadlock in extra-time.

Cork is known better for helping stop goals than scoring them but he is now just one away from matching his output from last term.

“Fantastic goals, both of them,” said Dyche.

“Tonight’s was a sublime goal. That is something we don’t get enough credit for. If that is a more trendy name than Jack Cork, it would be raved about.”

Cork earned a first England cap last year and although he was not part of the World Cup squad, a strong campaign in Europe might bring him back into the equation.

“That is for Gareth (Southgate) to decide, not me, but the fact we get players talked about is great,” he said.

“They are earning the right to be mentioned and they certainly deserve it.”