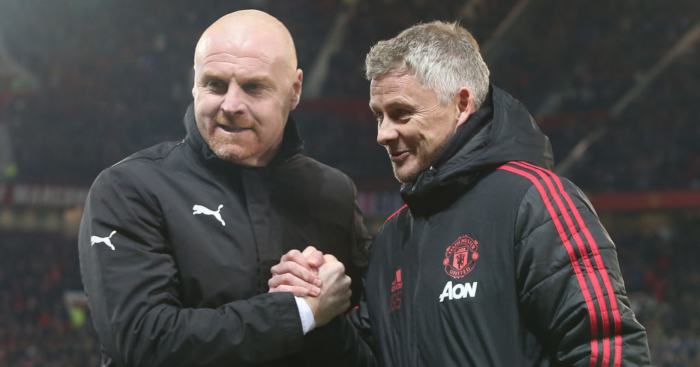 Sean Dyche would do a “better” job at Manchester United than current boss Ole Gunnar Solskjaer, according to former Chelsea player Jason Cundy.

Dyche has been in charge at Burnley since 2012, guiding them to the Premier League on two occasions, where they have now been for the last three seasons.

The Clarets finished seventh last campaign and after 35 matches this term they sit in 15th position, three points off West Ham in 11th and, more importantly, nine points ahead of 18th-placed Cardiff City.

United, meanwhile, had a resurgence after sacking Mourinho and appointing Solskjaer, who won 14 of his 19 games while in caretaker charge of the club, but it is now five defeats in seven since he was handed a three-year contract, highlighting the scale of the rebuilding job ahead in the summer.

During a conversation with talkSPORT presenter and United fan Andy Goldstein, Cundy claimed Solskjaer was not the right man for the job.

“Ole Gunnar Solskjaer is not the man to lead you out of this mess,” Cundy said.

“You look at the way United are playing at the minute. I saw them against Everton and that was unacceptable – that was Solskjaer’s team, it wasn’t Mourinho’s team.

“I’m expecting effort, and you don’t have to be a good player to put effort in.

“I’m sorry, but Burnley put more effort in against Chelsea on Wednesday night than I saw from Manchester United against Everton.

“Sean Dyche would get a better tune out of this Manchester United team right now than Solskjaer.

“There’s no way a Sean Dyche team would have been beaten 4-0 at Everton.”

Goldstein asked: “Are you telling me Sean Dyche would be a better Manchester United manager than Ole Gunnar Solskjaer?”

“Sean Dyche is a better manager than Solskjaer. He’d get more effort and commitment out of the players.”

“Solskjaer is NOT the man to lead you out of this mess, we know that now.” 🤔

“Dyche is better than Solskjaer, he’d get more out of this United team now.” 🔴@JasonCundy05 says Ole Gunnar Solskjaer is not right for #MUFC 🗣 pic.twitter.com/sEjZkgX8Lj