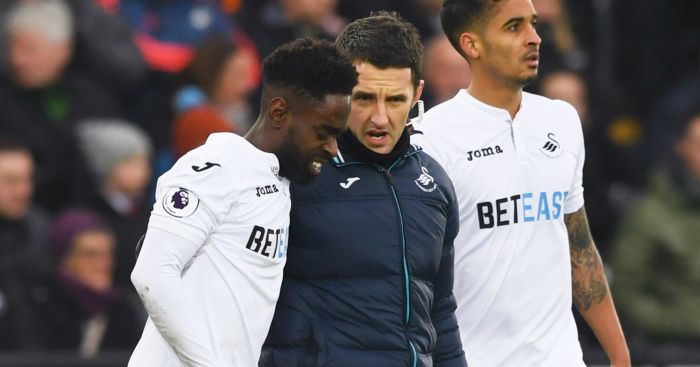 Swansea winger Nathan Dyer will miss the rest of the season after rupturing the Achilles tendon in his left ankle during Sunday’s Premier League match against Leicester.

Dyer played the first seven minutes against the Premier League champions before limping off, and a scan on Monday confirmed the extent of the injury.

The 29-year-old, who earned a Premier League winner’s medal with the Foxes last season, will now need surgery, the Welsh club announced on their official website.

Dyer had featured heavily during Paul Clement’s reign, making a total of five appearances having missed the earlier part of the domestic campaign with an ankle problem

Jefferson Montero is edging closer to a return to action with the Ecuador winger currently sidelined with a hamstring injury.

Dyer, who first arrived at the Liberty Stadium from Southampton in 2009, signed a new four-year contract with the club in the summer.

During his time with the Swans, Dyer has helped the Welsh club secure promotion to the Premier League and played an integral role in Swansea’s Capital One Cup triumph over Bradford in 2013 – the first major trophy in the club’s history.