Home All The News Dyke has ‘serious concerns’ over Lille security 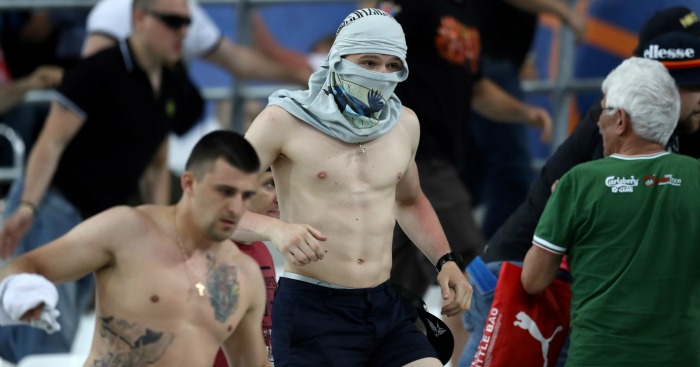 FA chairman Greg Dyke has warned UEFA he has “serious concerns” about security arrangements ahead of Thursday’s clash with Wales and says that stewarding at England’s Euro 2016 match with Russia was “unacceptable”.

In a letter to European football’s governing body, Dyke said his organisation is taking the threat to kick England out of the tournament seriously but defended the role of English fans in the crowd trouble during Saturday’s match with Russia.

UEFA’s executive committee on Sunday warned the FA and the Russian Football Union “it will not hesitate to impose additional sanctions…including the potential disqualification of their respective teams” should fan disorder continue.

But while Dyke condemned the trouble involving England supporters in the streets of Marseille, he insists video evidence proves Russian fans were to blame for the ugly scenes inside the Stade Velodrome, a claim he feels is backed up by UEFA’s decision to only instigate sanctions against Russia.

Dyke wrote: “Whilst we absolutely share the executive committee’s concern regarding these abhorrent scenes, particularly in the Stade Velodrome on Saturday night, I would like to make some serious points.

“The implication in your jointly-addressed letter is that English fans were in part responsible for the terrible incidents at the end of the match with Russia. This is contradicted both by the video evidence and by the fact your independent disciplinary bodies have only instigated sanctions against the Russian Football Union.

“We believe the stewarding arrangements in place were unacceptable. Supporters were able to get in with fireworks and flares, and then let them off, and there was insufficient segregation between the Russian and English fans, particularly given the events of the previous two days.

“Having said that let me be clear, we join you in condemning the horrible scenes in Marseille away from the stadium on Thursday, Friday and matchday.”

England manager Roy Hodgson and captain Wayne Rooney released a video on Monday in which they urged England fans to stay out of trouble.

But Dyke has called for security to be improved in the build-up to Thursday’s match with Wales in Lens – particularly as Russia play Slovakia in Lille on Wednesday.

“We are planning to use our high-profile individuals to ask English fans to act responsibly and in a respectful manner and we take seriously your suggestion of sanctions,” added Dyke.

“We understand there is to be an alcohol ban across the host cities and we would welcome this, particularly in Lille on Wednesday where many English fans have been asked to gather ahead of Thursday’s match against Wales in Lens.

“We have, following consultation with the authorities, advised our supporters without tickets for the match in Lens to congregate there, and whilst we will be working hard to positively influence their behaviour we have serious concerns around the security arrangements for the city in the next few days.

“These concerns are heightened with the knowledge that Russia will play in Lille on Wednesday afternoon.”

Earlier on Monday, Roy Hodgson and Wayne Rooney recorded a video message for supporters, calling for them to act responsibly and respectfully and avoid incident in the coming days.

Russian and English fans are again due to be in close proximity, having been scheduled to play just 23 miles apart in Lille and Lens on consecutive days.

A sizeable Welsh contingent will also be on hand, bring the ‘derby’ atmosphere into the equation too.

“As England manager I am very concerned about the threat now hanging over us and the sanctions that could possibly be imposed on the England team,” said Hodgson.

“We’ve worked very hard to get here and we really desperately want to stay in the competition. I’m appealing for you to stay out of trouble, to try and make certain these threats that are being issued are never carried out and we are able to attempt the best we can to stay in this competition by football means.”

Rooney, representing the players, added: “I’d like to thank England fans for the support inside the stadium against Russia and now we have a big game coming up against Wales I’d like to ask the fans please if you don’t have a ticket please don’t travel.

“And for fans with tickets please be safe, be sensible and continue with your great support of the players. Thank you.”