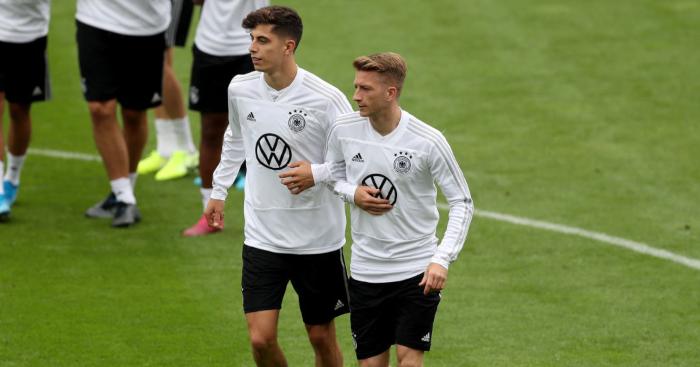 Bayer Leverkusen’s Kai Havertz has hinted that he could be open to a move next summer after speculation he could move to Liverpool or Manchester United.

The attacking midfielder was brilliant last term with 20 goals in 42 appearances, earning comparisons to the likes of Toni Kroos and Arturo Vidal – despite usually playing in a wider role than the former Bayern Munich duo.

Reports claimed the 20-year-old was attracting the interest of as many as five Premier League clubs, with Manchester City, Arsenal and Chelsea also keeping an eye on him.

Havertz, who made his international debut 12 months ago, was also linked with German heavyweights Bayern Munich, along with RB Leipzig forward and another reported Liverpool target, Timo Werner.

However, Bayern were not able to complete a deal for either player – but Havertz says the rumours have not fazed him.

“They haven’t scared me off,” he told Sky Germany (via Bulinews).

“I don’t know exactly what it was like with Timo [Werner], but it just didn’t happen for me this year. I think there were a number of reasons why.

“But I’m happy to be here and stay in Leverkusen for another year. We’ll see what will happen next summer.”

Bayer Leverkusen, who are competing in the Champions League again this year after finishing fourth in the Bundesliga, warned potential suitors away this summer by placing a €100m price tag on their academy graduate – who remains under contract until 2022.