Wrap them in cotton wool. Here are the Premier League players each club can ill afford to lose this season... 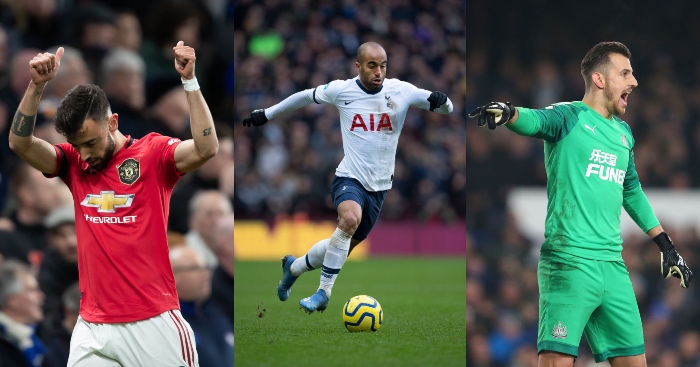 After Jose Mourinho insisted “the situation couldn’t be worse” as Tottenham are down to the striking bare bones following an injury to Son Heung-min, we look at the player every Premier League club can ill afford to lose before the end of the season…

ARSENAL – Pierre-Emerick Aubameyang
Youth product Eddie Nketiah has returned and Alexandre Lacazette has now stopped the rot after scoring in the 4-0 win over Newcastle – and daring to celebrate – but Arsenal remain reliant on Aubameyang. Without the Gabon international’s 15 Premier League goals this season, the Gunners would be 15 points worse off.

ASTON VILLA – Jack Grealish
Perhaps not the most important player to a club in a relegation battle ever, as the fanfare surrounding Grealish suggests, but Villa would really be struggling without their sculpted-calved captain. He’s their top goalscorer (7) and assist maker (6), makes the most key passes (2.8 per 90 minutes), and is the most fouled player in the division (4.9 times per 90 minutes). Enjoy him while you can Villans.

Jack Grealish is showing James Maddison how to play football.

BOURNEMOUTH – Josh King
The 17th striker Manchester United targeted in January [unverified] before they plumped for Odion Ighalo. The Norwegian was very keen on a return to Old Trafford, but relegation flirters Bournemouth understandably blocked his exit given they have lost eight of the eleven Premier League games he’s missed through injury this season.

BRIGHTON – Lewis Dunk
While the arrival of Adam Webster from Bristol City in the summer interrupted the Dunk-Duffy axis that was so key under Chris Hughton, there’s no doubt as to who is Graham Potter’s first choice centre-back. The Brighton skipper has started all but two Premier League fixtures this season – games they lost to Leicester and Spurs. He’s also the club’s third top goalscorer (2) and has the second most assists (3).

BURNLEY – Dwight McNeil
The Manchester United youth product’s primary job – as it is for every Burnley player – is to work his f***ing arse off. Which makes the stamina he has to beat a right-back and swing in crosses for the Clarets’ penalty area bulldozers all the more impressive. Moments of pure skill can be a rarity watching Burnley, but not when McNeil is on the ball.

CHELSEA – Jorginho
Frank Lampard hasn’t got us fooled; Chelsea are in real trouble. The extent of N’Golo Kante’s injury remains unclear, and although Matt Stead claimed in 16 Conclusions that the Blues may genuinely consider selling the World Cup winner in the summer, they are now very short in central midfield with massive games against Spurs and Bayern Munich to come. If Jorginho wasn’t indispensable before, he certainly is now.

CRYSTAL PALACE – Wilfried Zaha
Zaha hasn’t had the best season, with Palace suffering for the constant speculation linking their star asset with a move away. And it’s unsurprising he’s desperate to leave; Palace have got a very poor squad. According to transfermarkt the Ivorian’s market value (£50m) is over double that of the second most valuable player at the club, Luka Milivojevic (£22m). Cenk Tosun (£13m) is third. Enough said.

EVERTON – Richarlison
£85million is a lot of money for Richarlison, and perhaps even a transfer gamble they should take. But the Toffees may struggle to keep the Barcelona-linked forward in the summer anyway, should he continue to score goals like his fine solo effort against Palace. Big Dunc stuck the Brazilian and Dominic Calvert-Lewin up front together and the seldom-seen striking partnership has continued to flourish under Carlo Ancelotti. Maybe Barca should sign both of them…

LEICESTER – Jonny Evans/Caglar Soyuncu
Brendan Rodgers’ side have dropped ten points in the four games Wilfred Ndidi has missed through injury, losing two and drawing two, having dropped just 18 in the 21 he has played. Jamie Vardy has scored the vast majority of their goals but Kelechi Iheanacho has proved an able replacement when called upon. But Jonny Evans and Caglar Soyuncu have kept nine clean sheets this season – the second most in the Premier League.  With a goal and an assist each, it has become nigh on impossible to choose between them.

LIVERPOOL – Virgil van Dijk
An uncharacteristically poor performance against Atletico Madrid on Tuesday has drawn criticism from Ruud Gullit among others. But he is among the top three centre-backs the Premier League has ever seen (think I’ll avoid naming the other two). And possibly the most influential signing. Dejan Lovren, Joel Matip and Joe Gomez have all had successful stints at the back for Liverpool this season, but only because they are playing alongside Van Dijk. He should have won the Ballon d’Or.

MANCHESTER CITY – Kevin De Bruyne
He’s got 17 (seventeen) Premier League assists, already more than the top creator last season, Eden Hazard, had in his entire swansong campaign for Chelsea. On his day – which is most days – De Bruyne is the best player to watch in the division. His ability to find space is extraordinary and his right foot is as cultured as it is powerful. Add to that his dribbling expertise and work-rate, he is the one player Man City simply cannot afford to lose should the mass exodus following a European ban come to pass.

MANCHESTER UNITED – Bruno Fernandes
The £47million January signing is already Manchester United’s MVP, which is both a damning indictment of the quality of the rest of the squad and testament to the Portuguese playmaker’s ability. He was exactly what this United side needed: calm and assured on the ball, always looking forward rather than sideways or backwards, and the set-piece delivery Harry Maguire’s noggin has been yearning for all season.

NEWCASTLE – Martin Dubravka
Newcastle have scored a paltry 24 goals in the Premier League this season, just one more than Crystal Palace who are the least deadly in front of goal. And while they by no means have the most miserly defence in the division, any points they do win are in no small part down to Dubravka. He’s made the most saves in the Premier League (100) and has the sixth highest save percentage (71.2%).

NORWICH – Todd Cantwell
The 21-year-old is the creative heartbeat of the Canaries. Emiliano Buendia provides more key passes and is the assist king with seven, but Cantwell has the goal threat to go with his own technical prowess and eye for a pass. He’s scored a quarter of Norwich’s 24 Premier League goals this season and will not be short of Premier League suitors should Norwich take the now almost inevitable drop back to the Championship.

SHEFFIELD UNITED – Dean Henderson
Should be England’s number one and should perhaps take over from David De Gea at United. Only behind Alisson in terms of clean sheets (10:9) and save percentage (87:76), the 22-year-old has been a big factor in the Blades’ astonishing season.

SOUTHAMPTON – Danny Ings
Jurgen Klopp said of the former Liverpool striker as he left Anfield: “If you could bottle character and spirit, his would sell worldwide.” He’s scored 15 of Southampton’s 32 goals in the Premier League this season, and is the main reason for their incredible turnaround following the 9-0 defeat to Leicester. Can’t wait to see him score the winner for England at Wembley on July 12…

TOTTENHAM – Lucas Moura
The Brazilian is going to be run into the ground until the end of the season. With Harry Kane and Son Heung-min out, he’s now their only senior striking option. His form has been patchy at best, with just four Premier League goals and none in his last nine outings. Jose Mourinho will be desperate for the former PSG star to rekindle the magic of his semi-final Champions League hat-trick against Ajax last season.

WATFORD – Abdoulaye Doucoure
The Frenchman is a signing the Big Six would be foolish to ignore in the summer. The second top scorer (4) for Watford has been set free by Nigel Pearson, playing in a roaming role slightly further forward where he can affect the attack on a more regular basis.

Definitely the pick of the bunch 🚀 pic.twitter.com/6OfmgDo2p2

His solo goal against Bournemouth summed up his almost unique ability as a Premier League midfielder: the power to drive through the centre of the pitch having won the ball back inside his own half; the close control as defenders narrowed the space on the edge of the box; and the outstanding technical ability to take one final touch before firing past the helpless Mat Ryan.

WEST HAM – Lukasz Fabianski
Although the Hammers re-signed Darren Randolph in January as a proper back-up to Fabianski following Roberto’s laughably catastrophic spell in the side, Fabianski is the undoubted number one and has been West Ham’s best and most consistent player for the last two seasons. There’s been a slight dip in form surrounding his long-term injury, but he will pull his side out of numerous holes that his defence will dig for him before the end of the season.

WOLVES – Raul Jimenez
Wolves are chasing Europa League glory this campaign, and with Chelsea fluffing their lines and Man City facing a ban, they still have an outside chance of Champions League football next season. The goals and all-round excellence of Jimenez as a focal point for their attack is not only vital to their success this campaign, but may also decide whether his future remains at Molineux or elsewhere. Easily good enough to dine at the top table.