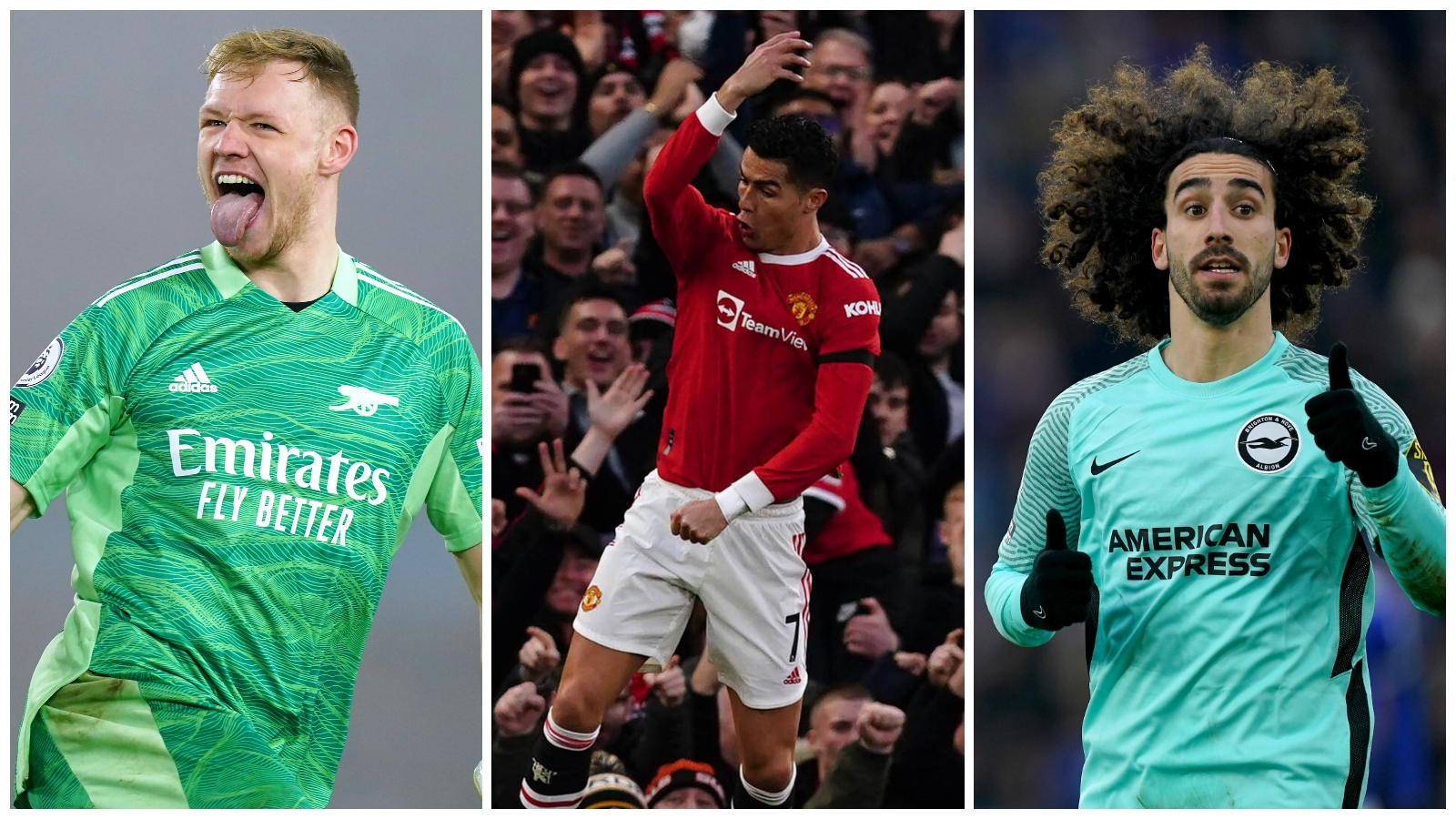 We have selected each Premier League club’s best signing of the 2021/22 season so far. All transfer fees are taken from Transfermarkt.

Arsenal – Aaron Ramsdale (£25m)
Starting off with the toughest decision out of the 20. Aaron Ramsdale’s signing certainly raised plenty of eyebrows in north London but he has been excellent since joining from Sheffield United last summer. Ramsdale has made some crucial saves this season and his ability to play with the ball at his feet has allowed Arsenal to play out from the back better than they ever have before.

Martin Odegaard has been superb under Mikel Arteta and was very close to getting in ahead of Ramsdale. Benjamin White and Takehiro Tomiyasu have also been very positive signings in what could end up being a superb season for the Gunners.

The Brazilian playmaker joined from Barcelona after a difficult spell in Catalonia and instantly hit the ground running in his Villa debut against Manchester United, contributing to both goals as Steven Gerrard’s side came from 2-0 down to draw.

Having scored four and assisted three in ten Premier League appearances so far, it is likely that the Midlands club will utilise their option to buy the former Liverpool man at the end of the season.

Brentford – Christian Eriksen (free)
Christian Eriksen has only played three games for Brentford since joining on a free transfer in January, but the 30-year-old’s comeback story is truly inspirational. Also, Eriksen is a huge name and head coach Thomas Frank was right to say the midfielder could be the Bees’ “best signing ever”.

More will come from Eriksen, who has provided one assist for Brentford. The 109-cap Denmark international has already been recalled for his country and the extra minutes can only be good for Frank, Eriksen and his teammates.

Brighton – Marc Cucurella (£16m)
Marc Cucurella has taken to the Premier League like a duck to water and has been a terrific asset for Brighton this term, operating as a marauding left wing-back. That £16m fee is looking like a bargain at this stage, with Chelsea already being linked with the Spanish international. Cucurella went straight into Brighton’s starting XI at the earliest opportunity and hasn’t been out of it since, completing 90 minutes in 23 of his 26 Premier League appearances.

Burnley – Maxwel Cornet (£13.5m)
Burnley broke their transfer record last summer to bring in Maxwel Cornet from Lyon. The Ivory Coast international was predominantly a left-back for the Ligue 1 side, with Sean Dyche signing him to play as part of his front two. Cornet hit the ground running as a striker, developing a nice partnership with Chris Wood. However, since the New Zealand target man left for Newcastle, Cornet has failed to find the back of the net for Burnley. If the Clarets are to avoid relegation, the 25-year-old will have to rediscover his scoring touch.

Chelsea – N/A
Harsh? Fair? We don’t care! To say that £100m Romelu Lukaku has been Chelsea’s best signing this season is a little bizarre, considering he has been nowhere near his best under Thomas Tuchel. Saul Niguez joined with a great reputation but looked lost in his first few months at Stamford Bridge. Minutes have been hard to come by for the Spaniard, who has started four Premier League games this campaign, being hooked at half-time in two of those.

The most expensive new recruit was Chelsea defender Marc Guehi, whose excellent form in 2021/22 earned him a call-up to the England squad for this month’s friendlies against Switzerland and the Ivory Coast. Michael Olise has looked terrific at Selhurst Park and will soon be similarly knocking on Gareth Southgate’s door. Having predicted the 19-year-old to be the biggest bargain of the season, it was slightly tempting to pick him ahead of Guehi…

Everton – Demarai Gray (£1.8m)
It has been a f**king terrible season for Everton – there’s no beating around the bush in that respect.

Demarai Gray has been a huge bargain, however, joining for a measly £1.8m from Bayer Leverkusen. The English winger hasn’t actually scored this year, but his early-season form is enough to avoid us giving another N/A.

Leeds – Jack Harrison (£11.5m)
Similar to Everton, it has been a rough campaign for Leeds. Harrison scored last week as the Whites came from 2-0 down to win 3-2 at Wolves. It was a huge result for Leeds, who have now won two in a row under Jesse Marsch. Harrison spent about eight seasons on loan at Elland Road before making his move permanent last summer. He’s not been great this but he has definitely been better than fellow summer signings Dan James and Junior Firpo. The latter has particularly struggled in the Premier League.

Leicester – Patson Daka (£27m)
Leicester splashed out £27m on Patson Daka, who is the long-term successor to legendary striker Jamie Vardy. The Zambia international hasn’t really had a fair crack of the whip this season, however, netting four times in 15 Premier League appearances. Despite his average league form, Daka scored five in Leicester’s Europa League group and has scored one in two in the Europa Conference League. He’s not been great by any stretch of the imagination, but he does not look like a flop either. He has shown some good signs that he can fill Vardy’s boots in a season or two.

Liverpool – Luis Diaz (£40m)
Luis Diaz looks the real deal and certainly a Liverpool and Jurgen Klopp forward. The Colombian has already made six starts in the Premier League, also playing 97 minutes in the penalty shootout victory over Chelsea in the Carabao Cup final. Liverpool essentially nabbing Diaz from Tottenham makes this transfer all the more worthy of being picked as the Reds’ signing of the season.

Manchester City – N/A
Another £100m man not living up to their price tag has resulted in another N/A.

Jack Grealish is a great player, but he has not looked it at Manchester City this season. In time, the England man will likely be as accomplished at City as Riyad Mahrez, but to say he has been the Citizens’ best signing this season just doesn’t sit right.

Manchester City and Spurs have run-in advantage over rivals

Manchester United – Cristiano Ronaldo (£13.5m)
A £13.5m fee for the most marketable footballer in the world? No brainer. Cristiano Ronaldo has received plenty of criticism for his on-pitch performances this season, but in reality, he is the club’s top scorer with 18 goals in 33 games. Without the Portuguese superstar, United wouldn’t have made it out of their Champions League group after he scored six in five.

Newcastle – Dan Burn (£13.5m)
January was a huge month for Newcastle. They made wise signings who have influenced their rise up the Premier League table.

Dan Burn has come in and steadied the ship at the back, forming a solid partnership with Swiss centre-half Fabian Schar. The pair kept a clean sheet in Burn’s debut against Aston Villa. The Magpies went unbeaten for five games with Burn and Schar in the heart of Eddie Howe’s defence.

Relegation is looking unlikely, which means the most exciting summer transfer window in Newcastle’s history is approaching.

Norwich – N/A
I know what you’re thinking, but no, Norwich did not sign a £100m flop. They signed a bunch of flops for under £10m instead.

Milot Rashica and Josh Sargent have both been poor and loan signings Ozan Kabak, Billy Gilmour and Brandon Williams don’t merit a place here with another relegation on the cards for the Canaries.

Southampton – Tino Livramento (£5m)
Perhaps the easiest decision of the lot. Tino Livramento has been superb for Southampton since joining last summer. The England Under-21 international has played 23 times in the Premier League this season. He has been very steady under Ralph Hasenhuttl and has looked like an experienced top-flight full-back.

Tottenham – Cristian Romero (loan)
Cristian Romero is already the best centre-half in the league according to many Spurs fans. He looks good – not that good – but he does look like a very promising defender. He technically joined on loan, but Spurs are going to make the deal permanent at the end of the season for a reported €50m plus add ons. Antonio Conte’s side are a lot better with Romero in the team and his form will be very important as the north Londoners look to beat arch-rivals Arsenal to fourth place.

Watford – Emmanuel Dennis (£3.6m)
Watford are in great danger of relegation, but without Emmanuel Dennis’ goals they’d be pretty much doomed by this stage. The Nigeria international has scored nine goals in the Premier League this season, winning the Hornets ten points with his goal contributions alone.

This was a very straightforward decision and £3.6m looks to be the bargain of the season. Here’s hoping Olise pulls his finger out.

West Ham – Craig Dawson (£2m)
Craig Dawson spent last season on loan at West Ham before making his move permanent for a measly £2m. The 31-year-old is one of the first names on David Moyes’ teamsheet with the Hammers battling to finish inside the top four. And he cost peanuts.

West Ham also signed Alex Kral and Alphonse Areola on loan and spent big money on Kurt Zouma and Nikola Vlasic. Zouma has been solid this season, but he kicked a cat, so I didn’t fancy picking him.

Wolves – Jose Sa (£7.2m)
We love Rayan Ait-Nouri here at F365, but Jose Sa deserves recognition for the season he’s having at Molineux.

Sa has set the tone at Wolves, who are usually very hard to beat. He has the third-most saves made in the Premier League this season with 99, only behind his lookalike David De Gea at Manchester United (105) and Leeds’ Illan Meslier (113).

The goalkeeper was another bargain at £7.2; Sa has quietly been one of the best signings of the season.