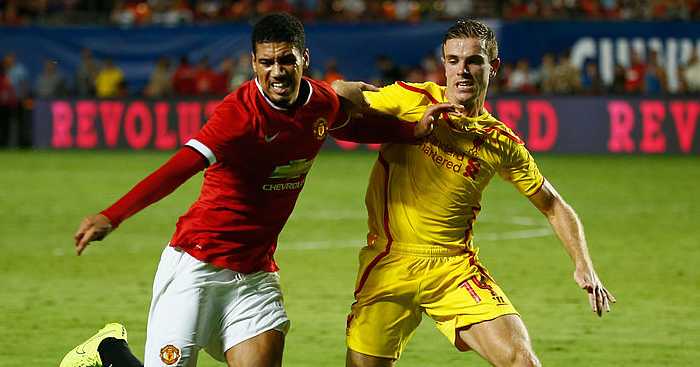 Those who are confirmed to be leaving this summer are not included.

1) Laurent Koscielny (July 2010)
Aaron Ramsey had a good two-year head start on his closest Arsenal teammate, but will leave the club in fine hands when he jets off to Turin.

2) Emiliano Martinez (August 2010)
And some people don’t think Arsenal have any dressing-room leaders.

3) Carl Jenkinson (June 2011)
Do you reckon he still has an Arsenal-themed bedroom?

1) Harry Arter (June 2010)
He has been linked with Fulham – perhaps rather lazily as he is married to Scott Parker’s sister – but Harry Arter will return from his Cardiff loan as Bournemouth’s longest-serving player after Marc Pugh’s exit.

2) Charlie Daniels (November 2011)
Depending on where Eddie Howe uses him, Lloyd Kelly has every chance of finally displacing Charlie Daniels as Bournemouth’s regular left-back next season.

3) Dale Stephens (January 2014)
With Bruno leaving after seven years by the sea, Dale Stephens feels like the perfect man to assume such an important mantle.

1) Kevin Long (January 2010)
Shane must be awfully proud of his brother.

1) Tomas Kalas (July 2010)
Matej Delac will be delighted. Tomas Kalas has played two Premier League games for Chelsea, the last of which came in May 2014.

2) Lucas Piazon (January 2012)
Matej Delac will be ecstatic. Lucas Piazon has played once in the Premier League for Chelsea, as a second-half substitute in December 2012.

3) Eden Hazard (June 2012)
He really has been there for bloody ages. How on earth do Chelsea go about replacing him?

1) Ryan Inniss (June 2011)
With Julian Speroni leaving Selhurst Park after 14 years this summer, and Jonny Williams having departed earlier this year, 23-year-old Ryan Inniss and his one League Cup appearance for Crystal Palace is in charge.

1) Phil Jagielka (July 2007)
His contract expires this summer and an extension may yet be in the offing. Everton have outgrown him on the pitch, but what about off it?

3) Seamus Coleman (January 2009)
David Moyes has never spent £40,000 more wisely, except when he booked a helicopter that one time.

1) Andy King (May 2007)
The first player to win England’s top three divisions with the same team in the Premier League era is no longer even the most famous Andy King. Bloody Fyre Festival.

3) Wes Morgan (January 2012)
Against all odds, Nigel Pearson’s second Leicester signing – Danny Drinkwater was his first – is still knocking about in the East Midlands.

1) Jordan Henderson (June 2011)
He might have had “the most difficult job in the last 500 years of football,” but Jordan Henderson remains the only current Liverpool player to win a trophy while at the club.

Daniel Sturridge (January 2013)
It seems likely Daniel Sturridge will leave when his contract expires this summer. If so, the Champions League final could probably do with a wavey-armed celebration at some point.

Simon Mignolet (June 2013)
It seems likely Simon Mignolet will leave, even though his contract doesn’t expire until 2021. Adam Lallana (July 2014), Dejan Lovren (July 2014) and, quite hilariously, Alberto Moreno (August 2014) are next in line.

3) Fernandinho (July 2013)
He has come a long way since having to choose a different squad number because James Milner was already wearing the No. 7 shirt when he signed.

1) Chris Smalling (July 2010)
Throw in the fact that he’s replacing Antonio Valencia, and it quite neatly encapsulates one of Manchester United’s biggest self-inflicted problems.

1) Paul Dummett (July 2010)
“I don’t think you’ve what it takes to play in my team,'” Paul Dummett recalls hearing from Alan Pardew upon his return from a loan at St Mirren in summer 2013. Six years on, he is a homegrown Newcastle hero and first-team regular, while Pardew is downing pineapple juice between punditry gigs.

3) Rolando Aarons (April 2014)
With two years left on his Newcastle contract, Rolando Aarons still has every chance of being sent out on loan more often by Rafael Benitez (three times) than he has appeared in the Premier League under him (six times).

1) Alexander Tettey (August 2012)
Only one current Norwich player can profess to having played a part in both of their previous Premier League seasons, scored a winner at Old Trafford and netted a Goal of the Season contender. And it ain’t Grant Hanley.

2) Louis Thompson (September 2014)
To be given your professional first-team debut by Paolo Di Canio must be a uniquely terrifying experience. Louis Thompson was signed by Neil Adams long after his Swindon bow.

3) Timm Klose (January 2016)
The three-and-a-half-year contract Timm Klose signed with Norwich midway through their most recent Premier League season will expire this summer.

2) Kieron Freeman (January 2015)
So too does Kieron Freeman, who might forever be the only player to feature for all three professional Nottinghamshire clubs in consecutive games. He played for Mansfield on New Year’s Day 2012, started for Nottingham Forest in the FA Cup six days later, then for Notts County on an emergency loan a week after that. Lovely.

3) Billy Sharp (July 2015)
With Paul Coutts one of five players released by the Blades this summer, Billy Sharp takes his place on the podium. Who else remembers the only two Premier League appearances of his career, for Southampton in defeats to Manchester City and Wigan in August 2013?

1) James Ward-Prowse (October 2011)
You know how everyone still calls Jesse Lingard one of Manchester United’s ‘kids’? He’s 26 and 239 career appearances for club and country. James Ward-Prowse is 24 and has played 235 times for Southampton alone.

2) Maya Yoshida (August 2012)
Steven Davis was the only other survivor from those Southampton signed in their first summer back in the Premier League. He has permanently sodded off to Rangers, leaving Maya Yoshida to fend for himself.

3) Fraser Forster (August 2014)
He has conceded eight goals in his last two Southampton games, spanning a 16-month spell during which he earned just under £5m. And that unfathomable contract still has three years left to run.

1) Danny Rose (July 2007)
How strange is it to think that a Martin Jol signing is a first-team regular at Tottenham 12 years on?

3) Jan Vertonghen
And now to a player who rejected Arsenal. It’s difficult to say he got that decision wrong, really.

2) Tommie Hoban (May 2011)
He has never made a single Premier League appearance for Watford, is 25, missed the end of the season with a serious knee injury, and has a contract that expires this summer. Goodbye.

1) Mark Noble (August 2004)
When Julian Speroni’s watch has ended, Mark Noble will be the Premier League’s current longest-serving player. He is the hero none of us deserve.

3) Andy Carroll (August 2012)
The scorer of the last ever overhead kick with effortless grace and poise has not netted in the Premier League for West Ham since April 2018. Bloody ballerina injuries. But he did captain them against Manchester City in February.

2) Ethan Ebanks-Landell (December 2010)
Ethan Ebanks-Landell has enjoyed no such fortune. He was actually born in the same calendar year as Doherty but has failed to establish himself under Mick McCarthy, Terry Connor, Stale Solbakken, Saunders, Kenny Jackett, Walter Zenga, Paul Lambert and now Nuno. He ended the season on loan at Rochdale.

3) Conor Coady (July 2015)
For all their new-found riches and enviable contacts, the £2m Wolves spent to sign Conor Coady from Huddersfield remains one of their finest recent purchases.