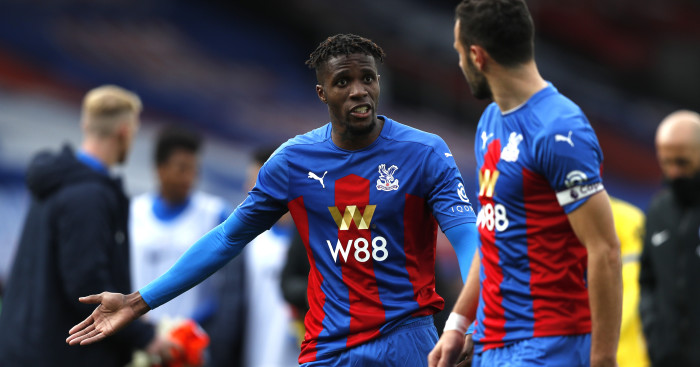 That they very nearly got away with it, and would’ve done had Joel Ward not seen a 90th-minute long ball arc gently towards his left foot and thought ‘Ah, this looks like a job for my trusty right boot’, should not excuse Crystal Palace’s almost total absence of attacking ambition in a 1-1 draw against a Brighton team that had lost three of their first four games this season.

The visitors had been by far the better side until Palace were handed the opening goal by a combination of the one moment of attacking quality they produced, through Andros Townsend’s run and whipped cross from the right, a slight lapse of judgement from Tariq Lamptey, who got the wrong side of Michy Batshuayi and very, very gently manhandled him, and a referee who decided that constituted a penalty.

If you give that as a penalty then you have to give 20 a game. Which, come to think of it, they are actually doing this season so fair enough

It was without doubt one of those decisions that exists in the vast hinterland of Schrodinger’s Penalties that would never be awarded by VAR but also won’t be scrubbed off by it either.

The goal rocked Brighton out of their early rhythm, and it took them until well into the second half to get it back. Yet it would be quite wrong to suggest it helped Palace kick on. They hadn’t managed a single attempt on goal before the penalty, and didn’t have another after it.

Whatever your views on the merits of xG, you have to admit that a total of quite literally 0.0 (+ 1 pen) is quite something, at home, against a bitter rival.

It was not a great game, and for much of it the story looked like being Brighton failing to turn their territory, possession and countless chances created into a tangible result.

Instead, while Brighton will probably still feel they left with the very, very least they deserved, Palace will now ask themselves whether they truly gave themselves the very best chance.

Yes, this is a Palace team built on first being hard to beat; but one way of being hard to beat is to score some goals. It really can help. Brighton, for all their neatness and tidiness are not a team that should be able to pin back a Premier League rival to this extent.

That’s not to say the second half had nothing to recommend it before the late equaliser and Lewis Dunk committing the most pointless two-footer in recorded history. There was a clash between Lamptey and Tyrick Mitchell that would surely have earned the latter a booking had he not already received one. Instead, it was a stern ticking-off all round. Luckily, everyone was in agreement that this was one of the times when all we want is common sense rather than all we want being consistency, and thus there was no controversy.

There was also a time when the corner flag kept the ball in play, which is always exciting, and the clock also ticked over to 100 minutes thanks to Dunk’s antics. A couple of niche football moments there to reward those who recognise what the game is truly about while simpler folk crave such humdrum fare as “chances” or “goals”.

The other highlight was Michy Batshuayi’s disallowed effort early in the second half. First, because it was just nice to see Crystal Palace try another attack even if the Belgian’s fine yet futile finish wasn’t enough to convince them to consider trying another for the remaining 40-odd minutes.

But more importantly, it was perhaps the high/low point in the Fake Crowd Noise that has been the single greatest thing about Covid football and yet still remains unloved by bafflingly large numbers of absolute heathens.

As Batshuayi’s finish flashed into the roof of the net and along the back of it, the ‘near miss’ button was initially pressed. This was a wonderful subversion of how traditional live crowds view the game, with half the Fake Crowd thinking that it hadn’t gone in. Just as the ‘goal celebration’ button was pushed, up went the offside flag. The knowledgeable Fake Crowd had, it turned out, been ahead of the game.

Luckily for everyone, any controversy was once again avoided as the Stockley Park set-square showed Batshuayi to be offside by just enough to cross the invisible and movable yet immensely powerful barrier between controversial and palatable, and on we all went watching Brighton create and spurn chance after chance right up until the moment they didn’t.