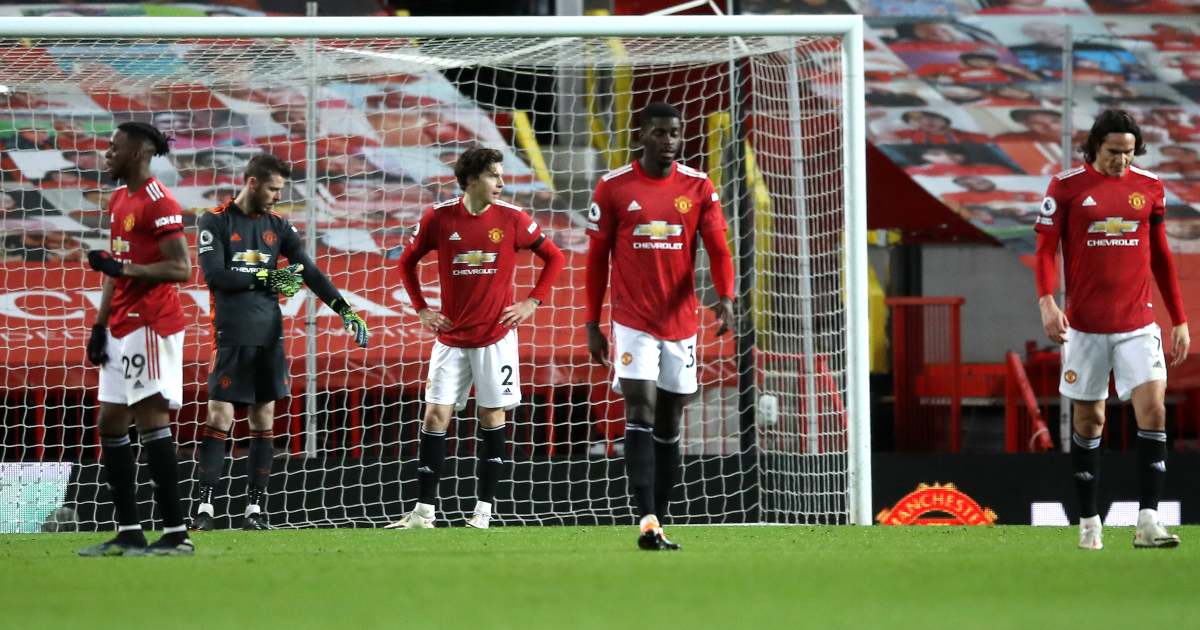 There, if we needed them, were all the reasons why Manchester United could win the Premier League title. And yet further evidence why they absolutely won’t.

Ole Gunnar Solskjaer’s forward line was too hot for Everton to handle at Old Trafford but his rearguard once more folded in the face of the Toffees’ counter threat. It was 90 minutes which encapsulated United’s prospects: their attackers will continue to win them matches; their defence will cost them a shot at this league title.

Three shipped to Everton takes United’s tally of goals conceded to 30. That is more than any other team in the top half of the table. Even down towards the relegation zone, Burnley have conceded fewer and Brighton can match United’s defensive record.

That, ultimately, is down to poor judgement rather than bad luck. United weren’t undone by Everton. They shot themselves in the foot. Three times.

Everton’s first goal was a goalkeeping error. Their second was a defensive shambles. Their third, almost with the last kick of the game, was a horrifying combination of both.

For United fans, it was desperately hard to watch. For their strikers, it must be infuriating.

Because the Red Devils deserved to win. Once they had got to grips with Everton’s shape – a diamond midfield with split strikers – they quickly began unpicking it. United led 2-0 at half-time thanks to Edinson Cavani’s splendid header, teed up by Marcus Rashford’s devilish delivery, and Bruno Fernandes’ latest stroke of genius.

Even after being pegged back within seven minutes of the restart, United continued to threaten the Toffees goal. They regained the lead through Scott McTominay’s header, which may have owed much to Robin Olsen’s slip but with the front four demonstrating balance and potency, United were a constant threat.

A stunner of a strike. pic.twitter.com/CmLHIkrMgP

Frustratingly for Cavani, Fernandes, Rashford and Mason Greenwood, despite looking likely to score at any point, United’s foundations also appear set to cave in at any moment.

Much to Carlo Ancelotti’s chagrin, Everton didn’t test their hosts until after the manager had reminded them, forcibly we assume, of their instructions at half-time. The plan was clear from kick-off: feed Dominic Calvert-Lewin and Richarlison in the channels either side of United’s centre-halves and watch them squirm.

The forwards kept their end of the bargain in the first half by making their runs off Harry Maguire and Victor Lindelof but their Everton team-mates forget to give them the ball. And it wasn’t as if they were expecting passes through the eye of the needle. Anything tossed down the inside channels would have sufficed, but seemingly every time, James Rodriguez, Abdoulaye Doucoure, Tom Davies and Andre Gomes passed up the responsibility.

When Davies finally slid a ball behind Maguire four minutes after the break, Calvert-Lewin was in. Maguire recovered his ground so as to offer his England team-mate only an avenue into David De Gea’s gloves, but with the United keeper in his current form, that’s all Everton needed. A fumble and a Doucoure tap-in later, Everton’s deficit was halved.

De Gea can’t be blamed for Everton’s first equaliser. Neither of his full-backs closed down balls into the box, the first of which enticed both centre-halves yet neither dealt with it. Fred called Doucoure’s pass into James but failed to intercept it and from there, the Colombia star was given the freedom of the box to fire into De Gea’s bottom corner.

With the clock ticking towards 90 minutes, United opted to defend what they had, which is always a dangerous policy for a team so poor at defending anything. Only their finishing stopped Burnley and Fulham from achieving parity late on as United held on to slender leads recently at Turf Moor and Craven Cottage. Solskjaer threw on Axel Tuanzebe in added time to shore things up. Instead, the substitute’s only contribution was to dive in for the concession of a free-kick just inside United’s half.

Solskjaer, quite rightly, described the delivery as a ‘long thump upfield’ but even that was too sophisticated for United to suss. Wan-Bissaka appeared to duck the first header when Michael Keane did not. By that time, Maguire had broken his own defensive line to play every Everton player including their goalkeeper onside, and with United’s defence statuesque aside from their retreating captain, the ball dropped to Calvert-Lewin.

Maguire’s just decided to be in his own line and play them all onside.. pic.twitter.com/rtKYuSFNom

Even then, there seemed a chance to avert the danger. Calvert-Lewin’s touch took him into De Gea’s territory, but the United keeper surrendered it without a fight. Rather than springing from his line to throw his hands and head towards the ball, or spread and smother, De Gea stood small while seemingly more concerned about swerving Calvert-Lewin’s momentum.

If, individually and collectively, it was a one-off then Solskjaer could write it off as a bad night and go again in midweek against West Ham in the FA Cup. But, as their defensive record suggests, this capitulation was a symptom of greater ills.

As Ancelotti identified, United are a pacy centre-back short, especially while Eric Bailly maintains his hobby of treading on rakes. And behind the defence, De Gea’s bravery seems to be waining with his saves percentage. Only three other first-choice keepers have kept out a lower proportion of the shots they have faced.

Presumably Dean Henderson will come in for the FA Cup clash with West Ham in midweek and De Gea has been fortunate that the England keeper so far hasn’t seized his opportunities when they have come this term. However, if Henderson sharpens up against the Hammers then De Gea can’t argue if he remains on the bench for the trip to West Brom next Sunday.

Solskjaer said after the full-time whistle that United “aren’t talking about the title”, which is perhaps an attempt to deflect the pressure away from his squad. Or he too recognises that this defence, in its current form, is too flimsy to sustain the Red Devils’ ascent back to where they feel they belong.