Home Winners & Losers F365’s early losers: Anyone taking the Mik out of Arteta 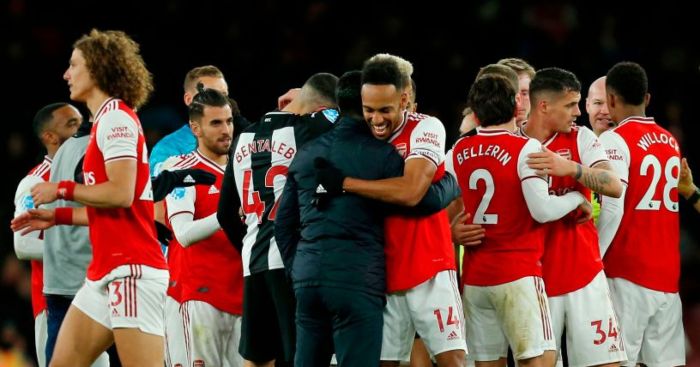 It took a game half-finished to reveal an entire stadium of glasses half-empty. Arsenal had more than twice as many shots as Newcastle and over two-thirds of the possession by the time Lee Mason lulled north London out of its collective coma for half-time, but the game had undeniably followed a script the visitors had written.

Newcastle came for a point and were on course to secure it. In between bursts of brilliance from Allan Saint-Maximin, they restricted Arsenal with ease and thrived off the shared frustration.

Every feeble counter-attack was met with an Emirates groan. Any errant pass received scrutiny instead of support. The slightest missteps added weight to the growing argument that any suggestion of improvement under Mikel Arteta was simply a placebo effect that was rapidly wearing off.

But perspectives can change in an instant. One league win in nine became one defeat in 11 at the end of a half-hour spell the hosts delighted and dominated.

From the 30th minute to the 60th, Arsenal had ten shots to one, five on target to zero, scored through Pierre-Emerick Aubameyang and Nicolas Pepe, hit the crossbar through Eddie Nketiah and misplaced 11 of 207 passes. They shifted through the gears, Mesut Ozil on the accelerator; Newcastle predictably stalled.

Their first two goals were scored within three minutes of one another and their last two in the space of a five-minute encore. Four different scorers shared one mutual victim.

The move which ended up with Ozil (offside) setting up Aubameyang seemed like even more passes in the build-up #ArtetaBall https://t.co/xR1AViUsDg

And thus the story of a team making limited progress had its entire narrative restructured. Arteta is not fickle enough to judge a tenure on one result or performance, but he needed this to quieten the noise.

Not since that Daily Telegraph cartoonist’s wage was revealed had drawing been quite so polarising. One or two stalemates are acceptable: signs of a feeble team developing something of a resolve. Three or four start to tip the scales away from praising a team for being hard to beat to criticising them for being unable to win. Six in a novice manager’s first eight Premier League games begins to define him as someone who cannot quite strike a balance between fixing a woeful defence and helping a disjointed attack.

Arsenal’s first league win by at least three goals with a clean sheet since Arsene Wenger’s final home game is an emphatic response.

Luke Shaw can be forgiven for his naivety. His belief that Arsenal’s struggles this season have been “hardly mentioned” was the claim of someone living in a Manchester United bubble, blind and deaf to the outside world. The Gunners have been derided and dismissed both from within and afar. No club changes a manager without a groundswell of opposition having already formed.

But it was a sentiment that was starting to be echoed: by rival supporters; by a dismissive media; by those whose turf he was muddying.

This, finally, was proof of development that, for some, has to be seen in the statistics to be believed. Arsenal have earned more points than Chelsea, Leicester, Manchester United and Wolves since Arteta was appointed, scoring more goals than Tottenham and conceding fewer than all but Liverpool.

By full-time, glasses were half-full and critics conspicuous by their silence. This was a statement victory: not proof of a specific destination, but evidence enough that the journey is worth investing in.