Home F365 Features Early losers: Ancelotti, Real Madrid and ultimately all of us 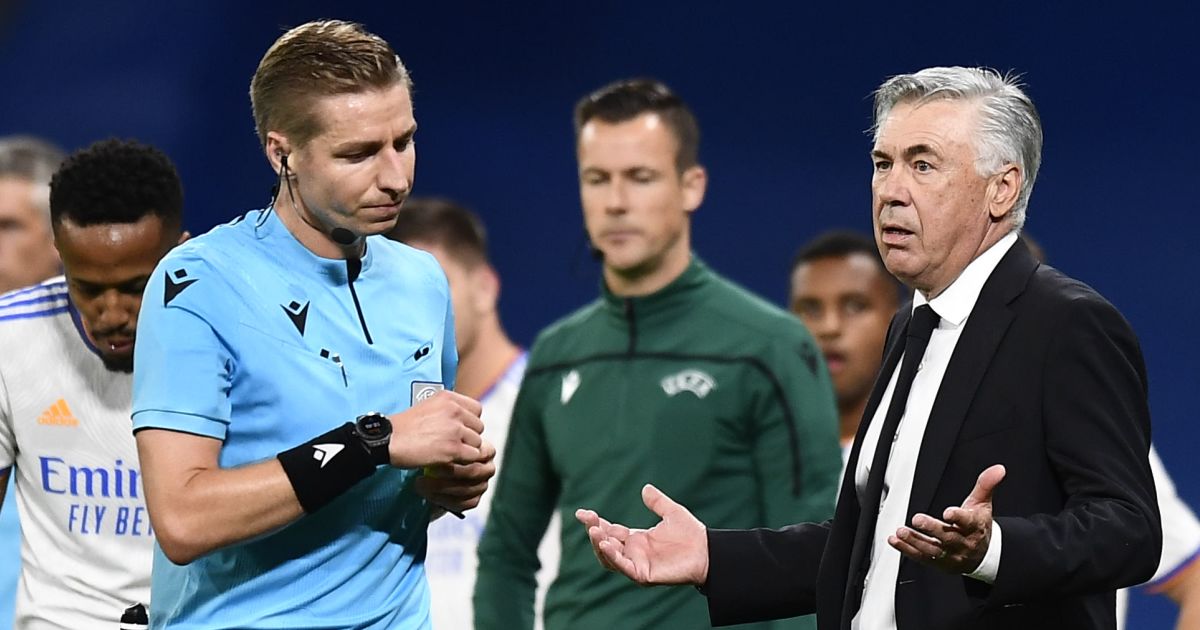 “Everything went well for them while everything we did turned out badly.”

Perhaps the only thing that went well for Real Madrid in their astonishing 2-1 Champions League defeat to Sheriff Tiraspol was Carlo Ancelotti’s unimprovably accurate and succinct description as the Big Cup’s most successful ever side crashed to a humiliating defeat against a team from a place that doesn’t officially exist.

It was, in many ways, a truly absurd game of football. While it is a textbook example of a shockwave-sending result, as a one-off game you could really draw few conclusions about either side.

Madrid were utterly dominant for almost the entire 90 minutes but encountered a goalkeeping display for the ages from Sheriff’s Georgios Athanasiadis, who combined skill with determination and a hard-earned dollop of dumb luck as a string of miracle saves kept your Hazards and Vinicius Juniors and Karim Benzemas of this world at bay, while the resulting loose ball always somehow managed to run safe or give a retreating Sheriff defender time to make a block. Athanasiadis continued this nonsense even after Benzema had slammed home a rather generous VAR penalty, most memorably denying Luka Modric with his face from close range.

Having taken the lead with a rare but beautifully worked attack in the first half and then spent the last 25 minutes of the game apparently clinging on for a famous point, Luxembourg international Sebastien Thill then slammed home an absurd last-minute half-volley to complete the smashiest of grabs.

Of course, there will be no sympathy for the 13-time champions losing in such fashion, as there never should be. Talk of Sheriff’s own vast wealth and dominance of their own domestic football, where they represent Moldova in name only with Tiraspol itself to be geographically if unofficially found in neighbouring Transnistria, can also wait; however big a fish they may be in their own small pond (and they’ve won 19 of the last 21 Moldovan titles) they are still a teeny tiny thing compared to Real Madrid. It is an astonishing result, and a deeply embarrassing one for a club that has started to have a few more of these occasions in a competition which they had until a few short years ago almost annexed.

Ancelotti is a sensible man and will not panic; he knows this was a freak result. But the reaction from elsewhere in the club and outside it is unlikely to be sanguine. It may be the first defeat of Ancelotti’s second spell in charge, but it is still one that heaps instant pressure on manager and team alike. You just can’t be losing these games when you’re Real Madrid, no matter how wild the ride.

But the other big loser from is absolutely everyone. That’s the problem with European football right now. Even a result that should delight with its reminder that anything can and will happen, that the hottest of favourites can fall, that the most dominant of teams can be beaten, now has the opposite effect.

As fans gleefully wrote their ‘LOL, so much for the Super League, ReLOL Madrid!’ social media posts, the schadenfreude dripping from the screen, it was impossible to ignore the fact that nights like these bring the Super League (or something much like it) closer to reality.

This result, the sort of giant-killing you and we all love to see and that makes football and sport itself worthwhile, is precisely the sort of outlier the Super League seeks to remove.

Therein lies the current paradox that dominates the current Champions League; any result that shocks the system and enlivens the often moribund group stage only hastens the arrival of something far, far worse.

We are not allowed to have nice things.