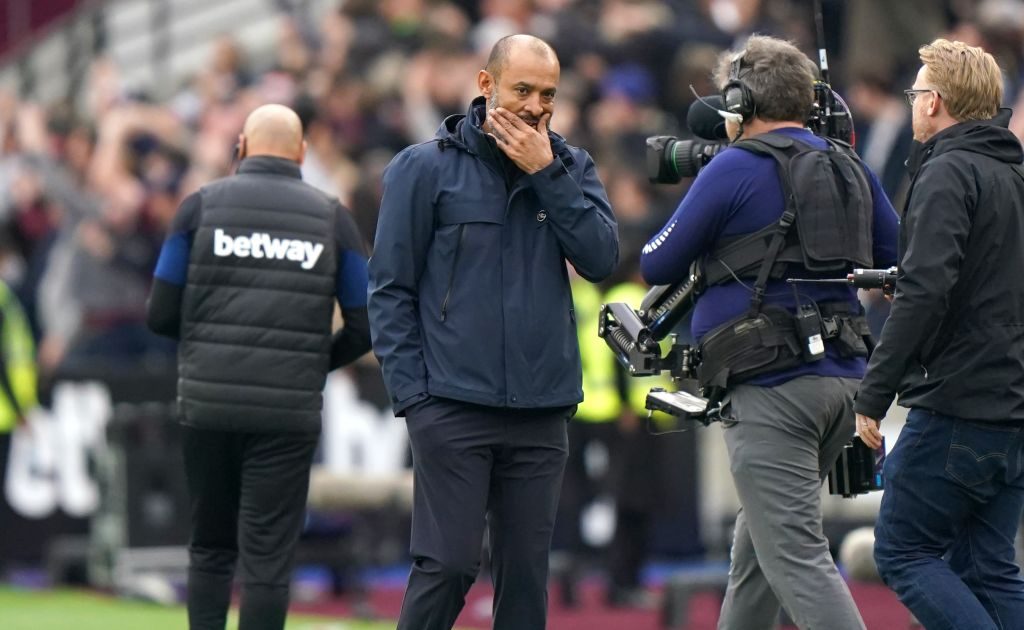 When Spurs and West Ham meet in what is frequently one of the louder, more competitive and most importantly batsh*t daft second-level Premier League derbies, there will always be delirium for the winners and angry recrimination for the losers.

This time, though, it’s hard to avoid the notion that both emotions will be heightened by the way events transpired at the London Stadium.

It’s not particularly controversial to say that for most of their recent histories, Tottenham have been a better football team than West Ham. Spurs were for a while a very good football team indeed, but even when they haven’t been that, they have usually been better than West Ham on the whole. League tables tell us as much. Sure, West Ham have had their moments in one-off games against opponents they despise above all others. But never anything sustained.

Right now, though, West Ham are a better football team than Spurs and have a better manager too. These are heady days for West Ham fans and dispiriting ones for Spurs.

But what should truly delight Hammers fans about today – and conversely have Spurs fans feeling pretty grim – is this: West Ham did not play particularly well today. More than that, Spurs played about as well as they can at the moment. Most recent West Ham success against Spurs has had the feel of a club and its team and its supporters raising their game for a “cup final”, for a game that means more to them than to their rivals. This was not that at all. West Ham were nowhere near their fluent best and offered little open play as an attacking threat. What they were, though, is organised and disciplined and solid and competent. For this West Ham team against this Spurs team, even when it’s playing reasonably well, that will as often as not be enough.

The nature of the Hammers’ winning goal was if anything a little too on the nose in summing up the spot both these sides currently occupy. Spurs have a defence that remains an accident waiting to happen, those August clean sheets proving now to be the cruellest of deceptions, while West Ham are a known and potent threat from set-pieces. Particularly Aaron Cresswell’s delivery, and particularly Michail Antonio’s finishing.

So for West Ham, who started the game at a hundred miles an hour but spent most of the next hour holding Spurs at arm’s length with varying degrees of ease, to score from a Cresswell corner that was horrendously defended by Harry Kane and given away in the first place by an inexplicable lapse in judgement from Sergio Reguilon was so apt it almost feels like a hack move to dwell on it.

But what choice do we have? Especially when confronted with the fact that a Spurs side containing the attacking talents of Kane and Heung-Min Son and Lucas Moura and Tanguy Ndombele could not muster a single shot – never mind one on target – in the entire second half? The final 21 minutes, including stoppages, of a derby game passed with Spurs 1-0 down and not managing a single shot of any kind. The substitutions when they eventually came from Nuno felt desperate. Giovani Lo Celso and Bryan Gil and eventually Steven Bergwijn were all chucked on to the pitch, but while all are talented players capable of altering the course of a game there appeared no plan or strategy beyond, you know, doing that, if you can, somehow.

It would be wrong to suggest Spurs did absolutely nothing in the second half after a first half they probably just shaded, with a couple of promising counter-attacks coming to nothing at the final ball with Kane and Ndombele in particular guilty.

Yet nothing feels like the operative word for Spurs. There is a nothingness to them which threatens to consume them. In a way, it’s more damaging than Mourinho’s more overtly antagonistic and destructive nihilism. Nuno Espirito Santo just isn’t a poisonous enough influence to have that same dramatic negative impact as Mourinho, but in a way that just makes it all the more pernicious.

Getting another defensive manager – albeit a far more personable one – after Mourinho was a clanging, egregious error. That it appears to have been mandated by new director of football Fabio Paratici doesn’t get Daniel Levy or anyone else at Spurs off the hook either, because nobody forced them to appoint Paratici.

There was a glimpse of what could be possible for this Spurs squad during Ryan Mason’s short caretaker spell at the end of last season. He made plenty of mistakes and was never really in contention for the full-time job and rightly so, but he ticked more of the boxes that Levy earmarked in his infamous “DNA” statement. Mason’s Spurs at least played with some attacking thrust and poise and a bit of pace and purpose. And the results weren’t bad.

It was possible in Mason’s Spurs to see the potential for, say, Erik Ten Hag’s Spurs or Graham Potter’s Spurs. Both attainable and realistic summer targets had Spurs known what they wanted and acted more decisively. This squad still has much to recommend it, but at the moment there is a gnawing sense of nothingness at the heart of it all.

Spurs are a team waiting for something to change. Under a manager less publicity hungry and egomaniacal than his predecessor, Spurs won’t have a crisis that hits the same critical mass. They will win enough games to muddle through because they still have better players than most other teams in this division. They’ve got 15 points from nine games playing meh football in a meh fashion, and will probably continue to accrue points at about that rate. But, really, what does any of it achieve? Spurs are in stasis, a state of suspended animation that may only come to an end if and when either Nuno’s mediocrity becomes too embarrassing for Levy to stomach any longer or PSG sack Mauricio Pochettino.

In years to come, people will compare the Nuno era at Spurs to George Clooney’s stint as Batman. Easier just to forget it happened.

Does anyone, up to and including the man himself, really look at how things are going and think Nuno is going to be a huge success at Spurs. Does anyone even know what would constitute success? On the one hand it’s outlandishly early to pass judgement, on the other it’s hard to see what he’s going to change. The defence is less timid and scared of itself than under Mourinho, but it’s still not great, and the attack is too often one-paced, that one pace being slow. Like Ole Gunnar Solskjaer’s United but on a slightly lower level, Spurs look a side waiting for one of their clever players to do something clever rather than a team with a coherent, reliably and consistently effective plan under a manager feeling sure of himself and his role and his methods.

For evidence of that this afternoon at the London Stadium, you had to look towards the home side and the home dugout.