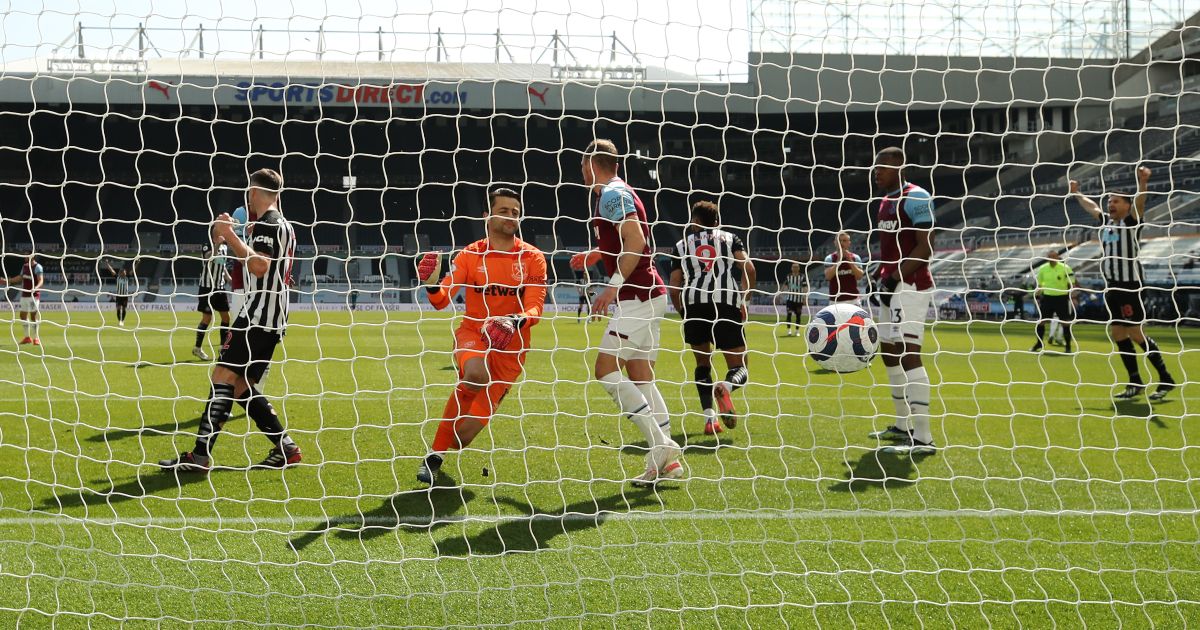 David Moyes guided Everton to a top-four finish back in 2005 and he could very well do it again this season at West Ham – but his players must avoid the self-destruction witnessed at St James Park on Saturday to make a go of it.

West Ham came into the game against Newcastle United on Saturday having lost only once all season to a non ‘big six’ side. That club? Newcastle United of course. The return to fitness of Allan Saint-Maximin and Callum Wilson – with the latter settling for a place on the bench – gave the Magpies hope that they may not have had if they’d faced Moyes’ high-flying Hammers a few weeks ago. Saint-Maximin came back from injury last Sunday to star in an incredible nine-minute sh*tstorm as Newcastle came from behind to beat Burnley.

And it was the Chatenay-Malabry-born Frenchman who caused most of the early panic in the West Ham backline during a poor first-half from the Hammers. It was the sense of anxiety in their defence which allowed Newcastle to take the lead. Craig Dawson flew out of defence to upend Joelinton in midfield on 36 minutes but the referee played on, with Saint-Maximin running at their vulnerable defence. It wasn’t the brilliance of the former Nice winger that saw the ball land in the back of the net, rather Issa Diop and Lukasz Fabianski getting in each other’s way. Fabianski’s dive to stop Saint-Maximin’s weak effort put off Diop, who somehow got the ball lost in between his feet, helping the ball trickle into the net. It was a fine mess and the referee added insult to injury by showing Dawson his second yellow card for the earlier tackle.

4 – Via Issa Diop, West Ham registered their fourth own-goal in the Premier League this season, more than any other side. Oops. pic.twitter.com/Fho3gykI07

Surely their individual errors were out of the way for the day? Nope. Fabianski, normally so impressive for West Ham this season, fluffed a simple catch under absolutely no pressure from a corner kick. The Poland international made it look like he was holding a soapy balloon as he dropped the ball right at the feet of Joelinton, who gleefully gobbled up the chance to double Newcastle’s deserved lead. It was a flashback to his days at Arsenal where some Gunners fans  – and John Cross – rather cruelly nicknamed him ‘Flapianski’. Despite Arsene Wenger repeatedly defending his goalkeeper, the tag stuck and he never managed to cement his place as number at the Emirates Stadium during his seven years at the club.

2 – Two of Joelinton’s five Premier League goals for Newcastle have come in his last three appearances in the competition (64 apps in total). Mojo. pic.twitter.com/Iida2sk25w

Fabianski has improved immeasurably as a goalkeeper since then, keeping nine clean sheets this season and signing a new deal recently to keep him at the London Stadium until the summer of 2022. During his time at West Ham, former manager Manuel Pellegrini even labelled the 35-year-old the “best goalkeeper in the league” after one particular performance against Manchester United in 2019. Former England international Paul Robinson also showered Fabianski with praise at the end of last month after signing a new deal, claiming the Hammers saved “tens of millions” of pounds by keeping him around.

Will his fumble against Newcastle cost them tens of millions in lost Champions League revenue? It could be a pivotal moment in West Ham’s season but they may not have been in their current position if it hadn’t been for Fabianski.

He could do little about Joe Willock’s headed winner for Newcastle after the Hammers had staged a ten-man second-half fight back, thanks to a Diop header and a Jesse Lingard penalty. The defeat leaves Moyes’ men in fourth place and hoping that results go their way when sixth-placed Liverpool face Leeds United on Monday and fifth-placed Chelsea host Brighton on Tuesday.

It’s hard to argue with Steve Bruce’s assertion before the match that Moyes should be “manager of the year” with nobody expecting West Ham to be in this position. There is no doubt, though, that Moyes will be hurting from losing due to two dreadful mistakes at the back, especially when the Hammers are more than capable of holding onto one of those top four positions. That is now ten goals conceded in their last four matches, which will be a concern. An injury to Lingard will be just as worrying as he hobbled off late on. West Ham still have a great chance of bringing Champions League football to east London next season but they must avoid any further slip-ups.