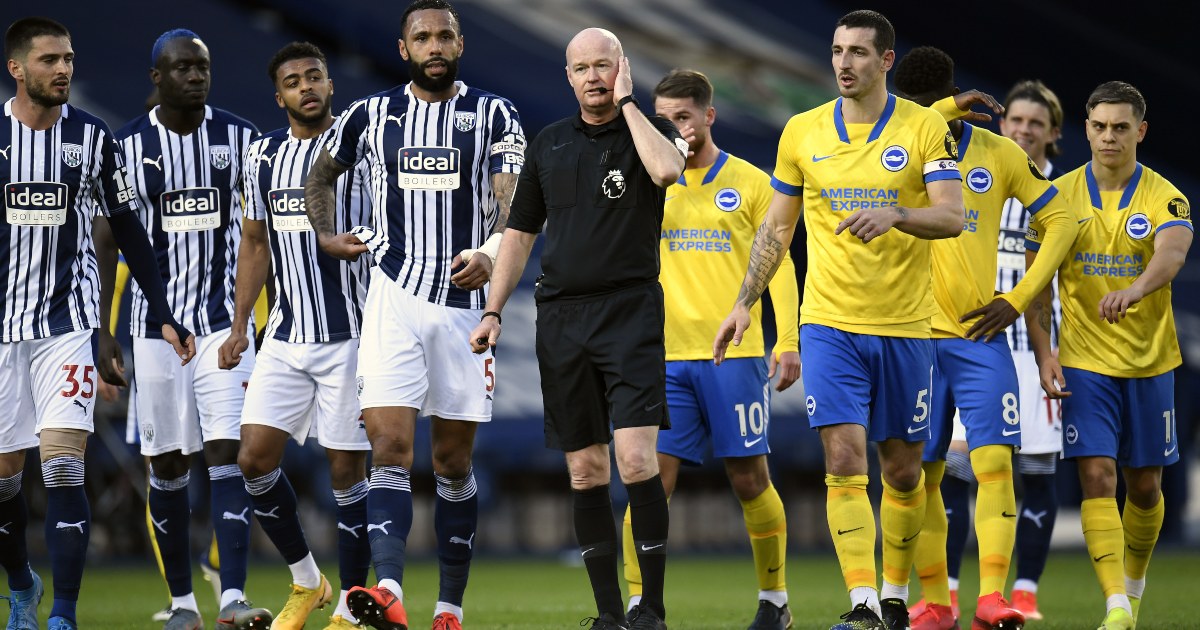 Southampton don’t want Lee Mason involved in their games. Nuno would doubtless prefer the official has nothing to do with Wolves’ either. And you can bet Brighton will be requesting a break from the Bolton whistle-blower after their 1-0 defeat at West Brom.

The Seagulls were the victims of Mason’s latest blunder, one that had to be seen – or heard – to be believed.

After conceding an 11th-minute opener to Kyle Bartley, Brighton thought they had levelled at The Hawthorns when Lewis Dunk curled in a quick free-kick.

Mason blew his whistle before hurriedly blowing again in a panic. But by the time the second blast was heard, Dunk had taken a goal-bound shot, with Sam Johnstone stranded.

Mason disallowed the goal, then re-allowed it, before reversing his decision one more time in perhaps the most chaotic scenes of this most barmy of Premier League seasons.

It was hard not to feel sorry for Mason. The official clearly recognised that he had screwed up and his panicked attempts to dig a way out of his latest hole were hard to watch for anyone not named Big Sam.

But this was a calamitous f*** up, one which in isolation could be put down to a moment of ill-judgement. A mishap. But as the latest in a series of catastrof***s, the evidence is mounting that Nuno had a point.

Lewis Dunk takes a quick free-kick and bends the ball into the net but after consulting the VAR, referee Lee Mason has overturned the goal because the whistle had been blown a second time before the ball had crossed the line

The Premier League attempted to stand by their man in the immediate aftermath, though Brighton may even take issue with the official explanation over why the kick was taken again. Having watched and listened for the second whistle at least 427 times, it seems impossible to say for certain that the ball wasn’t already beyond the line.

Having already spent 10 days restricted to fourth official duties this month following two errors of judgement as the VAR official which resulted in Jan Bednarek and Tomas Soucek being wrongly red carded, even with the benefit of countless replays, Mason is set for an more prolonged period on the sidelines. At this point, his confidence looks so shot that he probably should not be trusted with the substitutes board.

Mason gave Brighton a readymade excuse for their defeat but, like the referee, they too dug their own grave at The Hawthorns.

At this point, it’s reasonable to wonder whether Brighton might ever score again. After battering Crystal Palace 1-2 on Monday night, their profligacy continued in the West Midlands, failing to score with 15 shots, that included two penalties which struck different parts of the goal frame.

Their defeat to Palace triggered a debate over the merit of xG stats, which suggest Potter should not be overly concerned. They are creating plenty of openings. To some, Brighton have just been unlucky.

At the AmEx had Brighton’s productivity been in line with their xG total, then they would be expected to have more home points than any other Premier League team. They should have 27 points; they have 10.

Home and away, they remain a point short of 27. Missed sitters in both halves in addition to a couple of penalties could leave Brighton only a point above the bottom three come the end of the weekend.

Expected or not, a relegation battle looms.