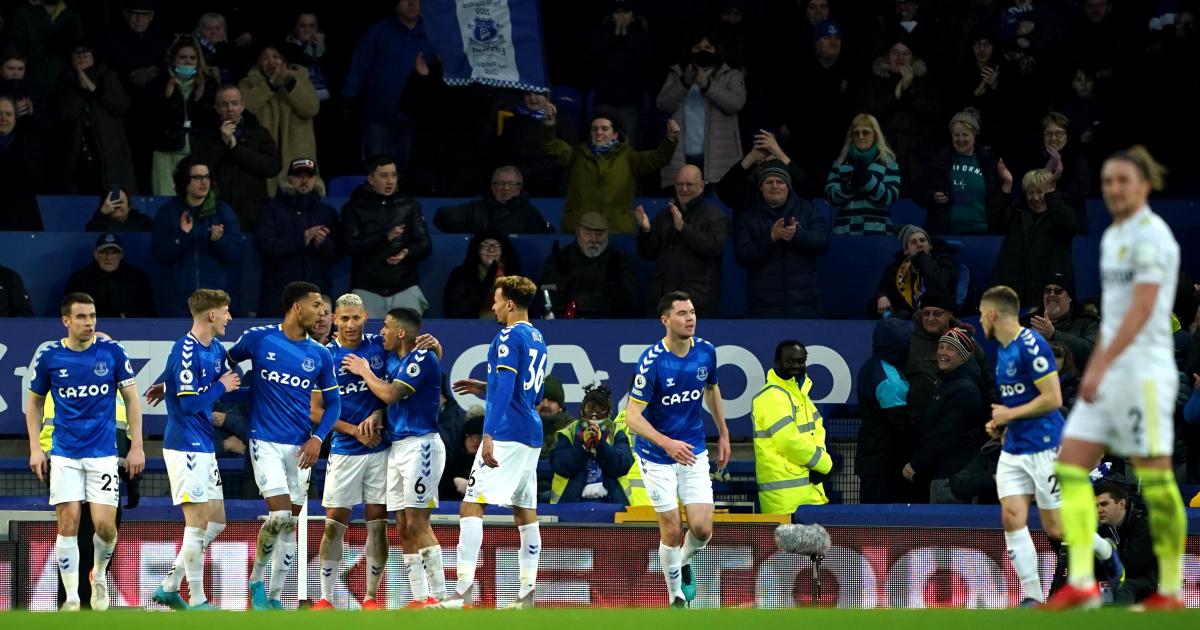 The result was all important for #FrankLampardsEverton, but this was a performance of real substance as well.

We made the classic mistake today of failing to change the channel after the Manchester United-Southampton game had finished.

This meant we found ourselves half-watching BT Score, which is a thing you must never do even by half. Everton’s rip-roaring start to this cracking dismantling of a discombobulated Leeds led to a flurry of mentions of “Frank Lampard’s Everton”. We counted three in five minutes from Robbie Savage between the first and second goal of an excellent first 25 minutes for #FrankLampardsEverton.

We found ourselves wondering whether this is going to become a bit like the hoary old Andy Murray banter, where he’s British if he wins and Scottish if he loses. A fine win for Frank Lampard’s Everton; a grim defeat for Everton. Either way, if we’re going to be forced to notice it every time it happens from now on, then we’re going to inflict it on you as well. Sorry about that.

This was very much a Frank Lampard’s Everton day. The team were excellent, and the fast start left Leeds reeling and unable to recover. Leeds’ defending can often become fraught and the combination of Lampard’s progressive selection, his players’ response to his instructions and Leeds’ corresponding slow, confused start to the game compounded by an injury to Stuart Dallas ended this game as a contest inside the first quarter of the match. It was a fairly desperate afternoon all round for Leeds, defensively all at sea and relying on the sort of desperate, last-ditch interventions that highlight full commitment to the cause but that you really would rather see not quite so much of.

It was a hugely encouraging Everton performance, and much needed after their midweek setback. They are clearly a work in progress after the soul-sucking joylessness of Rafa Benitez’s reign and there are going to be plenty of missteps along the way. But days like this one should come along often enough to keep things sweet enough. Even an even split between “Frank Lampard’s Everton” and “Everton” should do the trick.

But this was a game where the performance was a welcome bonus because the result was all important. And it’s the result that makes Lampard and Everton the early winners; even had they scraped the spawniest of 1-0 wins in a game they were dominated in, it would have been enough.

Because that league table looks a whole lot better now. Defeat today would have left Everton mired in a bottom five with the dregs and facing a nasty-looking gap to the teams above them. It would have raised the prospect of spending the next few months probably not getting relegated but having to worry about it more than is pleasant. Now they’ve reopened a gap on the bottom three – Watford’s home defeat to Brighton adding to Everton’s fine day – and brought Leeds and Brentford back into it. Points between you and the relegation zone are obviously good, but it doesn’t hurt to put more bodies between you and the trapdoor either; Everton are now in a position to do that.