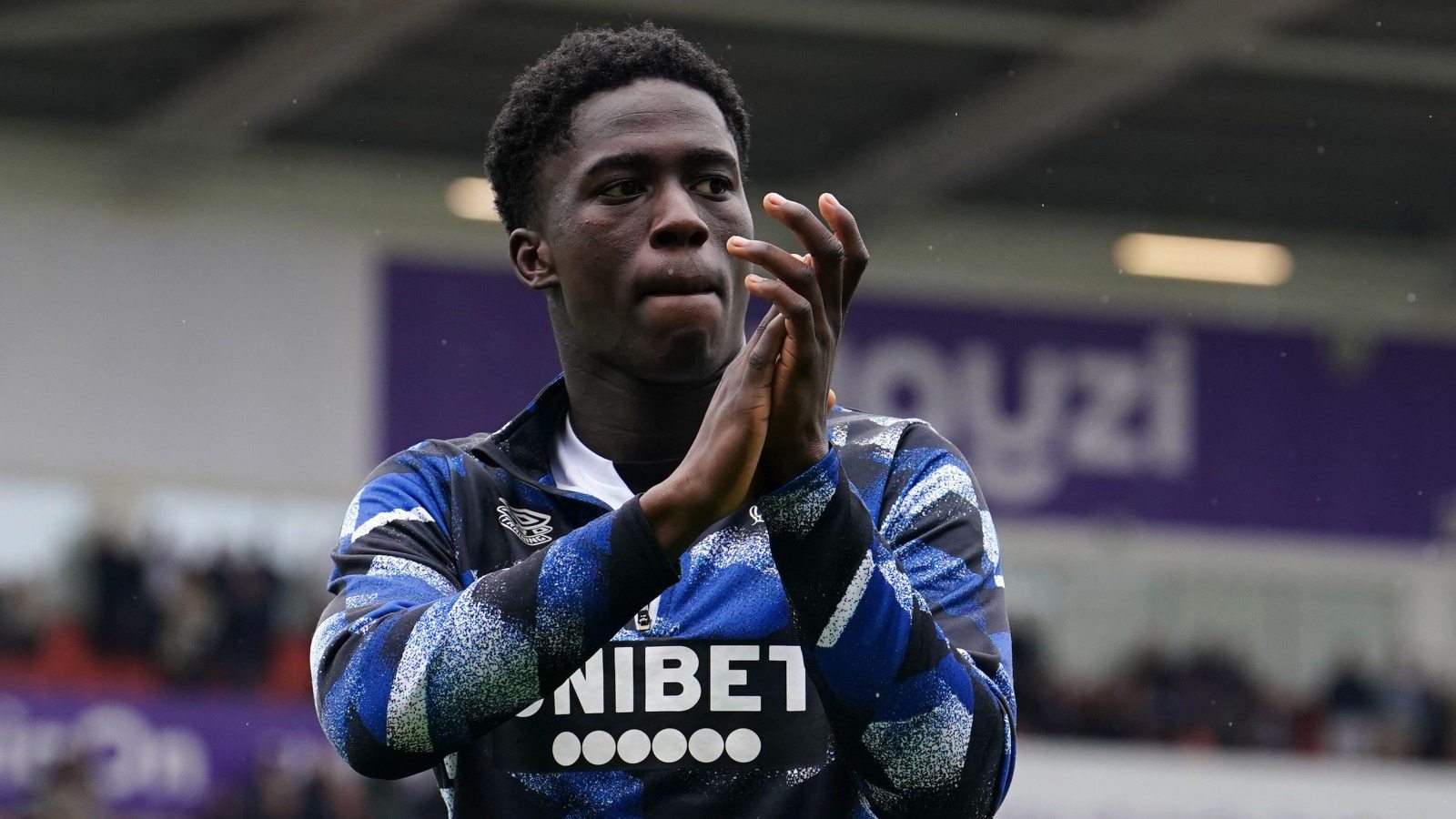 Crystal Palace have announced teenage winger Malcolm Ebiowei is to join them on a five-year deal from July 1 when his contract with Derby expires.

The 18-year-old was handed his Rams debut in February and ended up making 16 appearances in the Sky Bet Championship last term, with his first goal coming in April.

Prior to joining Derby – who went into administration at the start of last season and ended it relegated – in 2021, Ebiowei had youth spells with Arsenal and Rangers.

He told Palace’s official website: “I’d like to thank everyone at Derby County for their incredible support over the last year or so, and for giving me the opportunity to show what I can do on the field, and I’d also like to thank the fans for their encouragement especially given the circumstances of last season.

“As everyone is aware the situation is very uncertain at Derby, so it was important for me to secure my long-term future.

“I’m incredibly excited about the prospect of joining Palace, as they have an incredible squad and huge potential. I very much hope to contribute positively to the team this season.”

Palace chairman Steve Parish said of Ebiowei, who has represented England and the Netherlands at youth level: “I’m delighted that Malcolm has chosen Crystal Palace as the best place to continue his development, following his impressive breakthrough into senior football in recent months.

“He is a highly coveted young player, and we very much expect to provide a platform for him to flourish at the highest level.”

The teenager will join us on July 1st.#CPFC

The news came shortly after Liam Rosenior was named the Rams’ interim manager, having previously been assistant to Wayne Rooney, who stepped down as boss on Friday.

A statement from joint administrators Quantuma then confirmed local property developer Clowes had been granted preferred bidder status, with the aim being to complete a takeover by Wednesday.

On Friday the joint administrators had announced Clowes Developments Ltd had purchased Pride Park, issued an interim loan to the club, and would be submitting a bid to buy them.

And a spokesperson for Quantuma said in a statement on Sunday: “Over the course of the last day or so, the joint administrators have continued positive discussions with Derbyshire based property group Clowes Developments (UK) Ltd which resulted in a credible and acceptable offer being submitted.

“Discussions in respect of this offer, which complies with the EFL Insolvency Policy, have taken place with a range of stakeholders.

“All parties are now working hard to conclude what is still a complex legal transaction within a very short timeframe. Once concluded, the transaction will enable the club to move forward and prepare for the upcoming season out of administration.

“It will also ensure that Pride Park Stadium and the club are under the control of a new, local owner with the commitment and resources to enable the club to move forward with a clean slate. The offer also provides the best return for creditors and enables the joint administrators to fulfil their statutory duties and will ensure that there are no further points deductions levied against the club once it is out of administration.

“The acceptance of Clowes’ offer, and the entering into a period of exclusivity means the joint administrators are now prohibited from continuing discussions with other parties who had indicated an interest in acquiring the club. The main focus is now on concluding the transaction with Clowes within the targeted timeframe.”

Clowes has emerged as the potential new owner after American businessman Chris Kirchner withdrew his offer to buy the club.

Derby were were put into administration at the start of last season and subsequently relegated from the Sky Bet Championship after being hit with a combined 21-point deduction.

Rooney, having been in charge for a year and a half and on the back of leading a valiant fight against the drop, stepped down saying he felt “the club now needs to be led by someone with fresh energy and not affected by the events that have happened over the last 18 months”.

Regarding Rosenior’s interim appointment, Derby said in a statement on their official website: “Derby’s players will return to Moor Farm training ground on Monday morning to start pre-season training and Rosenior will head up preparations for the upcoming 2022-23 League One campaign.

“Rosenior, 37, will be supported by the existing first-team backroom staff.”