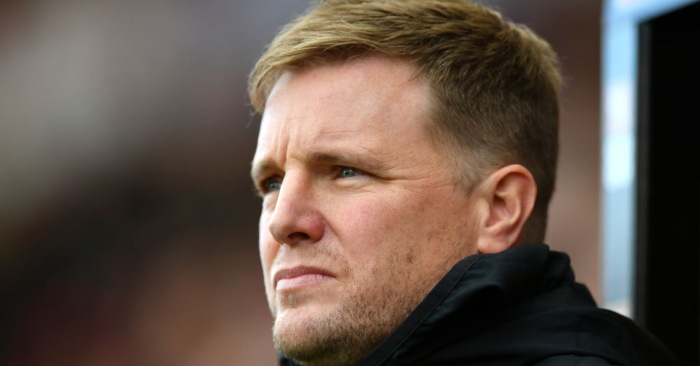 Sunday afternoon was aesthetically a nightmare for Eddie Howe. Practically, the 0-3 loss to Watford made Bournemouth’s future look very bleak. The subliminal dynamics were much more chastening, though. Being out-passed and out-played on your own pitch is never good, but when it happens at the hand of Nigel Pearson it’s worse.

Not because Pearson is a bad coach. He’s a good one, actually, and someone whose abilities have been done a disservice over the years. But the optics are difficult. Since Bournemouth’s promotion, Howe has been allowed to exist in a British head-coaching category all of his own, quite separate from the realm of Pardew, Allardyce and the rest. Here, though, he was being made to look decidedly limited and by one of those British footballing characters with whom he’s supposed to contrast so favourably.

Howe is meant to be the bright one. The one whose employment does not depend on some ludicrous cronyism or a chairman’s fear of umlauts and accents. He’s smart and engaging, he pays attention to detail and, for the most part, his Bournemouth have been a pleasure to watch.

But they’ve always come with a nest of asterisks. Their seasons have always involved long, barren runs. Their defending has never really been secure or looked like becoming so. And, when their confidence drops, they’re prone to sterile, unimaginative football. Bournemouth seem to suffer that period at roughly the same time every year. Prior to 2020, though, it was never to the detriment of Howe’s reputation. This time, it very much has been.

Earlier this week, Oliver Kay wrote a smart and incisive article for The Athletic about Howe. He took umbrage with the quick revisionism and the eagerness to portray him now as some kind of false prophet. Some of that criticism is reasonable. As Sarah Winterburn wrote over the weekend, Bournemouth’s transfer record really doesn’t bear much scrutiny. But other parts of that criticism, argues the article, betray something quite strange about the way British managers are treated.

‘The English football community has a peculiar distrust of those coaches who, like Howe, come across as studious and speak in earnest tones rather than conforming to certain archetypes.’

This is a fascinating topic, because it has so many variations. Chris Wilder, for instance, is doomed to be treated as a rag-and-bone, long-ball merchant on account of how he speaks and where he comes from. Nigel Pearson, as discussed above, has been reduced to a gruff simpleton because of that notorious press conference a few years ago.

And Howe, as Oli Kay suggests, is subject to suspicion on account of not quite fitting his costume. He was a journeyman player with a formulaic, typical upbringing and yet he wears these airs and graces and seems to coach with a resting pulse rate. The picture isn’t quite right, the Proper Football DNA is not instructing a shouty, sweary stereotype.

And because of that, his accomplishments to this point aren’t really being trusted. The various truisms discovered about the game during the modern era aren’t being factored into this equation as they should be.

What’s the matter with Bournemouth?

Maybe their downturn is a symptom of what the Premier League really is – a competition in which aspiration can only survive for so long. There are many issues for Howe at the moment – not least that near-total injury list at Dean Court  – but perhaps one of them is that there really is nowhere else for a side like his to go. Promotion was a wonderful achievement. Survival at the higher level over several seasons was an even finer accomplishment. But what is the objective now, if not just for the players to keep churning their legs and hoping to keep the water beneath their chins.

That’s a simplification, of course. Bournemouth could score more goals, concede fewer, and perhaps even flirt with winning a cup or qualifying for Europe. What characterises their existence, though, must surely be an increasing sense of futility. What are they striving towards other than just vague statistical improvements?

It feels like we’ve been here before. With Stoke, Swansea, West Brom, Charlton. Often dysfunction is ultimately responsible for claiming a Premier League life, but that process always seems to begin with the vague suggestion that a team is tired of the struggle. That, while it likes being in the top division and enjoys the revenues and profile, the club loses faith in what it’s trying to pursue and becomes worn out by the strain of surviving. Then come the bad decisions, the awful transfers and, most likely, the freefall.

Ultimately, over time, the collective recognition of that kind of situation will dull the atmosphere within a club. Perhaps not in a major way, with players outwardly sulking or demanding transfers, but in the sense that they become less receptive. What worked in the past perhaps no longer does. Tricks and techniques used to rediscover form no longer have the same effect. Players start to ask why they’re doing something.

It’s a situation worth considering from a head coach’s perspective, too. If someone like Howe becomes aware of a glass ceiling, how might that change the way he communicates? Again, that’s not to say that he would become sarcastic or facetious, but just the tone of his message might be deadened in a critical way. If the players sense that change, the situation can quickly become terminal.

That’s almost exactly what seems to have happened to Mauricio Pochettino at Tottenham. There’s no suggestion of anything similar happening at Bournemouth, but the early warning signs are there – the tension in the puppet strings isn’t quite the same and Howe doesn’t appear to have the same control. No matter what he says to press or privately to his players, week to week his side are getting worse. It’s like a disease.

He should bear little responsibility for that. His players likely aren’t to blame, either. Perhaps one of the realities of modern football and a consequence of its restrictions is that all coaching attributes have a half-life and that, at almost every club beyond the gilded few, a manager’s hold on a team can never be permanent.

Implied within that, of course, is that there is most definitely a time to move on. Not to be sacked or resign in a sulk, but just a point at which everyone’s best interests might be represented by a total recalibration of the internal dynamics. Bournemouth can still be Bournemouth, hopefully still in the Premier League, but maybe the time has come for them to be a vehicle for someone else’s ambitions.