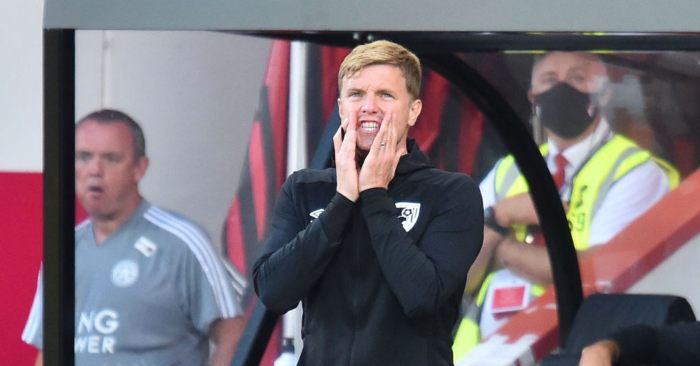 Eddie Howe has left his role as Bournemouth manager by mutual consent, the Sky Bet Championship club have announced.

The 42-year-old was unable to keep the Cherries in the Premier League, with relegation confirmed on the final day despite a 3-1 victory at Everton.

Howe departs Bournemouth after more than 450 games in charge across two spells at the Vitality Stadium and admitted the time was right for a change in an open letter to supporters.

It read: “Having spent a total of 25 years with the club as both a player and a manager, this decision – made together with the club – is one of the hardest I’ve ever had to make.

“However, although the affection and love I have for this football club will always remain, we collectively feel that now is the right time for the club to go in a new direction.

“Bournemouth will always be in my heart, but I firmly believe that now is the right time for the club to have a change.”

The former defender initially took charge of the south-coast club in December 2008 on a caretaker basis with Bournemouth bottom of League Two.

After leading them to safety, he achieved promotion the following campaign before he left to join Burnley in 2011.

Howe returned a year later and guided the Cherries to two more promotions, with the club playing in the Premier League for the first time in their history.

Chief executive Neill Blake said: “Eddie Howe is synonymous with this football club, both as a player and a manager, and that will never change.

“He is quite simply an AFC Bournemouth legend, having helped transform the identity and history of the club.”

Howe made over 300 appearances as a player for Bournemouth across two spells before he was forced to retire in 2007.

Cherries chief executive Blake added: “Myself, our owner Maxim Demin and the board’s gratitude and appreciation for Eddie’s achievements cannot and will never be underestimated.

“A decision like this cannot be taken lightly, which is why this has been discussed together at length over the past few days. It is even harder given our close personal friendship.

“We wish Eddie well for whatever the future holds and hope he enjoys some much-deserved and well-earned time with his family.”

In his open letter, Howe heaped praise on the fans and also revealed he will take “some time away” to spend with his family.

“You helped the club survive in its darkest hour and deserve every success,” the 42-year-old said.

“I now join you as a Bournemouth supporter and will be willing the club on in what I am sure will be a successful future.

“I’ll now be taking some time away during the summer break to enjoy some quality time with my family and I am looking forward to the next chapter in my life.”

Bournemouth defender Steve Cook paid tribute to Howe on Twitter for allowing him to realise a boyhood dream.

“Can’t really put the emotions of the last week into words,” he said. “Now tonight adds to the ‘end of an era’.

“I can’t quite put it into words but I can only thank the manager. He gave me the chance to play in the Premier League which is every boys dream.

“An amazing eight years I had playing under him and something I couldn’t imagine changing.

“Two promotions, a championship winners medal and five years in the best league in the world. Thanks for the memories.”