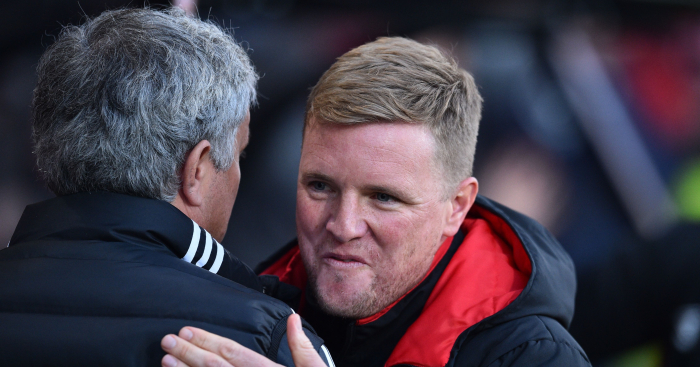 Howe is he the right man for Man United?
There have been times when bemoaning Eddie Howe’s lack of progression from Bournemouth would be apt, but this…

Over to you, Martin Samuel…

‘In this of all over-achieving seasons, Jeff Mostyn knows he is getting lucky. As chairman of Bournemouth in any other era of English football he would be looking for a new manager by now. Eddie Howe would be long gone, tempted away by a bigger club.’

‘In this of all over achieving seasons’? Was this written several weeks ago, found on a lost file and published anyway? Bournemouth are now ninth – below Leicester – and a full ten points behind the Champions League places. It’s a good season but Bournemouth are doing only marginally better than two seasons ago. Trees remain rooted in the ground.

‘Instead, he remains: the longest-serving manager in the Premier League, and the third most enduring across four divisions. Only Jim Bentley at Morecambe and Gareth Ainsworth of Wycombe have outlasted Howe’s six years and 48 days at Bournemouth, but the elite are never going to come looking in the lower leagues for coaching talent; not anymore.

‘They used to search there and across the ranks of overachievers in the top division, though, for a manager doing an impressive job in inauspicious circumstances. Ron Atkinson got the position at Manchester United because he came third, then fourth, with West Bromwich Albion.’

And Ron Atkinson got the position because Manchester United had just finished eighth. They did not have to ‘search’ anywhere; they chose a manager from a club that had done rather a lot better than themselves.

Oh and ‘third, then fourth’ is a little better than 16th, ninth and 12th, as achieved by the impressive but absolutely-not-discriminated-against Eddie Howe.

‘Dave Sexton, another United appointment, had narrowly missed out on the league title with Queens Park Rangers. George Graham went to Arsenal having won promotion with Millwall. Bruce Rioch succeeded him because creditable spells with Middlesbrough, Millwall and Bolton counted for something. As did Howard Kendall’s time at Blackburn Rovers; or Howard Wilkinson’s rebuilding of Sheffield Wednesday; or Glenn Hoddle’s success with Swindon.’

Mediawatch is not sure that citing Dave Sexton is an excellent idea when it comes to asking why Manchester United do not look at over-achieving clubs for their managers. Oh and somebody might want to point out that it’s little more than five years since United did appoint a British manager who had done ‘an impressive job in inauspicious circumstances’. How did that one work out again?

‘Yet if Manchester United do tire of Jose Mourinho at the end of this season – and failure to qualify for the Champions League has done for his two predecessors – would Howe get so much as a cursory second glance? It hasn’t got him a sniff so far. Chelsea and Arsenal replaced their managers this summer and he didn’t get a look in.’

Probably because he had just finished 12th in the Premier League, as opposed to first in Ligue Un or second in Serie A. It sounds crazy but maybe Unai Emery and Maurizio Sarri have a little more experience of managing elite players.

‘Chelsea haven’t appointed an English manager since Roman Abramovich took over; the same with Sheikh Mansour and Manchester City. If Howe’s name is mentioned it is in connection with mid-table clubs, as a stepping stone, to see if he could handle being in a slightly more advantageous position to now.’

Manchester City have only appointed three managers since Sheikh Mansour took over – and all three have won the Premier League. We’re not sure that’s such a wonderful example.

How odd that Samuel does not mention Liverpool and Tottenham, who have both appointed British managers in the last seven years, with the former very much rewarding Brendan Rodgers, who was ‘doing an impressive job in inauspicious circumstances’, as they did previously with Roy Hodgson.

‘Howe would, in so many ways, be a perfect fit at Manchester United. Without doubt he improves players – and he plays good football, fearlessly, no matter the opposition. Bournemouth did not beat Manchester City on Saturday, but they had as good a go at it as Manchester United did recently, and on a fraction of the resources. Pep Guardiola says privately that Howe is the English coach he most admires, particularly his commitment to playing an attacking style and the way he sets out his team.’

There are only four English coaches in the Premier League. As the others are Hodgson, Neil Warnock and Sean Dyche, he can probably stop whispering in corners and be loud and proud in his admiration for Howe.

And the problem is that he did not beat City, or Arsenal, or Manchester United themselves in recent weeks. Indeed, he has only won five of 44 matches against Big Six opposition in the Premier League. Save your cries of anti-English bias for when Howe’s team is producing something other than mid-table results.

‘Howe has never handled a squad of world class players, runs one counter argument, never played in the Champions League, never set out a team against Real Madrid. But how to get that experience at Bournemouth – even at Everton? Isn’t what he is doing on the south coast evidence of transferable skills? What if Howe was precisely the type of brave soul to get Manchester United talked about the way they used to be?’

The day that United appoint a foreign manager who has just finished 12th – while ignoring an English manager who has won three Champions Leagues – we will talk about anti-English bias.

Stan Collymore, Daily Mirror, December 4: ‘You only have to look at the statistics that emerged after Saturday’s draw with Southampton – those which said his United side are virtually bottom of every table in terms of sprints and distances covered – to realise he is done in Manchester. Finished.’

That 2-2 draw with Southampton really has hit Stan Collymore hard.

Stop (sort of) making sense
Mediawatch’s favourite Paul Merson line from his midweek predictions on Sky Sports is undoubtedly that Crystal Palace ‘should’ve beat Burnley by a million’, but we also have love in our hearts for any ‘expert’ who is so surprised by the Premier League table.

‘It shocked me the other day when Jeff Stelling said on Soccer Saturday that Burnley were the favourites for relegation. However, when they go to Palace and get beat like they did it sort of makes sense.’

And here is Merson on Tottenham:

‘Tottenham find themselves out of the top four now and they’ve got to bounce back from a bad afternoon at the Emirates. It’s funny how this league changes because one week we are talking about title contenders but now they are out of the Champions League places. The Premier League is ruthless!’

‘We’ were talking about them as title contenders? Were ‘we’ balls. You don’t speak for us…